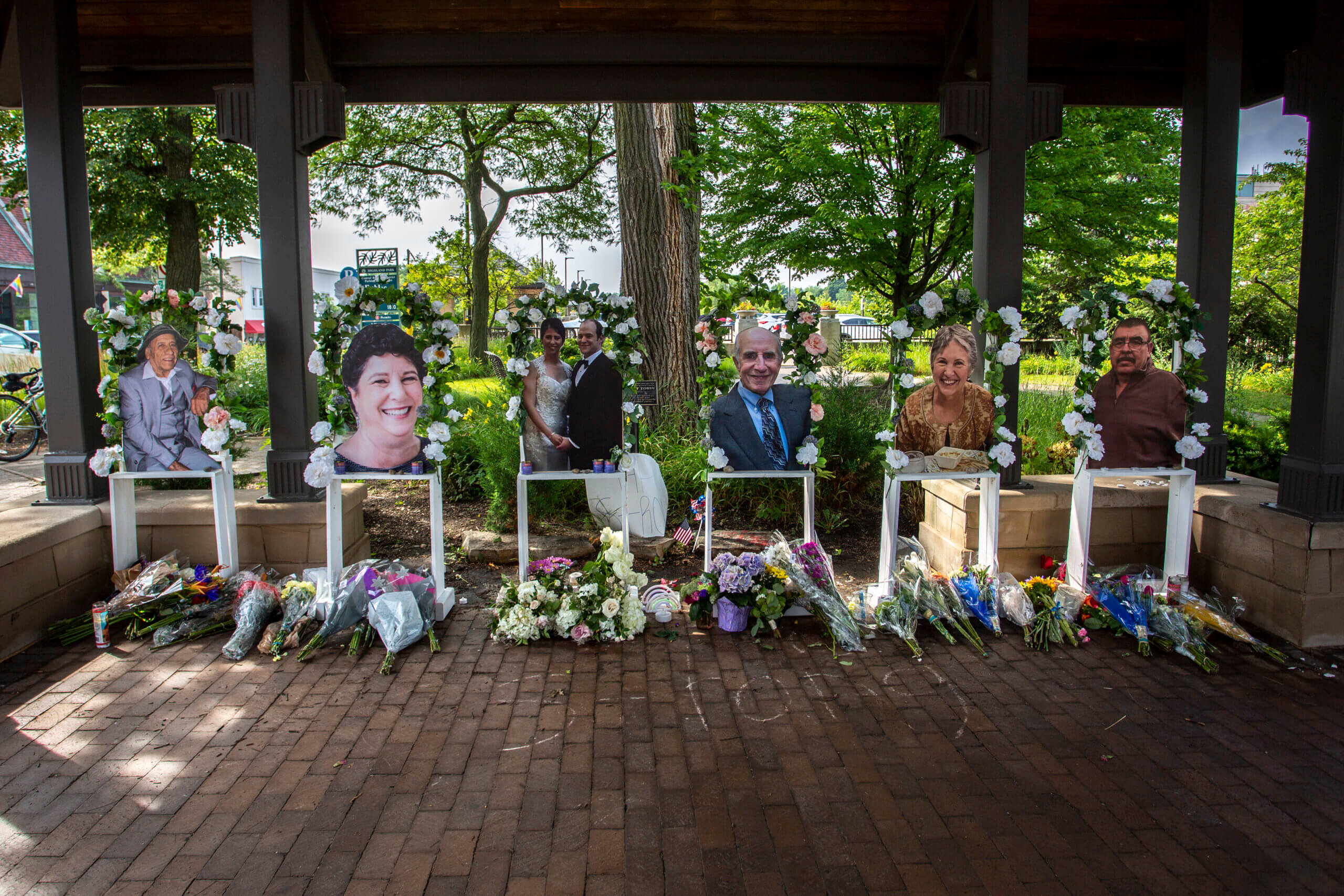 This couldn’t happen anywhere: How coverage of the shooting failed Highland Park

The first moments after finding out about a shooting in my hometown felt like living in slow motion. My hands shook as I saw “Highland Park” trending on Twitter. When I found out why, I  desperately tried to call my wife, whose parents still live there.

Then I tried calling her parents, waiting shakily for them to pick up, knowing that the shooter was still out there. Upon hearing that they were on their way to the parade when the shooting occurred thanks to my mother in law’s tennis class, I held my wife as she cried. We broke the story to our daughter, and I held her for an hour as we talked it out while her mother took a break to go cry and speak to her parents more.

When the police identified the alleged shooter, I felt a familiar feeling deep in my bones. Like the thousands of Jews who live and have lived in Highland Park, I immediately had the thought: What if this is about us? It was a feeling that I couldn’t shake.

I moved to Highland Park when I was 10, from a town in Connecticut where my family was the only Jewish one. When I arrived, I was amazed. Suddenly, I was surrounded by people like me. I no longer felt like the only kid that celebrated Yom Kippur and Rosh Hashanah. Everyone took those days off.

Once, one of the Christian kids in my class asked jokingly if anyone would be free to hang out during Passover, and no one responded. That was our life there. A special one, in retrospect, as I once again live in a city with few Jews and feel desperately alone.

I was sure that pundits, writers, the media and our political leaders would note that many of the parade attendees came from the neighboring Latino community, that the population of Highland Park itself is half Jewish, and that Jews historically moved here specifically because they were being turned away from nearby suburbs due to antisemitism.

But that’s not what I saw.

Instead, I saw mainstream media outlets describe Highland Park as an “affluent, mostly white suburb,” and the shooting described as one of those “it could happen anywhere” situations (the vice president said this very line while addressing residents of Highland Park). I listened as the police described the attack as “completely random” (which would make it a profound outlier among mass shootings).

Meanwhile, the Jews pleading for them to talk about our community and how it was affected were completely ignored.

The next day, I found out that the suspect might have earlier targeted the synagogue where I went to Hebrew school — the place where my wife and I got married, where my wife’s parents still go, and where we attend services every time we visit. The suspect had visited the synagogue on Passover, and thankfully, the rabbi made him leave (possibly saving the synagogue itself from becoming a target).

I was sure that the narrative would now change once this horrifying detail came to light.

I should have known better.

The story of the synagogue incident was first written about by Anash, a publication run by and for Chabad Hasidic Jews (the rabbi who turned away the alleged shooter is Chabad Hasidic), and only garnered mainstream attention when Jews on Twitter with a large following, like myself, tweeted about it.

But despite repeated pleas, the framing of this story has remained the same: An affluent, white town experienced a tragedy just like any other American town can experience. It could happen anywhere.

Wanting to cut through the noise and ignorance I was witnessing, I pitched a story on how properly understanding the community’s population and the suspect’s possible motives could help us better understand this attack. I felt that a mainstream, non-Jewish publication was the best place to address it, so that others could better understand how unheard the Jewish community felt, and how this story could be told better in the future.

By this point, the extremist research community had also unearthed posts by the suspect which were overtly antisemitic and racist. This needed to be told, as did the story of the failure to provide essential context.

The editor didn’t see the angle: He felt that the world sees Jews as white, and had trouble understanding why it was problematic for the town to be described in that way. Without “more” than the suspect having visited a synagogue, he said, there wasn’t enough to call out the media.

A deep feeling of shock welled up in my body as I processed what he was saying. I thanked him for his time, and we hung up.

The experience of worrying for my family’s safety was truly traumatizing. But up until that moment, I had been in research and writing mode, distancing myself from the story in order to make sure that the Jewish story was told.

But hearing an actual editor dismiss the possible connection, I finally felt the weight of the last two days, and of just how broken the narrative around Jews and antisemitism is in this country today.

The coverage, perhaps predictably, didn’t get better. An NPR article quoted experts in online extremism and claimed that the suspect had “no ideological or political bent.”

This was, in essence, a very bad interpretation of the fact that this suspect appears to not be part of an organized hate movement, like the Proud Boys or Patriot Front, but rather part of a more nihilistic group of what can best be described as a mass shooter community, a loose conglomeration of disparate online forums united by hate and a desire for pure chaos, as opposed to groups like QAnon that aim to achieve a specific vision.

I happened to have been in touch with the same experts this NPR article quoted, and I reached out to one of them, Sarah Hightower, an independent researcher who specializes in the far right and online extremist movements, to hear what she thought about the piece.

She was worried about how it had been framed.

“You have this entire community, and they’re scared,” she told me. “And now it looks like they’re essentially being told, ‘Oh no, y’all are overreacting because it’s just edgy white boy shit.’”

She had explained to the writer, and in all of her interviews, that you can’t separate ideology and bigotry from these online subcultures, she told me, and she shared evidence of the suspect’s racist and antisemitic posts in hate forums.

The suspect was part of a “gore forum,” a place for people to post things like beheadings. He was part of the Nazi Catboy movement, which is… hard to explain. He was part of the far-right anime fandom movement. Hightower confirmed that he had posted on an online forum conveying Holocaust denial, overt antisemitism, the desire for a new Holocaust as well as a desire to wipe out Black people and Asian people. His last and only remaining post on Facebook before it was shut down said simply, “You are all sinners.”

Not only was the suspect visible at multiple Trump rallies, but a Highland Park resident who knew of his activity and called him a “known agitator” said he was known for violently attacking counter-protestors and referring to Black Lives Matter supporters as “monkeys.” According to a Facebook post by this resident, she had previously informed the police, who she says did nothing.

While all hateful communities are complex in their own ways, there is a common bigotry that unites and drives them, and too often spills out into real-world attacks.

Each group is propelled by bigotry against the vulnerable, an ideology of destruction, and ideologies built on white and Christian supremacy. The explicit goal is to cause terror and confusion. Like all terrorists, they want vulnerable populations to suffer not just the physical toll of a mass shooting, but the emotional toll that then follows their attacks.

The decentralized nature of online forums allows them to do just that, causing confusion in the media, terror and anger in the vulnerable populations they’re targeting and a general feeling of exhaustion and pain in the country at large.

While we may never fully understand the full motive behind this specific attack, and it would be wrong to label it simply as “antisemitic,” a simple fact remains: The suspect was active in many online breeding grounds for bigoted extremism, he was a known threat to a synagogue in Highland Park, and he had previously expressed hopes to annihilate minority groups.

All the complications and all the nuance in the world won’t do us any good if these facts aren’t acknowledged and learned from.

I cried, I think, not only because of the stress of my trauma. It was because I knew this was coming. I had shared, and then deleted, a tweet only weeks ago saying that I could feel how badly our leaders and media were handling not just the story of antisemitism, but the story of extremism and online extremism in America.

When a mass shooting happens in Buffalo or El Paso, we talk about the affected communities. But we don’t often discuss the interconnection between the disparate-seeming ideologies that place all vulnerable populations in their sights, or that antisemitic conspiracy theories are often tied to the motives of shooters that target other minorities, and vice versa.

We don’t talk often enough about how the current moral panic on the right is partially fueled by conspiracy theories that use classic antisemitic tropes, pushed in mainstream publications like Fox News. These alarms are not being sounded, and it is only after attacks occur that we even care to speak about them (and apparently, in this case, not even then).

Our politicians, our media and our pundits all describe these acts singularly, as if they pop out of nowhere, and often choose one topic, like guns, to focus on, without an awareness that we are talking about a large, decentralized extremist movement that is fueled by a united bigotry, you cannot separate the attack on one minority community from the attacks on others.

What happened with the story of my hometown is just part of a larger symptom of ignorance and a refusal to listen to the vulnerable populations that are pleading to be heard, and acknowledging the hatred that unites these acts of terror. On Twitter and in other places, we are building networks to address this, but without mainstream awareness, we are working against a rising tide.

The post This couldn’t happen anywhere: How coverage of the shooting failed Highland Park appeared first on The Forward.