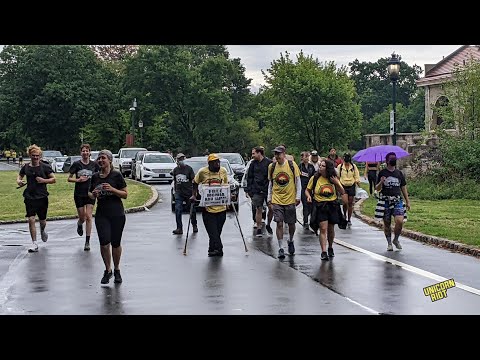 This Is America #174: Building Dual Power with Cooperation Tulsa and Defending Pride in Boise

On this episode, first we speak with Daniel, a member of Cooperation Tulsa, out of Tulsa, Oklahoma. We discuss the group’s current fundraiser to benefit their community center, the greater historical context of Tulsa, the role of the community center in ongoing organizing efforts, and how it relates to another local land and gardening project.

Members of @CoopTulsaOK and @ScissortailAO had a work day yesterday to clean and organize the community center. Look how cozy and inviting the front room is now.

DM us to arrange a time to come down and check out the theory library and enjoy some coffee and other refreshments! pic.twitter.com/CDhw32xPxl

We then speak with two folks who report on the defense of recent Pride celebrations in Boise, Idaho. We talk about the attempts by both the fascist far-Right and the local Republican party to encourage protests and the shutting down LGBTQ events, as well as how people mobilized to defend Pride last weekend, in the face of counter-protests.

We are not sure we have described well enough the impressive work done by Workers Solidarity Federation (@WorkersSolidar1) in the aftermath of the floods in #Pakistan, while the politicians are embroiled in their squabbles and the people suffer.

We then switch to our discussion, where we analyze and discuss current news stories on climate change, how Cooperation Jackson in Mississippi and anarchists in Pakistan are mobilizing to provide mutual aid, the stupidity of “Dark Brandon,” and much more.

But first, let’s get to the news!

In Rhode Island, police violently arrested several Teamsters on a picket line who have been on strike for months, demanding better wages and benefits.

Police violently arrested @Teamsters who have been on our strike for months in #RhodeIsland, demanding better wages + benefits.

"They started hitting us with riot grenades + spray + K-9 units…I’ve been doing this 31 years, never seen anything like it." https://t.co/SfGjw533fI https://t.co/WLOIV4FYDP

Railroad companies and the Biden administration intervened to stop a nationwide railroad strike from popping off this week. A “cooling off” period was set to expire midnight on Friday, which would have allowed a mass strike to cripple the economy and disrupt supply chains.

In California, farm-workers are continuing protests to demand that the governor pass legislation which would make it easier for workers to unionize.

Yesterday, a worker passed out from heat exhaustion and the workers are now chanting "No respect, no work — no cap!" @RaiseUptheSouth pic.twitter.com/QMKEZknCSH

Amazon workers in Stone Mountain, Georgia also walked out on strike on Wednesday, after one worker passed out the day before, due to heat exhaustion.

To kick off the first week of school, our 2nd annual back-to-school party hosted close to 400 neighbours, both young and old, on the lawn of 55 Triller.

Over 250 back-to-school packs and over 50 haircuts were given out to get our kids ready for the first day back. pic.twitter.com/funEKGhYM2

Meanwhile in the Parkdale neighborhood of Toronto, the autonomous tenant and neighborhood group Parkdale Organize hosted its second annual back to school block party. Over 400 neighbors turned out to get free back to school items, hair-cuts, eat food, and enjoy bouncy houses.

Running Down the Walls

Anarchists and revolutionary abolitionists held yearly Running Down the Walls events in Chicago and Philadelphia, with more events scheduled over the coming weeks. In Philadelphia, more than 200 rallied and went on a 5K run to raise money and awareness for the Anarchist Black Cross Warchest which provides support to political prisoners as well as the local chapter of the Malcolm X Grassroots Movement.

Meanwhile in Chicago, Running Down the walls attendees held a rally outside of the Cook County Jail, featuring live bands, before going on a run around the facility, exchanging chants with prisoners on the inside.

#RunningDownTheWalls went down in Chicago 2022, surrounding #CookCountyJail for a day of solidarity actions in support of political prisoners and the movement to #FreeThemAll pic.twitter.com/SKudwGwLAu

Also in political prisoner news, Eric King has been moved to a new facility in Colorado and is in need of letters, write to him at:

Dan Baker’s birthday takes place this month, so write him a letter here:

In Boise, Idaho, despite an alliance of far-Right online grifters, white nationalist talking heads, and the local GOP calling on its supporters to protest, attendees at Pride held firm and defended the event, which reportedly was the largest Pride in Boise in over 30 years. In response to calls from far-Right groups like the Idaho Liberty Dogs, local antifascists and supporters of Pride mobilized to blockade what ended up being a small counter-protest. Check out our interview later in this program for a full report.

Boise delivered a new tactic in their defense of Pride on Sunday.

It was incredibly effective: in this screenshot taken from a hostile video, the event is completely obscured.

Altercations erupt between security at the Basilica of Old St. Pat’s and pro-abortion counterprotests this morning during the monthly clinic defense where an anti-abortion faith group marches to Planned Parenthood to deter patients @nycforabortion pic.twitter.com/32jnIkKjGF

In Connecticut, anarchists and members of the John Brown Gun Club opposed the Proud Boys and other far-Right groups who came out to protest bodily autonomy.

Today local anarchists stood with our community to fight for bodily autonomy and resist far right attempts to silence those who want to fight for that right. Always remember we out number them. pic.twitter.com/qMUSa3yVqU

Mutual Aid in the Face of Disaster

In Jackson, Mississippi, members of Cooperation Jackson have been mobilizing to provide the community at large with drinkable water for the past week. Read more about their mutual aid mobilization and how to support it here.

Scenes from the Water Relief Distribution Wednesday, September, 7, 2022. Our next major relief is going to be Saturday, September 10th at 10 am at 1128 W. Capitol Street, Jackson, MS. Spread the Word. #Justice4Jackson #Solidarity #MutualAid pic.twitter.com/BRhvghDsOo

Abolitionists in Florida held a rally and hung banners over a freeway to mark the anniversary of the Attica prison uprising.

On the full moon of Sept 9th, 3 of us hung banners over highways and busy roads on Duwamish Land in so-called Seattle in honor of the anniversary of the Attica Rebellion and the call to action by @JailLawSpeak. Remember Attica! Remember George Jackson! #AbolitionNow #FreeThemAll pic.twitter.com/gNvUVO3319

According to a communique posted to Rose City Counter-Info:

Overnight, anarchists visited PPB cop Andrew Hearst at his home in Vancouver Washington. A personal vehicle that belongs to Andrew Hearst was discretely sabotaged. If you thought we would forget Quanice Hayes and Merle Hatch, the victims of Andrew Hearst, you are wrong.

Quanice Hayes was only 17, a child, when he was murdered by Andrew Hearst. He was unarmed and was complying with the conflicting orders the pigs were giving him. Andrew Hearst fired three shots, execution style, from close range.

Merle Hatch was having a mental health crisis and was outside the hospital where he had been a patient. Andrew Hearst and other pigs unloaded 19 rounds on Merle Hatch. He was unarmed and holding a broken phone handle.

To every other killer cop who sleeps peacefully: if you think we would forget the people you killed, or forget our anger over time, you will find out the hard way that we always remember. Hiding in your white suburbian house is not going to make you safe. You will never be safe. See you soon.

Also, according to a post on Scenes from the Atlanta Forest, more machinery has been put to the torch. According to the communique:

Various construction machines were torched on a property owned by the city Atlanta. Just north of Intrenchment Creek Park, at Key & Bouldercrest. All further so-called ‘Development’ and ‘Improvement’ of the South Atlanta Forest will be resisted.

Solidarity with warriors and saboteurs!
All power to the Defenders of Weelaunee!

If you value IGD as a revolutionary autonomous media resource in times of crisis and have the means, please sign up to support us monthly! Help autonomous revolutionary media grow into 2022!