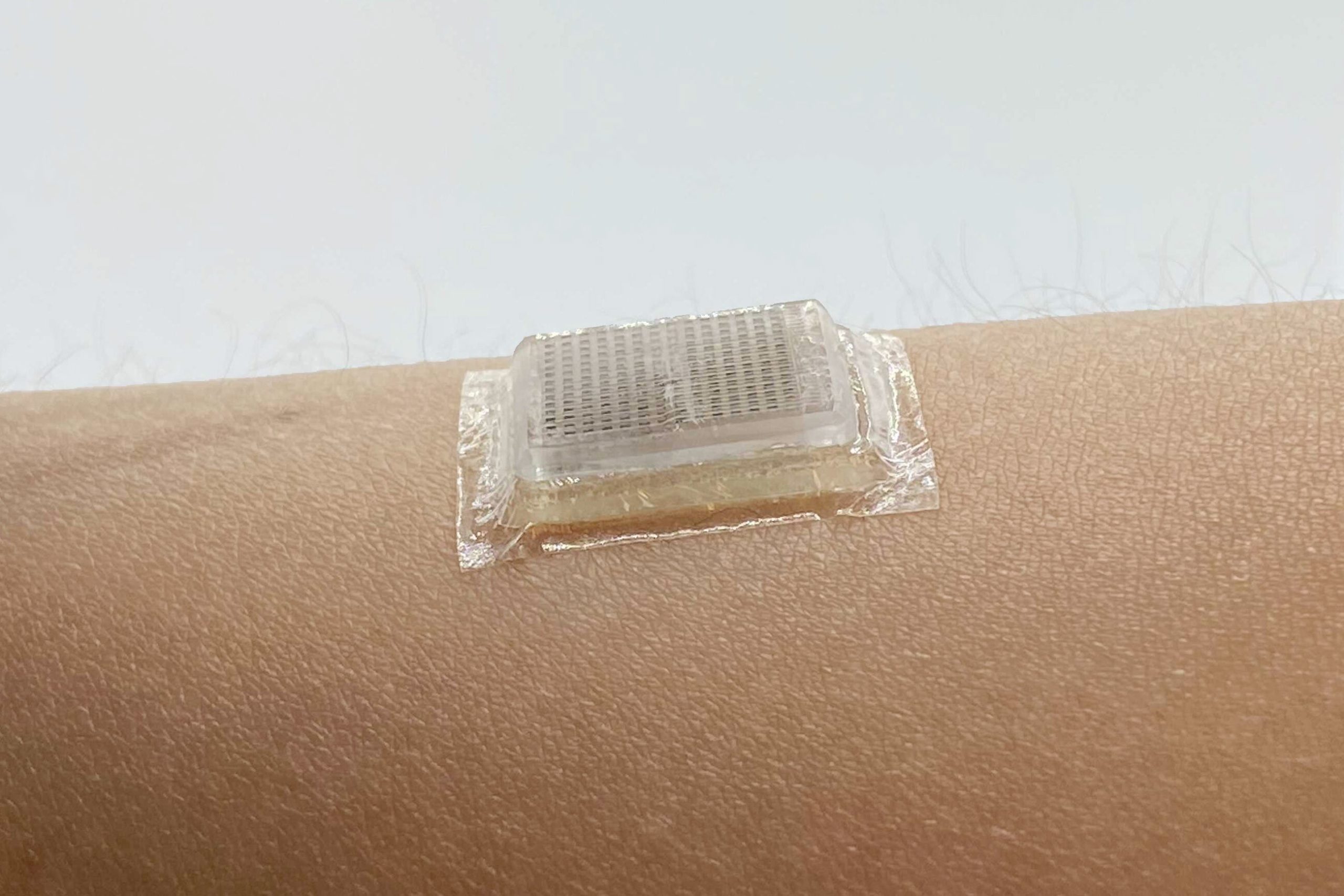 This Sticker Looks Inside the Body

Ultrasound scanners, which image the inside of the human body, are a life-saving medical tool. Now researchers have shrunk the handheld ultrasound probe—which typically requires a highly trained technician to move over the skin—down to a flat chip that is the size of a postage stamp and sticks to the skin with a special bioadhesive. The new device can record high-resolution videos for two days at a stretch, capturing blood vessels and hearts laboring during exercise or stomachs expanding and shrinking as test subjects gulp juice and then digest it.

“The beauty of this is, suddenly, you can adhere this ultrasound probe, this thin ultrasound speaker, to the body over 48 hours,” says Xuanhe Zhao, a mechanical engineer at the Massachusetts Institute of Technology and co-author of a paper describing the new device, which was published in Science on Thursday. By recording still pictures and videos of internal organs during this time, a wearable imaging device could be used to diagnose heart attacks and malignant tumors, test the effectiveness of medications and assess general heart, lung or muscle health. “This can potentially change the paradigm of medical imaging by empowering long-term continuous imaging,” Zhao adds, “and it can change the paradigm of the field of wearable devices.”

Traditional ultrasounds are great at peering beneath the skin without causing damage to the body, but access to such scans is limited. “The conventional handheld ultrasound requires well-trained technicians to put the probe properly on the skin and apply some liquid gel between the probe and skin,” says Nanshu Lu, a mechanical engineer at the University of Texas at Austin, who was not involved in the new research but co-wrote an accompanying analysis in Science. “And as you can imagine, it’s quite tedious and very short-term, very constrained.” Because they require an experienced human operator, Lu explains, these scans are expensive, and they cannot be used in tests where the subject is exercising or putting their body under stress from heat or extreme environments. “Conventional ultrasounds have a lot of limitations,” she says. “If we can make ultrasound sensors wearable and mobile and accessible, it will open a lot of new possibilities.”

Thanks to their potential versatility, other researchers have attempted to make stick-on ultrasound patches. But in order to adhere to soft, stretchy skin, earlier devices were designed to be stretchable themselves. This form factor weakened image quality because it could not accommodate as many transducers—units that, in this case, transform electrical power into sound waves with frequencies too high for human ears to detect. An ultrasound probe sends these waves through a layer of gooey gel into the human body, where they bounce off organs and other internal structures and then return to the transducer array. This converts the mechanical waves back to electrical signals and sends them to a computer for translation into images.

The more transducers, the better the image quality. “It’s very similar to a camera,” explains Philip Tan, an electrical engineer and a graduate student at Lu’s lab at U.T. Austin, who was also not involved with the new study but co-wrote the analysis piece. A stretchy stick-on ultrasound probe, which must be able to flex every time the skin moves, cannot pack as many transducers into the array—and when the wearer moves, the configuration of transducers shifts and makes it difficult to capture stable images.

Instead of making the device itself stretchy, Zhao and his team attached a rigid probe, just three millimeters thick, to a flexible layer of adhesive. This adhesive replaces the gooey liquid placed between a traditional ultrasound wand and the skin, and it is a hybrid of a water-rich polymer called a hydrogel and a rubberlike material called an elastomer. “It is a piece of solid hydrogel containing over 90 percent water, but it is in a solid state like Jell-O,” Zhao says. “We cover the surface of this Jell-O with this very thin membrane of elastomer so that the water inside the Jell-O will not evaporate out.” This bioadhesive not only stuck the probe firmly to the skin for 48 hours, but it also provided a cushioning layer that protected the rigid electronics from the flexing of skin and muscles.

To image different body systems, Zhao’s team tested versions of the probe that produce waves at different frequencies and thus penetrate the body to different depths. For instance, a high frequency such as 10 megahertz might make it to a couple of centimeters beneath the skin. The researchers used this frequency to capture the action of blood vessels and muscles as test subjects shifted from sitting to standing or exercised vigorously. A lower frequency of three megahertz goes deeper, more like six centimeters, to capture internal organs. Using this frequency, the researchers imaged the four chambers of a subject’s heart, and recorded the stomach of another emptying out as their system processed a couple of cups of juice. The researchers also compared the images gathered with their rigid ultrasound probe with those captured by a stretchable ultrasound device, Zhao says. “You can see the resolution of ours is almost one order of magnitude [10 times] higher than the stretchable ultrasound,” he adds.

An imaging device that maintains a continuous watch over specific parts of the body could be used to monitor and diagnose a variety of ailments. Doctors could keep a close eye on the growth of a tumor over time. Someone at high risk of hypertension might wear an ultrasound patch to measure their high blood pressure, alerting them when the pressure spikes or tracking whether a medication is helping. A COVID patient could stay home, knowing that an imaging device would alert them if their illness caused a lung infection severe enough to require hospitalization. Perhaps the most important application could be in the detection and diagnosis of heart attacks. “Cardiovascular disease is … the leading cause of death in the whole world, also in the U.S.,” Zhao says. Heart health is on the radar of other wearable device developers. For instance, smart watches such as the Apple Watch are capable of tracking the electrical signals that indicate heart activity with a so-called electrocardiogram (ECG or EKG). This can be used to diagnose heart attacks—at least in some cases. “There are already studies showing that EKG can only diagnose around 20 percent of heart attacks. The majority of heart attacks actually require imaging modalities, such as ultrasound imaging, to diagnose,” Zhao says. Continuous imaging of a patient’s heart could capture their symptoms and provide an early diagnosis.

“The big selling point of this new device is that it opens new types of medical diagnosis that can’t be done in a static setting,” Tan says. To assess heart health, for instance, it’s helpful to measure the organ’s activity while exercising—but it’s hard to hold an ultrasound wand against a running subject’s goo-covered chest. “With a wearable ultrasound patch, where you wouldn’t have to hold the transducer on the person, they were actually able to show that you’re able to get very high-quality images of the heart even during motion,” Tan adds.

The bioadhesive device is not ready for action yet, however. For one thing, it still has to be physically plugged into a computer that can collect and analyze the data the probe produces. “We connect this probe through a wire to a data acquisition system,” Zhao says. “But my group is working very hard to miniaturize and integrate everything into our wireless device.” He ultimately plans to upgrade the patch with a miniaturized power source and a wireless data-transmission system. This is a feasible goal, Lu and Tan agree, thanks to shrinking electronic components and fabrication methods that allow these features to be combined into an “ultrasound on a chip.” Lu suggests that if the field can attract federal and private investments, such a device could be feasible within five years, although it would still have to earn approval from federal regulators.

Ultimately, ultrasound stickers could join the ranks of wearables that monitor human health, including existing devices that gather information about heart rate, sleep quality and even stress. “Our human body is radiating a lot of a highly personal, highly continuous, distributed and multimodal data about our health, our emotion, our attention, our readiness, and so on. So we’re full of data,” Lu says. “The question is how to get them reliably and continuously.”