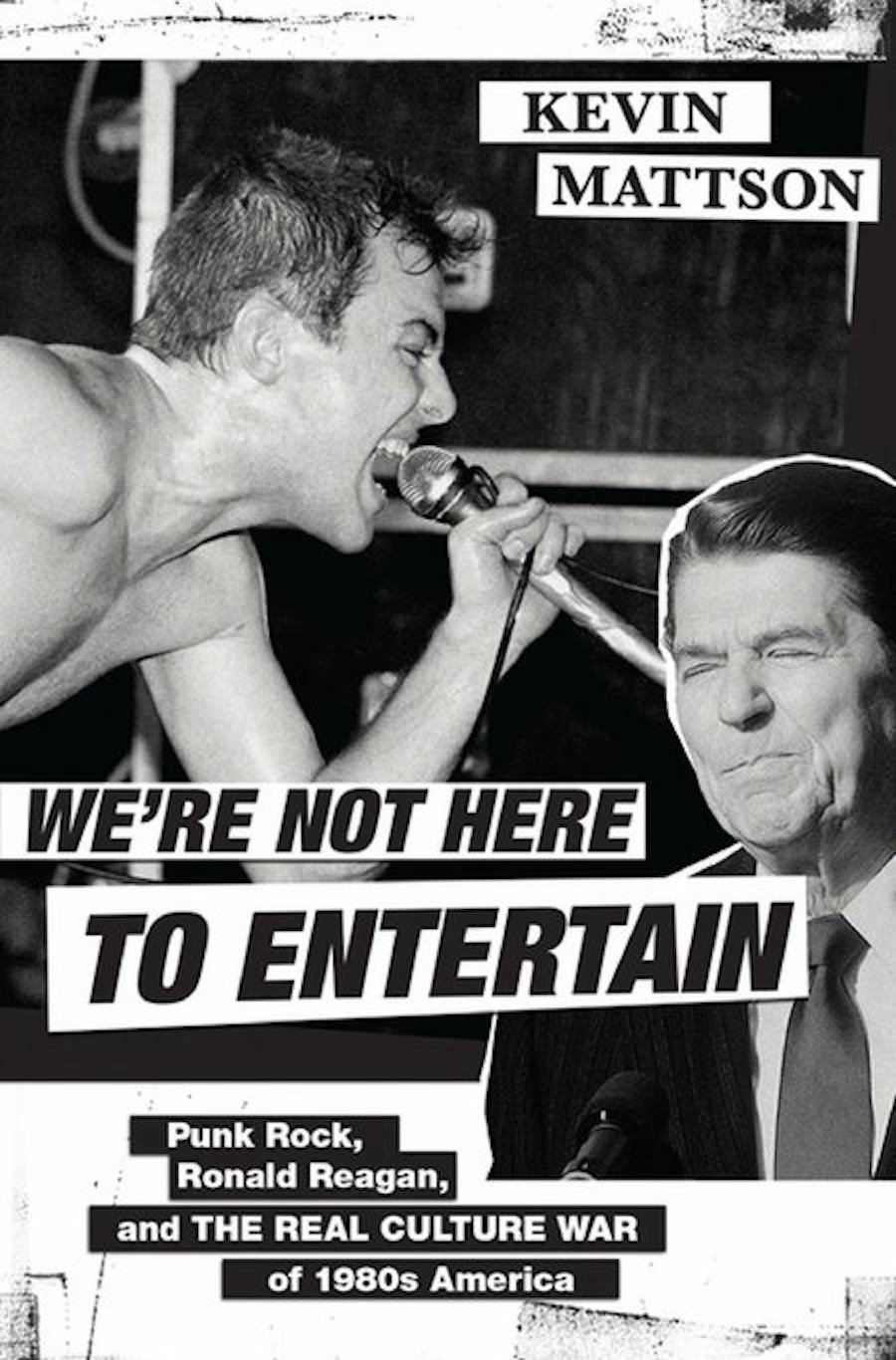 In We’re Not Here to Entertain, Kevin Mattson includes a short description of how a group of punks crashed the 1984 Democratic National Convention at the Moscone Center in the heart of San Francisco and purposefully disrupted plans of then-mayor Diane Feinstein to show a “sanitized version” of the city. Most standard historical accounts of the 1984 convention have failed to mention the protest and so too did most of the leading news coverage of the convention at the time. The punks, nevertheless, made their presence known as they targeted corporations surrounding the convention center such as Bank of America and Wells Fargo. They banged on windows, passed out leaflets, and threw themselves on the ground of major intersections to block traffic. Some of the participants made the links between these corporations and the Democratic Party more explicit and constructed a large “Trojan Donkey” which they “fed ballots, money, and a globe and then excreted missiles, tanks, and skeletons” (205). The provocations led to over 400 arrests and culminated in a performance of several punk artists that drew over 5,000 attendees and led to a violent confrontation with the police.

As this moment reveals, anyone who dares to accuse the creators and fans of 1980s punk as apathetic and apolitical would do well to read Kevin Mattson’s book. We’re Not Here to Entertain exposes the deeply political content of much of the punk music of the early 1980s. Despite the fact that most punkers imagined themselves in diametrical opposition to the ideas of the 1960s, Mattson shows how for many artists and their fans the personal became political.  They brought the culture of punk to bear on issues such as selective service and school prayers that had a direct impact on their lives.  Punk was, to be sure, a musical genre, but Mattson’s book reveals that the movement extended far beyond song lyrics and musical artists alone. It encompassed a larger world that included zines, visual arts, squatters, and political organizations. He shows how together the movement put into practice a DIY politics that blended democratic participation, anti-capitalism, existentialism, and anarchism. The punk movement, Mattson intimates, served both as the next iteration and a rejection of the protest movements of the 1960s. At the same time, it helped create important foundations of the anti-corporate movement of the 1990s that then remerged in the 2000s around Occupy and continue into the present day.

As a political historian, it was refreshing to engage with a political book that operated outside the arena of formal politics without discounting the presence of issues of voting and policy to cultural spaces. For instance, Mattson shows the importance of electoral politics within the punk movement even as participants were ambivalent about whether to vote or not in the 1984 US election. He describes how the editors and readers of several punk zines debated the matter extensively. Some saw voting as a way to protest and oppose Reagan or came to believe that it was an “ethical responsibility” (229) which made opting out as moral defeatism. Others suggested the opposite: that voting reinforced state power and would negate other forms of politics. This discussion reveals the different ideological strands encompassed by punk. It also illuminates that many participants held a nuanced and expansive view of politics and ideology that transcended a simple hatred for Ronald Reagan alone.

Mattson’s decision to frame the book tightly around Ronald Reagan is somewhat unavoidable. Punk musicians, writers, and fans rightly recognized that Reagan was more than just a politician; he was a symbol and accelerant of the fusion of entertainment, politics, and corporate culture in the 1980s. Mattson includes a panoply of examples to make this connection clear. In doing so, however, he gives Reagan too much power and significance. This undermines what might have been a more complete view of the political dimensions and possibilities of punk in the decade Regan served as president. It also leads to not fully spelling out the movement’s links to their 1960s political forebearers. The book’s focus on Reagan reproduces the tendency among many scholars of American politics of the late twentieth century to treat Reagan and the Republicans as the hegemonic, if not the only, political force during the 1980s. It leaves the impressions that the Democrats were paralyzed, not worthy of much attention by punk musicians and their community. Yet, as the “Donkey Trouble” stunt reveals, this was not the case. Ronald Reagan and his politics only lingered in the distant background of this particular part of 1980s political history.

Despite the punk movement’s very deliberate efforts to differentiate themselves from countercultural forebearers, this moment clearly echoes the protests sixteen years earlier outside the 1968 Democratic National Convention in Chicago. At the same time, it also anticipates the protests outside World Trade Organization meeting in Seattle fifteen later in which David Solnit, a key figure in the Democratic protests of 1984, would also play a critical organizer and leadership role. Similarly, it is not hard to see parallels between the punk moment and politics more broadly and the recent resurgence of the left fueled by young people who have congregated around Bernie Sanders two presidential bids, Democratic Socialists of America, and podcasts such as the Chapo Trap House, the voice of the so-called Dirtbag Left. The confrontation outside the convention in 1984 thereby represents an important iteration in the tensions on the left: between liberalism and radicalism, between the Democratic establishment and movement activists of which Mattson himself has been one of the foremost scholars. Unfortunately, in We’re Not Here to Entertain, he has opted mostly to leave it to the reader to draw these types of links, which would go a long way to understanding the movement’s legacy as well as the roots of the new generation of left activism.

Mattson also leaves largely unmentioned the punk movement’s relationship with other leftwing groups of the time. Many of these groups were also turning their anger toward Reagan and organizing against his presidency and policies. They even staged protests in many of the same places that punk musicians held concerts. In fact, near where the Rock Against Reagan musical event took place outside the 1984 Republican National Convention in Dallas, the Association of Community Organizations for Reform Now (ACORN) set up a tent city with over a thousand participants in protest of Reagan administration’s cuts to welfare and other social services. Yet, there is scant evidence the groups had any interaction with one another. I wondered how much of the punk movement’s lack of engagement with groups such as ACORN and serious attention to issues such as welfare and reproductive rights had to do it with the fact that the punkers were almost exclusively white, male, and middle-class. I questioned if their race, gender, and class might have prevented members of the punk movement from seeing the possibility of a presidential candidate such as Jesse Jackson, whose 1984 campaign took up many of the punk movement’s concerns with militarism, nuclear proliferation, and the interventions in Central America. It seems that punk’s strengths in making the personal political might have also served as a key weakness in making the movement work with other identity groups and push for a broader range of social justice issues.

In We’re Not Here to Entertain, Mattson briefly describes the work of the group Positive Force, of which he himself was a member as a high school student. Unlike much of the punk movement, Positive Force sought to broaden the potential protest politics of punk. The group staged a range of different events, from teach-ins about Central America and nuclear arms to protests against a defense contractor trade show. Crucially, the group’s political action also extended to feeding the homeless and other social justice work. Positive Force illustrates perhaps a missed path that the punk movement might have taken in the 1980s. It also could serve as a model for left activism today and in the future for the ways it encompassed a wide-cross coalition of people, issues, and tactics.

In sum, Mattson overemphasizes the significance of Reagan in relation to punk rock in the 1980s. This actually sells short the important contributions of We’re Not Here to Entertain, especially how we might more accurately understanding the full political landscape of the 1980s. Perhaps like any 1980s movie worth its salt, the book needs a sequel.