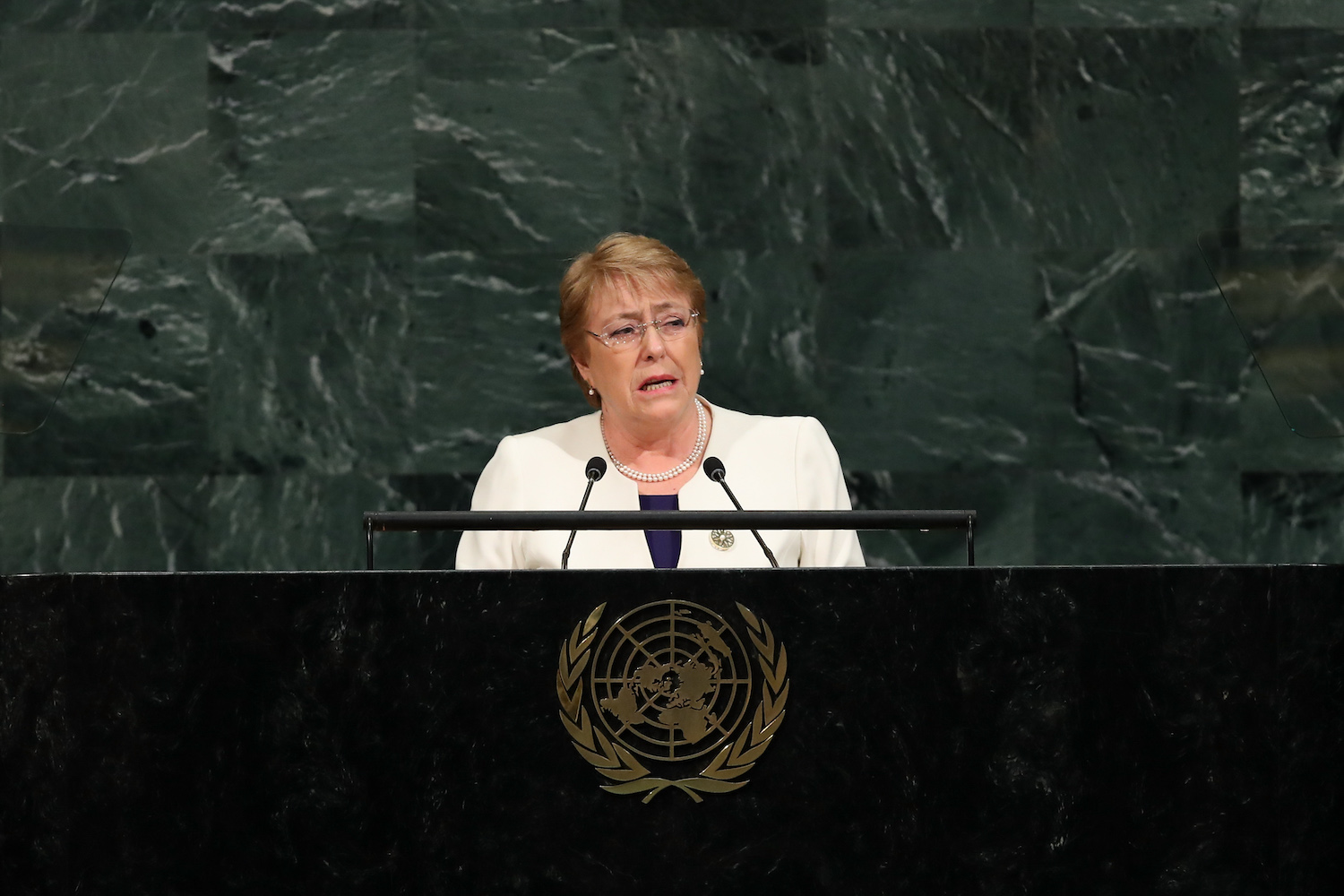 A blistering new human rights assessment has been released after months of delays.

Welcome to today’s Morning Brief, where we’re following a blistering U.N. human rights report on Xinjiang, Afghanistan after one year of Taliban rule, and efforts to protect Zaporizhzhia.

Welcome to today’s Morning Brief, where we’re following a blistering U.N. human rights report on Xinjiang, Afghanistan after one year of Taliban rule, and efforts to protect Zaporizhzhia.

Chinese officials have long worked to quash the much-awaited assessment, which builds on years of evidence of Beijing’s brutal crackdown on as many as 1 million Uyghurs and other ethnic minorities. After almost a year of delays that frustrated activists and human rights organizations, many feared the report would never see the light of day—especially after Bachelet hinted at more delays last week.

In the 46-page report, the U.N. human rights office pulled on a trove of documentation and interviews to allege grave abuses, including torture, forced medical treatment, and sexual violence. Beijing has engaged in “far-reaching, arbitrary and discriminatory restrictions on human rights and fundamental freedoms, in violation of international laws and standards,” the report said.

The report “lays bare the scale and severity of the human rights violations taking place in Xinjiang,” Amnesty International Secretary General Agnès Callamard said in a statement. “The inexcusable delay in releasing this report casts a stain on the [U.N. Human Rights Office’s] record, but this should not deflect from its significance.”

Once the document was public, experts said its conclusions helped explain why Chinese officials were so adamant on blocking the release. The U.N. had previously sent Beijing a draft copy per U.N. procedure, at which point Chinese representatives responded with “substantial input,” Bachelet said.

“Why was Beijing so determined to quash Bachelet’s UN report on its persecution of Uyghurs in Xinjiang. Because she found it ‘may constitute international crimes, in particular crimes against humanity,’” tweeted Ken Roth, the former executive director of Human Rights Watch.

In a 130 page-long response, Beijing criticized the U.N.’s assessment and said it contradicted the Human Rights Office’s mission. “The so-called ‘assessment’ distorts China’s laws and policies, wantonly smears and slanders China, and interferes in China’s internal affairs,” the statement said.

The report’s release will help shape Bachelet’s human rights legacy, which has been marred in recent months over her reluctance to condemn Beijing. After embarking on a rare trip to China in May—she was the first U.N. human rights chief to visit in 17 years—she was widely denounced after she appeared to echo Beijing’s language and her trip fueled new propaganda. Sophie Richardson, Human Rights Watch’s China director, called her visit a “toothless dialogue.”

The United States, which has previously designated China’s abuses a genocide, said it was troubled by China’s attempts to shape her trip. “We are concerned the conditions Beijing authorities imposed on the visit did not enable a complete and independent assessment of the human rights environment in the PRC, including in Xinjiang, where genocide and crimes against humanity are ongoing,” U.S. Secretary of State Antony Blinken said in a statement.

In the face of fierce criticism, Bachelet announced in June that she would not seek another term. Her deputy, Nada Youssef Al Nashif, will stand in for her until U.N. chief António Guterres nominates a successor.

Afghanistan, one year on. The Taliban celebrated the first anniversary of their rule with a flashy parade of military vehicles, helicopters, and fireworks. But not everyone is celebrating: Across Afghanistan, the group’s return to power has shattered lives and fueled desperation, as Stefanie Glinski reported for Foreign Policy.

“We’re all stuck in limbo. Some people have become suicidal. I have panic attacks, mental breakdowns, and a lot of anxiety, something I didn’t experience before,” Zaki Rasoli, a 28 year old Afghan mixed martial artist, told Glinski. “You know, life was good in Kabul before. Fulfilling. Now, there’s no hope left.”

Protecting Zaporizhzhia. A delegation from the International Atomic Energy Agency has touched down in Zaporizhzhia, Ukraine, to inspect the Russian-occupied nuclear plant near the city. Their long-awaited visit comes as the European Union prepares to send millions of iodine pills to Ukraine to help protect nearby residents from potential radiation.

“My mission is a technical mission,” IAEA chief Rafael Grossi told reporters. “It’s a mission that seeks to prevent a nuclear accident.”

Keep an Eye On

Kishida’s nuclear walkback. Japanese Prime Minister Fumio Kishida has expressed his interest in minimizing Japan’s dependence on nuclear energy, just a week after he said the country would ramp up its use. “Our policy of reducing reliance on nuclear power as much as possible has not changed,” he told reporters on Wednesday.

Britain’s new tradition? When Britain’s next prime minister is announced next week, Queen Elizabeth II is expected to appoint the new leader in Scotland—not London, where she appointed the country’s past 14 prime ministers.

One American city wanted to commemorate its 150th anniversary with an exciting ceremony: finally opening up a time capsule that was hidden and buried 50 years ago. The trouble is that nobody in Sheldon, Iowa, knows exactly where the capsule is now, upending the organizers’ original plans and forcing them to recalibrate their celebration.

“We still have every intention of finding it and digging it up,” Ashley Nordahl, director of Sheldon’s Chamber of Commerce, told the Associated Press. “It’s just a little more involved than what we originally had planned.”