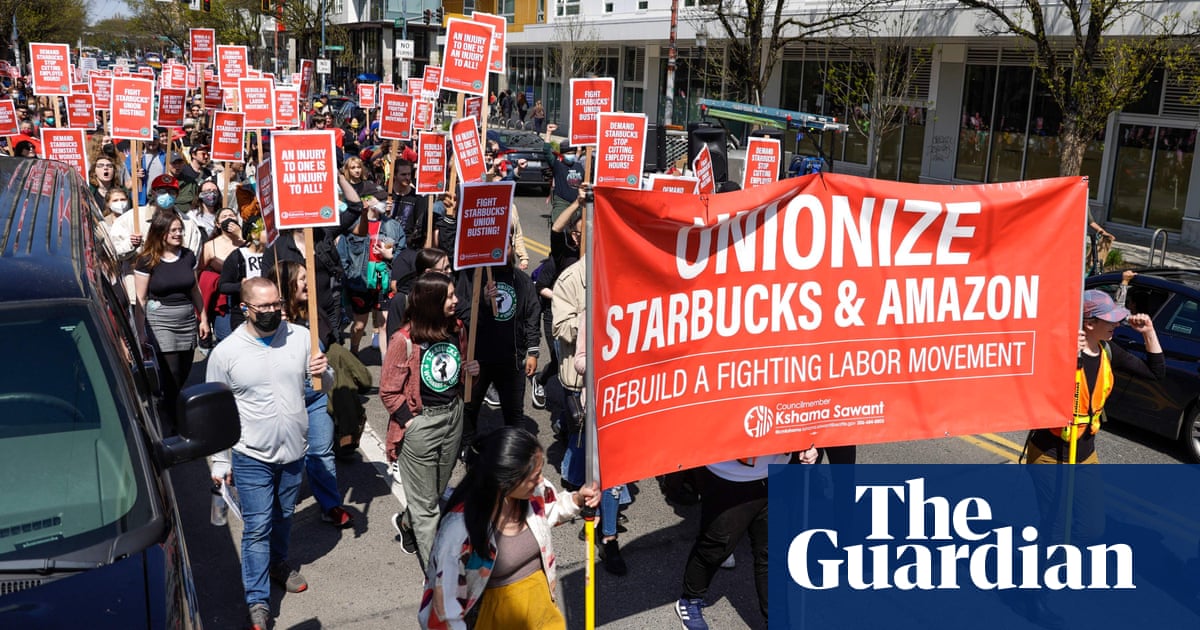 Labor leaders in the US are worried that the federal agency that oversees unionization efforts is approaching a “true crisis” as it struggles with a decade of underfunding and a huge surge in union activity.

Last year saw a 58% jump in the number of union elections as union drives spread at companies including Amazon, Apple, Starbucks and other companies. Some labor leaders say they are worried that the National Labor Relations Board (NLRB) has become so understaffed that it will have a hard time investigating the flood of allegations that Starbucks has violated America’s labor laws hundreds of times in its efforts to crush a historic unionization drive.

Union officials fear that the overstretched NLRB won’t be able to handle all these cases in a timely manner – including cases seeking to win reinstatement of fired pro-union baristas – and that as a result, Starbucks will get the upper hand in beating back the union campaign.

With the labor board’s budget frozen for many years, union leaders voice dismay that congressional Democrats did not increase the NLRB’s funding as part of the Inflation Reduction Act, the landmark climate, healthcare and tax package that Joe Biden signed on Tuesday.

“We’ve been blocked for nine straight years in seeking to increase the NLRB’s funding, and inflation has left its budget 25% behind where it should be,” said Bill Samuel, legislative director of the AFL-CIO, the nation’s main labor federation. “When you take into account the explosion in the NLRB’s workload because of increased organizing, renewed enforcement and the increase in labor law violations, they’ve reached a crisis stage.”

“If there is one beast that Republicans love to starve the most, it’s the part of the government that protects workers’ ability to form unions and bargain collectively,” said Andy Levin, a Michigan Democrat. Levin said he urged the Senate majority leader, Charles Schumer, to increase NLRB funding as part of in the Inflation Reduction Act, but it wasn’t included in the final, carefully negotiated package.

Had NLRB funding been part of the budgetary reconciliation package, it would have needed only a simple majority to pass the Senate – and avoided a Republican filibuster, a move that requires 60 votes to overcome, a nearly insurmountable obstacle for pro-labor legislation when the Democrats have just 50 Senate seats.

“Not getting it into the reconciliation package means we’re not likely to get [increased NLRB funding] at all,” Levin said. “The situation at the NLRB is a true crisis.”

Lynne Fox, president of Workers United, the union that workers at 220 Starbucks have voted to join, said she was worried about the NLRB being underfunded and understaffed. “Obviously it hurts our campaign and every organizing campaign,” Fox said.

The NLRB has brought 19 formal complaints against Starbucks, alleging scores of illegal actions, and it is investigating more than 100 other charges that workers have brought alleging illegalities by Starbucks, including, spying on workers, intimidation and closing stores in retaliation for unionizing. All this has helped create a backlog in NLRB cases, and baristas say that NLRB delays, for instance, on winning reinstatement of fired baristas, could discourage and slow unionization efforts. “It’s obvious that Starbucks is playing the system to their advantage,” Fox said.

A Starbucks spokesperson denied that Starbucks has gamed the system or broken the law: “We have fully honored the process laid out by the NLRB and encouraged our partners to exercise their right to vote in the election to have their voices heard. Any claims of unfair labor practices are categorically false.”

Republican lawmakers strongly oppose raising NLRB funding. Virginia Foxx of North Carolina, the senior Republican on the House education and labor committee, said, “Increasing the NLRB’s annual budget to over $300m is the equivalent of using a spray bottle to put out a grease fire – it’s an inherently stupid idea. Under this administration, the NLRB has become the errand boy for labor unions.”

Larry Cohen, former president of the Communications Workers of America union, lobbied hard behind the scenes to increase NLRB funding in the Inflation Reduction Act – he fears that having a badly underfunded NLRB will make it easier for aggressive anti-union employers to defeat unionization drives. Referring to Starbucks’ CEO, Cohen said, “Howard Schultz is hiring as many lawyers as he can because he knows that delay means defeat. There’s a massive number of unfair labor practice cases involving Starbucks, and understaffing is a real problem.”

The NLRB says that Starbucks workers have filed over 250 unfair labor practice charges against the company. “The NLRB is working day and night on an endless stream of cases,” said Cohen, who long headed the AFL-CIO’s organizing committee. “Howard Schultz knows that Starbucks is not going to win on the merits, that they will only win through delay and more delay.”

Despite not winning a funding increase in the Inflation Reduction Act, the AFL-CIO’s Samuel expressed optimism that the NLRB could win a budget increase through the appropriations process. But many labor supporters are not optimistic because that process could face a Republican filibuster. “The real story is the Republicans are completely unyielding,” Samuel said.

The NLRB union protested at the failure to increase the board’s budget in the Inflation Reduction Act. “We are disappointed to have been snubbed yet again,” the union tweeted. “The IRS needed additional funding to enforce federal tax law, and the NLRB needs the same to enforce federal labor law.”

The Inflation Reduction Act failed to include something else that unions badly wanted: a provision that for the first time would have allowed substantial fines against employers that break the law when they are fighting unions, for instance, by firing workers for supporting unionization. Under current law, employers can’t be fined for violating the National Labor Relations Act.

“It’s unfortunate that the labor board is being handcuffed just when it is turning itself around with new leadership to protect workers who want to unionize and bargain collectively,” the AFL-CIO’s Samuel said. “They’re fighting with one hand tied behind their back.”