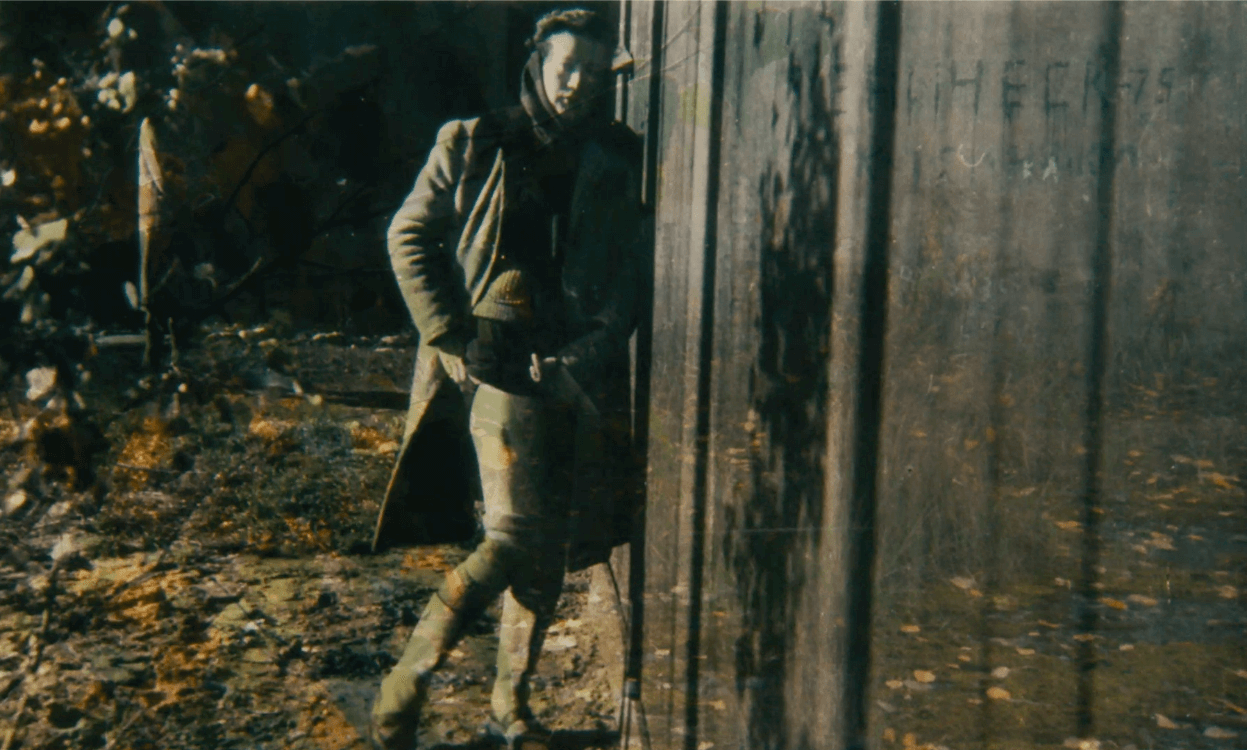 Christophe Cognet’s “From Where They Stood” is not another Holocaust documentary. It is an extraordinary, wholly unfamiliar, unprecedented film centering on largely unknown and clandestinely shot photographs taken by a handful of prisoners in five Nazi concentration camps: Dachau, Mittelbau-Dora, Buchenwald, Auschwitz-Birkenau, and Ravensbrück from the spring of 1943 until the autumn of 1944.

Taking pictures was an act of rebellion and insurgency, whether the inmate was shooting the “brothel,” where female inmates serviced the SS, or the facility where medical experimentation occurred, or even a fellow inmate — if caught these photographers would have been shot on the spot. But they were determined to leave a record of what they had witnessed and experienced.

These photos are clearly a world apart from Nazi propaganda shots, but they also differ from the ones taken by allied forces at the end of the war, who viewed what they saw through a horrified and empathic prism. The fundamental difference is that here the photographers, and often their subjects, who may or may not have known they were being photographed, were prisoners like they were. Within these parameters there was mutual understanding and a shared experience.

The photos were either smuggled out or hidden and retrieved only after the war. Cognet, who has explored Holocaust art in his previous films, uses the shots to retrace the photographers’ footsteps on what remains of the camps in a quest to unearth the circumstances and the personal stories in front of and behind the lens. The film combines historical analysis, archeology and plain old detective work. There is no archival footage or interviews with survivors, just the photos, the filmmaker and the scholars.

The film is broken up into segments, each dedicated to the work of one photographer (Rudolf Cisar at Dachau, Georges Angeli at Buchenwald, and Alberto Errera at Auschwitz, among others). It’s not entirely clear if any of these were professional or even hobbyist photographers in their civilian lives. Some were members of an on-site resistance network, others perhaps not, although most relied on the help of like-minded captives, who stood watch while these pictures were taken. Subterfuge was essential not simply to avoid detection by the Nazi guards, but also fellow prisoners who might report them, thinking it would work in their favor. This was a universe where loyalty and morality had ceased to exist.

The photographers themselves were members of the Sonderkommando, composed mostly of Jewish prisoners, who were forced to aid with the disposal of gas chamber victims.

The grainy, unfocused black-and-white pictures are broad-based in subject matter, including nude women on the way to the gas chambers thinking they were going for showers. In the next shot the women’s corpses are shown piled up outside. The following image portrays SS guards and/or members of the Sonderkommando strolling in and around the bodies, looking as if they are trying to solve some problem, just workmen facing a routine challenge. The researchers speculate that the photographer is shooting through an aperture in the gas chamber itself.

Cameras were snuck out from the barracks known as “Canada,” which contained confiscated property of murdered inmates. The photographers kept the camera concealed at all times, often beneath newspapers, holding them at waist level or in crouching positions. Cameras were rarely, if ever, gripped at eye level.

The photos themselves reveal the angles from which they were shot and, depending on where shadows fell and whether or not trees were barren, the time of day and the season.

Throughout the film, Cognet and his team walk through the former concentration camps that now house memorial museums to track down precisely where and when the shots were taken. In some camps the barracks are still intact; others display reproduced facsimiles, while still others expose nothing more than empty swaths of land, the foundations of buildings barely visible beneath overgrown weeds.

The most unnerving shots are the individual portraits, specifically those of former patients posing for pictures after surviving a medical experiment. In one such procedure Nazi “doctors” injected gangrene into a captive’s open wound to see what would happen. There’s the woman of undiscernible age with her stockings rolled down exposing her scarred legs. Yet she is grinning at the camera. Is it an expression of mockery and accusation in response to the viewer’s voyeurism or, on the contrary, does her look suggest a hint of flirtation, vanity and even a celebration of herself for having endured at all? Or is it all of the above or something else altogether?

With few exceptions the pictures are devoid of sensationalism or sentimentality or indeed any real emotion. They’re technically primitive and matter-of-fact. It’s the viewer who imbues the picture with context, interprets what’s there or, more to the point, what’s not.

The film has no music, no narrative arc, no attempt to vary mood or pacing, and, most central, no catharsis. It raises many questions, not least how photographers use their cameras to create imagery that may embody revelations or distortions or both.

One of the surviving photographers forged an album that for some misfired. On one page he placed a series of shots featuring corpses on their way to the crematorium, one face more twisted and anguished than the next. These portraits encircle a heavily redacted picture of the surrounding landscape bereft of human activity.

The original photo exhibited inmates sunbathing on the grounds. Fearful that their seemingly cheerful presence was a violation of the truth, the photographer edited them out. If he had allowed the original picture to speak for itself, he could have let the viewer do the parsing. Were the sun worshipping captives truly innocent of what was happening or were they self-deluding or, most credibly, had they simply become inured, indifferent, to the horrors? The ambiguity is far more powerful than the obvious.

Cognet employs his own camera with mixed results. Intermittently he superimposes enlarged negatives showcasing various concentration camp scenes onto the site’s current incarnation where tourists mill about as birds chirp. The past and present are visible simultaneously and the juxtaposition is unnerving, but there is also an element of the absurd. In one snippet the blown-up negatives have been secured on a row of tripods and at first glance it appears as if the tripods are gliding along, not unlike creatures out of science fiction.

By far the most troubling pictures Cognet captures are the vacationers on the camp grounds today — smiling, gesturing, hamming it up as they snap selfies, then asking others to photograph them with the barracks as backdrop.

The opening and closing scenes pack a particularly emotional wallop. The film starts with a rainfall that builds in momentum. A torrent of water streams onto a pond, evoking nature at its most refreshing and redemptive. In the following scene, the landscape has now dried and one of the scholars is rummaging through the dirt, sifting through white fragments resembling stones held between his fingers. He tells Cognet that he’s clutching bone particles belonging to concentration camp inmates who did not make it out alive. The rain always brings the remnants to the surface, he says. The film concludes with another rainstorm gushing onto a body of water, and so what? What happened here cannot be cleansed away.

This is not a fun film, but it screams out to be watched; it’s a picture, literal and metaphorical, of what happened told by those to whom it happened, a visual howl from beyond the grave.

The post Using previously unknown photographs, a new Holocaust documentary demands to be seen appeared first on The Forward.