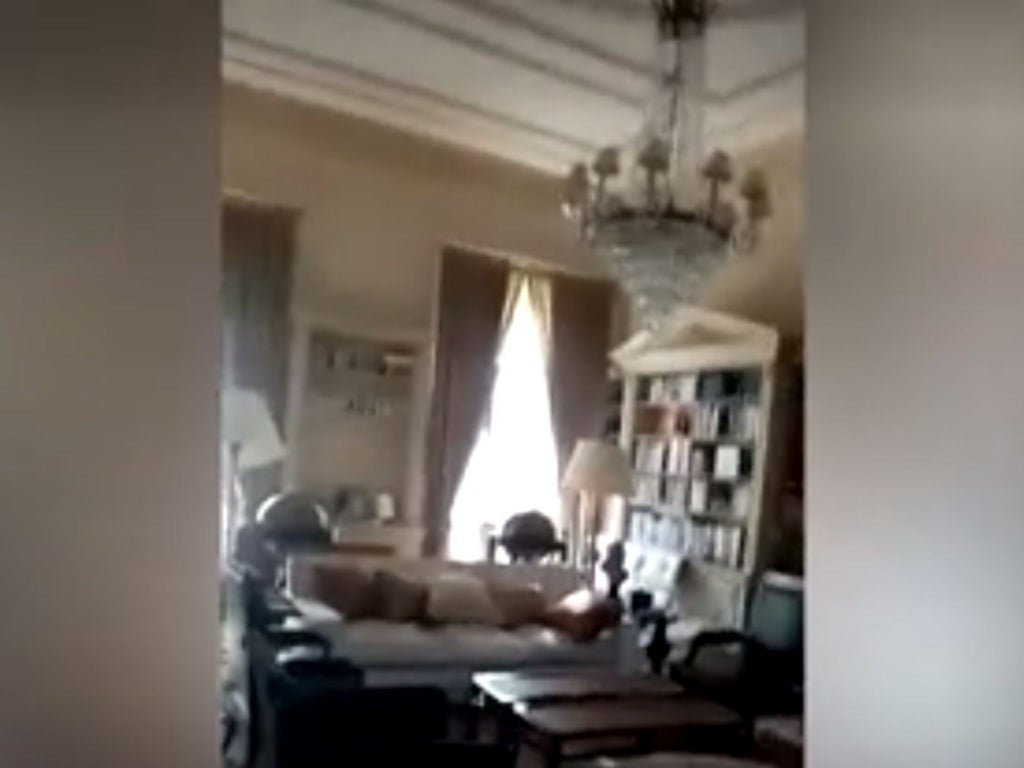 Squatters have posted a video tour of a Russian oligarch’s mansion in London, which they say should be used to house refugees fleeing Russia’s invasion of Ukraine.

The anarchist group entered the luxury townhouse in Belgravia – reported to belong to billionaire Oleg Deripaska – in the early hours of Monday morning.

The clip shows the classically-decorated home with chandeliers hanging from high ceilings, long corridors and staircases, mezzanine floors, and multiple living rooms and studies lined with bookcases and huge mirrors.

The townhouse, thought to be valued at around £50m, also features a grand piano, cinema area, a marble bust in the hallway, and many plush cream-coloured sofas – but barely any signs of being lived in.

After occupying the property, in Belgrave Square, the group hung a banner that read “this property has been liberated” over a balcony that faces the street.

They also displayed a Ukraine flag and another banner with the words: “Putin go f*** yourself”.

The activists occupied the building in protest against Vladimir Putin’s ongoing invasion of Ukraine.

The squatters called themselves the London Makhnovists, after Nestor Makhno, who led an anarchist movement that attempted to form a stateless society in Ukraine during the Russian Revolution of 1917-1923.

In a statement, the group said: “By occupying this mansion, we want to show solidarity with the people of Ukraine, but also the people of Russia who never agreed to this madness.”

Eight people – the four inside the building, and four more that were outside – were arrested on Monday evening following a standoff with police lasting about seven hours.

Riot police – who had been waiting for hours in several vans parked outside – bust open the door at around noon.

The activists had sat on the balcony and refused to leave, while police stood on the platform of a JCB cherry picker to talk to them.

The demonstrators reportedly mocked the police’s efforts by sipping whisky and iced tea, and singing ‘The Time of My Life’ from the film Dirty Dancing.

Mayor of London Sadiq Khan has questioned the proportion of the police’s response to the squatting incident.

Speaking to LBC’s Tonight With Andrew Marr programme, Mr Khan said: “I’m unclear what the police were responding to because we know no one’s living there.

“But I’m not sure if there were concerns about any crimes being done to any neighbouring properties, so those are the questions.”

When asked if he would raise the incident to Metropolitan Police commissioner Dame Cressida Dick, he said: “Or the number two, but someone in the police service – yes.”

Mr Khan has also voiced concerns about the length of time the government is taking to seize property in London owned by Russian oligarchs with strong ties to Putin.

He said: “We know that there are many properties owned in London by people close to Putin.

“One of my concerns is, we’ve had a number of weeks now to seize those homes, to allow them to be used by refugees. They haven’t.

“I don’t condone the actions of the squatters but they’ve decided to take the law into their own hands.”

Commentators on Russian “dirty money” have nicknamed he capital as the “London laundromat” – as its property market has allowed billions of pounds from Russia’s economy to be used unchecked to buy huge assets in the UK.

About £1.5bn of UK property has been bought by Russians who have been accused of having links to the Kremlin, anti-corruption campaign group Transparency International has found.

More than two thirds of that amount is held in property owned through shell companies, based in tax havens, that obscure an owner’s identity.

After the occupation of 5 Belgrave Square, the government said it is “looking at” the possibility of legislation that would allow the UK homes of sanctioned Russian oligarchs to be used to house Ukrainian refugees.

Mr Deripaska was one of seven oligarchs sanctioned by the UK government earlier this month over their alleged close links to the Kremlin. He has been under US sanctions since 2018.

Mr Deripaska, who reportedly owns 5 Belgrave Square, has insisted that he is not the beneficial owner of the property.

The title register lists the proprietor as Ravellot Limited, a company registered in the British Virgin Islands, the Financial Times reported.

Mr Deripaska’s name doesn’t appear on the title, but his spokeswoman said his family owns the house.

But a 2006 judgment in the High Court in London involving Deripaska had revealed he was the beneficial owner of the house.