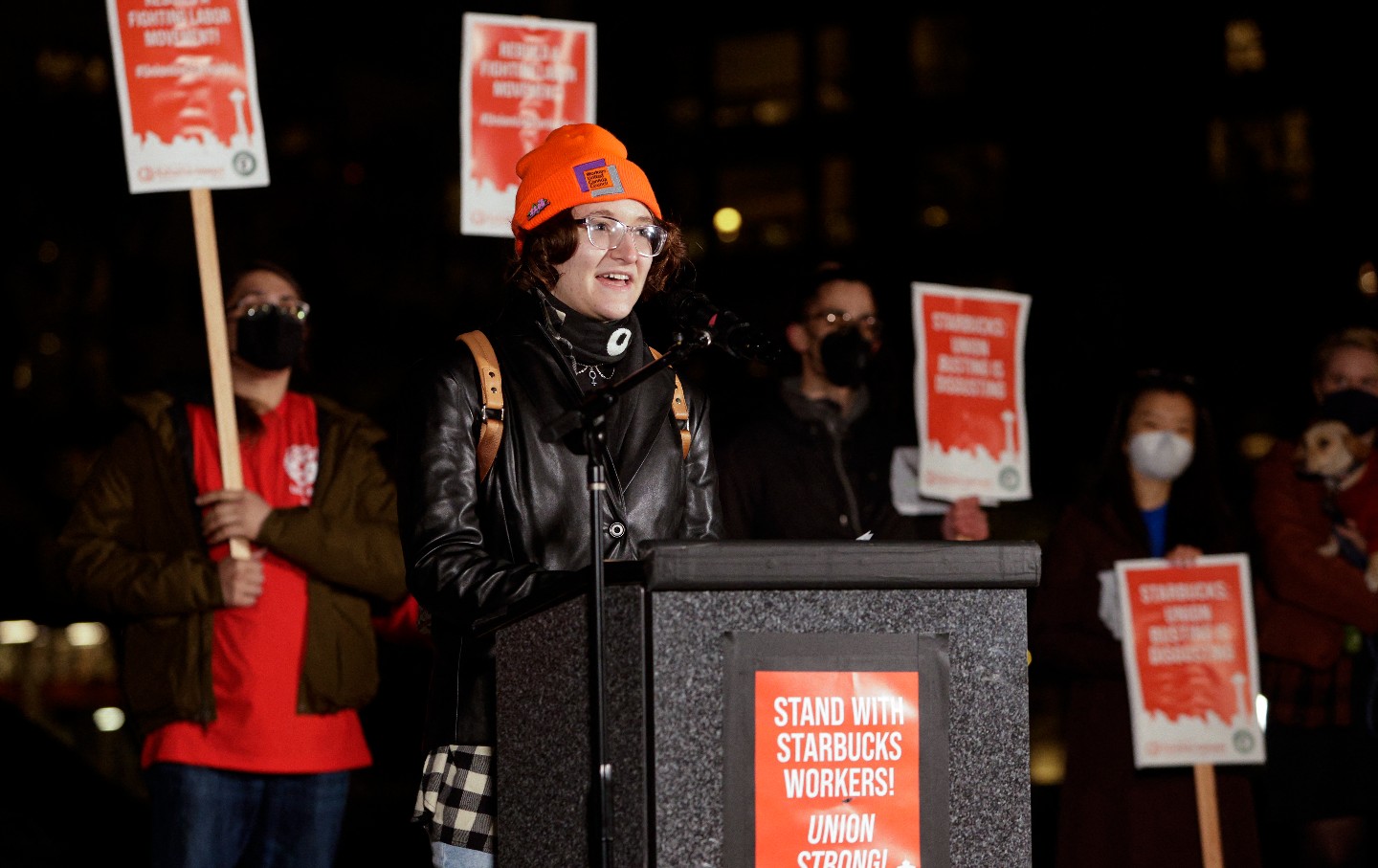 Did you know you can support The Nation by drinking wine?

When the Industrial Workers of the World (IWW, whose members are often dubbed “Wobblies”) launched a campaign to unionize Starbucks baristas in 2004, the idea was so quixotic it seemed more like performance art designed to comment on the labor movement itself than an earnest attempt to organize shops. Unionizing Starbucks baristas was like unionizing the Death Star stormtroopers: both impossible and pointless. Now, as I write in the spring of 2022, workers at over 100 locations nationwide have petitioned for recognition and the Starbucks Workers United campaign is the labor story of this young year. What changed?

Twenty years ago, when the coffee chain entered a period of meteoric expansion, “Starbucks” and “union” were such antithetical concepts that to combine them was to suggest more questions than answers. In the 1990s, it had been standard practice for anarchist protesters to break any Starbucks windows they happened upon as symbols of yuppie consumerism, corporate chain consolidation, and the exploitation of the Global South. With their anarcho-syndicalist heritage, IWW Wobblies were supposed to be smashing Starbucks glass with their bike locks, not inside taking orders. But after the defeat of the Global Justice Movement, it became clear that not only were big chains like Starbucks going to keep growing but more and more jobs were going to look like Starbucks jobs. The labor movement needed a path forward, and the IWW was uniquely positioned to blaze one.

Organizers for mainstream trade unions like the American Federation of Labor have historically been loath to wrangle low-wage workers in industries where employers hold highly concentrated power. The organizing is harder; the workers have less to offer in dues; the law accords them fewer rights; and the bosses can always fire staffers and hire new ones without worrying too much about training costs. It’s not an appealing place to invest resources, which has left the job to radicals like the IWW. The Wobblies formed an unusual union, one based in the fundamental fellowship of all workers rather than the narrow advantages of certain craftsmen. The IWW asked workers to join the “one big union,” even if they were not citizens, “skilled,” English-speaking, white, or male. Any worker can join, even dues-paying members of other unions.

Starting in the early 1900s, the IWW enlisted tens of thousands of members regardless of their work, from dockers and lumbermen to bird-cage makers and telephone switchboard operators. The Wobblies specialized in unauthorized “wildcat” strikes and even used sabotage to offset the owners’ advantages. The University of Washington’s IWW History Project documents over 400 labor actions led by the IWW between its founding in 1905 and 1920, at which point the authorities used extralegal violence and “criminal syndicalism” laws to quash these efforts; today, we know this period as the first Red Scare. Conventional wisdom holds that IWW lay comparatively dormant for decades, as its membership dwindled.

Fast-forward to 2004, when Starbucks baristas had no hope of winning a vote to unionize—the company had too many cards to play and too many expensive lawyers to play them. Meanwhile, unions built on high-wage manufacturing were focused on saving those jobs, not organizing coffee shops. Enter the Wobblies, whose organizing had slowed but never stopped. They seized the opening, quickly switching from a focus on individual shop votes to a national campaign that threatened the company’s most valuable asset: not any particular operation, but the brand itself. It was a strategy made for tough times, when workers walking out or even dynamiting a store wouldn’t matter much to the chain’s bottom line. Attacking the brand was sabotage for the 21st century.

The IWW kept at its Starbucks campaign for 10 years, despite the challenges and without help from the mainstream organized labor movement. During that time, the US job quality index collapsed, indicating an economy-wide shift toward precarious, low-wage work. The private sector unionization rate slid under 10 percent, then down closer to 5. The trade unions’ playbook was ill-suited to this diffuse labor landscape, and they bargained from their collective back foot. The new front was right where the IWW wildcats were already scrapping. In December 2021, Starbucks employees in two of the three elections at Buffalo, N.Y., locations voted to join a Service Employees International Union (SEIU) affiliate called Starbucks Workers United.

These victories for retail chain unionism offer a small ray of hope for the embattled US labor movement. The Starbucks unionization march is outpacing corporate’s response, and workers at the outdoor gear retailer REI’s flagship store in SoHo voted to unionize 88 to 14 in March of this year, setting a precedent—brands like Starbucks and REI, which position themselves to consumers as progressive, are particularly vulnerable to intellectual property sabotage. The IWW’s tactics continue to pay off: In February of this year, workers at the Alamo Drafthouse’s flagship location in Austin, Tex., submitted a request for recognition of Drafthouse United, with a proposed IWW affiliation.

Getting recognition is a big hurdle, but it’s only the first. Negotiating an initial contract can take years, and many campaigns burn out at this stage. This is why it behooves unionists to have some radicals involved. In November of 2021, the Pacific Northwest fast food chain Burgerville ratified a contract with the workers at five locations represented by the Burgerville Workers Union 51 bargaining sessions and three and a half years after the IWW organized the first shop. Theirs is America’s only fast-food union contract. So far.

They may have been marginal, at best, 10 years ago, but Wobbly ideas are increasingly influential. As The New York Times reported, workers at Google and other Silicon Valley companies have picked up strategies and tactics from a book called Labor Law for the Rank & Filer, cowritten by Daniel Gross, the former Wobbly who launched the 2004 Starbucks campaign. Tech workers command bigger salaries, but relative to their bosses they’re about as outmatched. Like fast food, tech doesn’t do unions. That calls for a union with a healthy disrespect for the way things are done.

I don’t know whether Starbucks Workers United will get a contract, or if we’ll ever see a McDonald’s Workers United; the model of American low-wage work seems to rely on workers remaining disempowered, and I expect Starbucks to go through considerable lengths to avoid agreeing to a contract. But a weaker labor movement also means a Wobblier one, and that opens a whole new set of possibilities for organizing and action.

The Willmar 8
Lee Grant’s 50-minute documentary tells the story of eight women in Willmar, Minn., who walked out in 1977 in what became the country’s longest bank strike. Now playing on Mubi.

Generations, by Lucille Clifton
Buffalo, N.Y., is the site of the first unionized Starbucks and the hometown of poet Lucille Clifton, whose beautiful short memoir of her family’s journey out of slavery into the Buffalo working class was reissued in November by NYRB Classic.

Bisbee ’17
This staggering 2018 documentary by Robert Greene records the centennial reenactment of an attack on IWW miners in Bisbee, Ariz., now playing on Kanopy and Mubi.