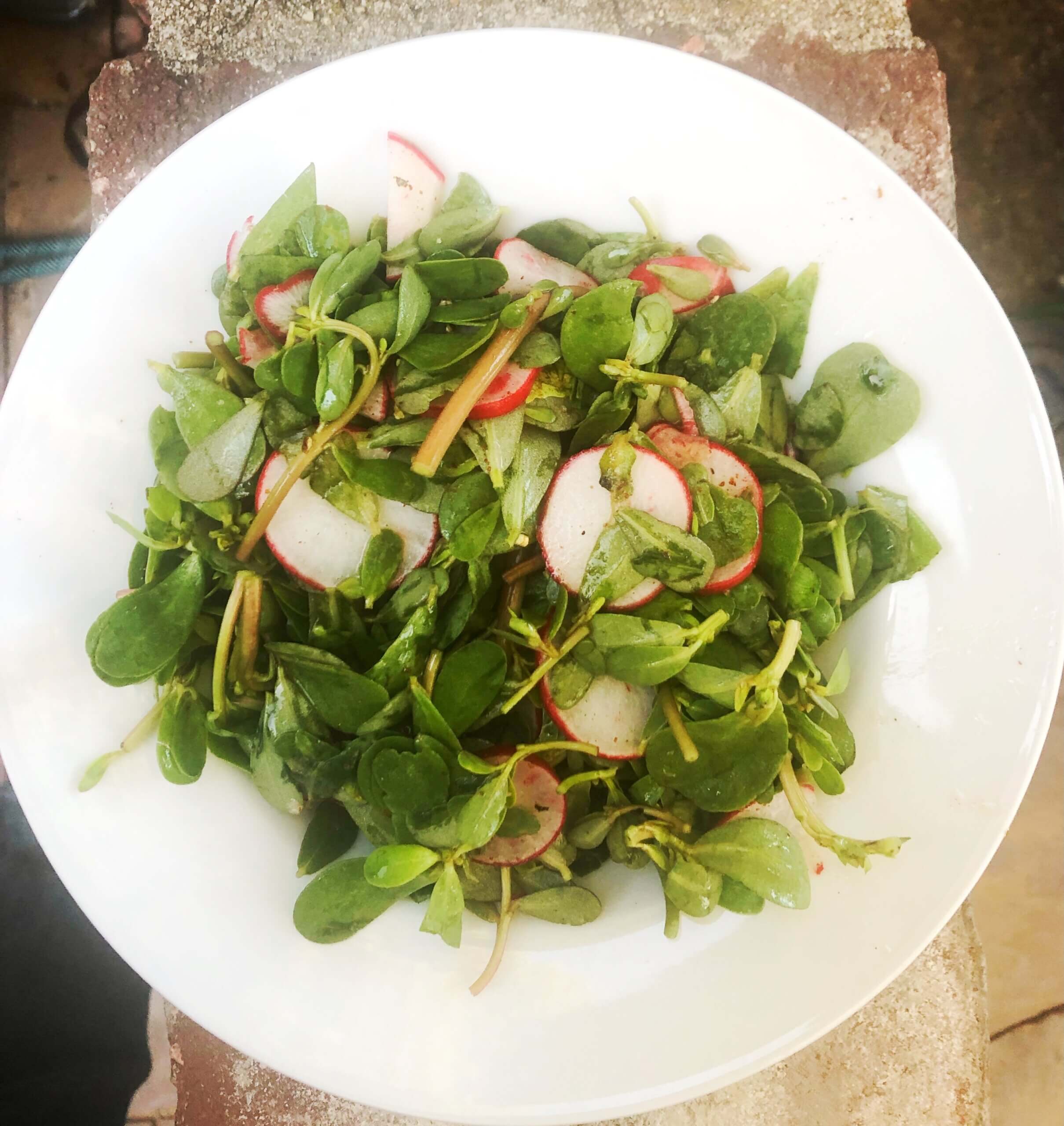 When a Jew cooks Palestinian food

My first Palestinian cookbook was “Palestine on a Plate” by Joudie Kalla, and it struck me as revolutionary. For years Israeli Jewish cooks and businesses had popularized many of the foods Kalla was writing about — first, hummus, of course, then za’atar, date syrup, pomegranate seeds and sumac.

Sometimes the chefs made sure to mention that these ingredients had long been in use in Palestinian kitchens.

“I don’t think there’s enough understanding how deeply rooted Israeli food, as it’s cooked at the moment and seen all over the world, is actually based on Palestinian cooking,” the chef Yotam Ottolenghi, whose business partner is Palestinian chef Sami Tamimi, once told me.

Mostly, though, that fact went unspoken, the attributions fell by the wayside, and ingredients that have long defined Palestinian cooking entered the marketplace under a different identity.

When Yelp lists “The 10 Best Israeli Restaurants in Los Angeles,” it includes no asterisk to remind people that most of the dishes on the menus are Palestinian as well. The first dish listed on the menu of the Bavel, perhaps L.A.’s most acclaimed Israeli restaurant, is the $13 “Hummus Masabacha,” a classic Palestinian preparation whose origins are right there in the name masabacha, the Arabic word for “swimming.”

And L.A.’s three Mizlala restaurants use the tagline, “From Tel Aviv to L.A.” even if the hummus and falafel the restaurant has perfected originated long before Tel Aviv was created.

Kalla’s book, by simply putting forth her recipes, staked a rightful Palestinian claim to these and other dishes. Their origins may have been elsewhere, and their exact inventors are long lost to history, but they are also part of the land where her family and other Palestinians have lived for generations, linked to their traditions and religions.

Without any overt political content, the book made a powerful statement about the richness and depth of Palestinian culture.

Plus, the recipes looked delicious.

So, beginning in 2018, I started cooking dish after dish, first from “Palestine on a Plate,” then from Kalla’s newer book, “Baladi,” then from the small shelf of Palestinian cookbooks that followed: Reem Kassis’ “The Palestinian Table” and “Arabesque,” Tamimi’s “Falestin” and Yasmin Khan’s “Zaitoun.”

I had eaten in many Palestinian restaurants and homes over the years, but the books opened up a far richer, deeper food culture than I had ever experienced.

The dishes easily worked their way first into my regular Shabbat meal repertoire. The usual roast chicken gave way to musakhan — a complex, layered centerpiece of chicken or eggplant baked on a bed of melted, sumac-scented onions resting on flatbread.

Then I went a bit Palestinian on other Jewish holidays, making ma’amuol, fig-stuffed semolina cookies into a traditional three-cornered shape for Purim.

Then I incorporated Palestinian staples into my everyday cooking. I made jars of shatta, a cilantro and green chili salsa, and nine-spice mix, a standard seasoning blend. Jerusalem’s Old City shuq, I realized, smells like nine-spice mix, and so did our kitchen.

One thing I learned was that as much as Israeli chefs had popularized many of these foods, they didn’t begin to reveal the depth and variety of a cuisine that, like Jewish food, drew from Ottoman, North African, European, Persian and of course local sources.

Sure, you can now buy “Za’atar Seasoning Blend” at Trader Joe’s, complete with lettering in a carefully ecumenical Semitic font, but what about purslane? Who’s cooking whole cakes with nigella and fenugreek seeds? And those Gazan stuffed carrots?

I posted my efforts in short Instagram videos I titled, ”A Jew Cooks Palestinian.”

The title was factual and judging by comments I received on social media, provocative. The posts turned into a culinary Rorschach test for people’s preconceived opinions on the Middle East conflict.

There were Jews who seemed to think I was trying to push a Palestinian narrative on unsuspecting Jews.

“It’s called Arabic food,” one viewer commented. “‘Palestinian’ was made up by British and doesn’t describe the cuisine historically accurately.”

And there were Palestinians who were certain I was focused on food to distract from what one commenter kept calling “Zionist crimes.”

But then, one day, there was this comment, which popped up in my post on Joudie Kalla’s stuffed eggplant:

Kalla, whom I had never met or corresponded with, made me feel I was on the right track, helping get the word out about the simple delights of a cuisine in a complicated part of the world.

But: When I sat down last month to write about my Palestinian cooking, another round of conflict broke out between Israelis and Palestinians. The headlines that are already so familiar repeated themselves: At least 15 Palestinian children dead, most at the hands of Israel. Israelis running to shelters in fear, sirens in Tel Aviv, more destruction of Gaza.

“Thankfully, this escalation ended before turning into an all-out war,” wrote Gaza journalist Muhammad Shehada when it was over, “but as Israelis emerged from shelters to resume normal life, Gazans went back into their every day abyss of non-life: darkness, misery, poverty and confinement.”

Writing about recipes as images of dead Palestinian children and frightened Israelis fill the news seemed off point, if not callous. That’s exactly why, every time in the past I sat down to write about cooking from Palestinian cookbooks, I put the project aside. The conflict would re-erupt, and it would push my little Instablog project from my thoughts.

I didn’t want the serious and painstaking efforts of these Palestinian cookbook authors to be seen as a Jew za’atar-washing his guilt or, worse, pretending our common foods are enough to bridge our grievances.

Writing about food at a time of war runs the risk of falling for the cliche that food brings people together, a lazy, naive and demonstrably false cliche. Few countries have more foods in common than Ukraine and Russia— borscht, stuffed cabbage, kvass —  but that hasn’t stopped Russians from attacking, killing and looting their neighbors.

You probably love barbecue as much as your Trump-loving or Trump-hating fellow American, but I’m sure if you both shared a rack of ribs, once you were done talking about Carolina versus Texas style sauce, the political hatefest would begin. It would probably start over the sauce.

It’s true food can bring us to the table with people we otherwise might despise. But it can’t make us understand or accept our enemies, much less love them, no matter how much we both like to eat. And it clearly won’t stop us from taking their land and killing their children if we come to believe that somehow that’s the right thing to do. It’s not magic, it’s just lunch.

What finally enabled me to write about cooking Palestinian food was a conversation I stumbled upon, online, between the Israeli-born chef Michael Solomonov and the Palestinian chef Reem Kassis, both of whose books I had often learned and cooked from.

At the urging of her publisher, Kassis had reached out to Solomonov to get a blurb for her first book.

“Why should I send it to an Israeli chef?” she said at first.

But Kassis “took a chance,” Solomonov told an online audience in 2020, “and she’s like my best friend.”

The friendship seems to work its way into their foods. I’ve made Solomonov’s grilled chicken thigh recipe that uses a Palestinian -inflected glaze of date syrup, sumac and harissa, and I’ve made Kassis’s Ashkenazic-influenced chicken schnitzel flavored with za’atar.

During their dialogue, someone asked Kassis what role food can play in bridging the Israeli-Palestinian divide.

“Whenever people ask Mike and me this question,” she said, “I say food is not the answer. Food is just a way to build connection with someone. I don’t think it was food that changed either my perspective or Mike’s. I think it was getting to know the other person. Food was a way to do it.”

Kassis not only supplied me with that Gazan stuffed carrot recipe, she gave me the words to explain why the recipe matters to me, why this Jew started cooking Palestinian in the first place.

“Whenever people ask, Is food the solution? I say, no, it’s not,” Kassis said. “Fix what’s on the ground, and the food can help us get to know each other and get along.”

The Israeli struggle for security, and the Palestinian struggle for justice, can’t be achieved over hummus. But they also can’t be won on the battlefield. One day, Palestinians and Israelis will decide to solve their problems by talking and compromising. That has to come first.

But after, wow, imagine the feast.

The post When a Jew cooks Palestinian food appeared first on The Forward.