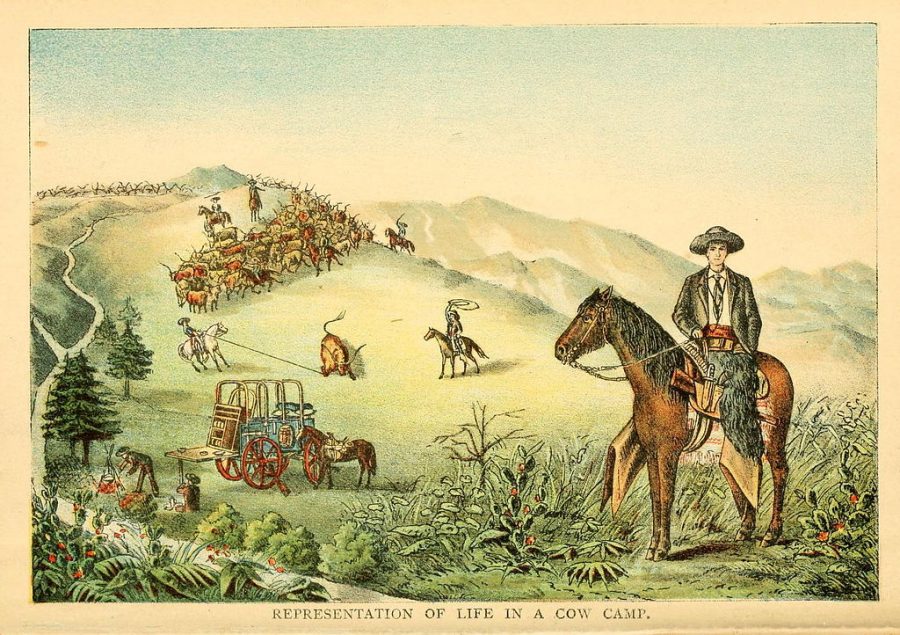 Cattle barons carved up Texas with barbed wire in the late 19th century, separating poor farmers and landless cowboys from vital resources for their struggling cattle herds. So the cowboys formed fence-cutting gangs to preserve the open range.

Native Americans called barbed wire the “devil’s rope.” Poor farmers and cowboys called it the “devil’s hatband.” They all recognized it as a tool of dispossession.

The wire was meant to protect the grazing land of wealthy ranchers. As their cattle herds flourished, others collapsed. In the cattle industry, a two-tiered system was developing: landed cattle barons enjoyed protected access to the best water sources and grazing land, while poor farmers and often-landless cowboys struggled to navigate the newly partitioned terrain. Herds cut off from water by the new fencing died of dehydration. The earliest forms of barbed wire had brutally sharp barbs, and in bad conditions cattle could get snagged on wire and die by the thousands.

Poor farmers and cowboys had long relied on the “open range,” the idea that the land belonged to all. When barbed wire closed that open range, they fought back.

Enclosure and the End of the Open Range

After the American Civil War, European and Northern capital flooded into Texas, causing rampant speculation on land and railroads. Outside capitalists and corporations, along with a handful of local planters and big ranch families, accumulated large tracts across the state. While economic conditions were dire for freed African Americans, poor whites, and many Tejanos (Mexican-descended Texans), a powerful new class was rising in Texas.

Between 1880 and 1883 alone, the price of cattle per head soared from $7 to $25. As the price of land skyrocketed too, the wealthy landed classes sought to protect their lucrative investments. To keep poor farmers and unlanded cowboys from tapping into their resources, they turned to a new technology: barbed wire.

Cattle barons put up barbed wire in a frenzy. They cordoned off the best water sources and did not hesitate to fence over public land and roads. Adding to the outrage of poor farmers and cowboys, the cattle barons often continued to use public grazing land until the grasses were depleted, after which they would retreat to their enclosures.

The enclosure of the land was driving the open range toward extinction. Small farmers, cowboys, and a few of the more established Texan cattlemen were furious at the encroachment by foreign capitalists and corporations, and believed the Texas Legislature would be quick to act to defend the open range. But time marched on, and no intervention came.

Beleaguered cowboys first started cutting fences out of a need to access roads and water, or move cattle to market. But as the fencing continued to proliferate and the cattle barons became more brazen, fence cutting took on a vigilante character.

Poor farmers and cowboys organized themselves into fence-cutting gangs, with colorful names like the Owls, the Javelinas, the Blue Devils, and the Knights of the Knippers. Under the cover of night, they set to work cutting down fences. They did not stop at fences that enclosed public land — the fence cutters aimed to rid the state entirely of the devil’s rope. As fence cutting became more common, cattle barons hired armed thugs to shoot at the fence cutters, and the fence cutters armed themselves in response. Thus began the Texas Fence Cutting Wars.

Fence cutting was simultaneously an act of survival and an act of protest. Near Waco, a rancher who had enclosed a water tank had his fences cut and grazing land burned. The fence cutters left a note:

You are ordered not to fence in the Jones tank, as it is a public tank and is the only water there for stock on this range. Until people can have time to build tanks and catch water, this should not be fenced. No good man will undertake to watch this fence, for the Owls will catch him. There is no more grass on this range than the stock can eat this year.

The fence-cutting movement was wildly popular with poor and working-class Texans. The Texas Greenback Party, a precursor to the populist People’s Party, encouraged fence cutting, framing it as a fight against monopoly power and warning that the fencing was an attempt to “convert farmers and small stockmen into serfs.” This prediction would turn out to be largely correct, not only in Texas but across the Southwest. The transformation of small farmers into tenant farmers would fuel the great populist agrarian movement to come.

Texas was engulfed in class conflict. Fence-cutting gangs popped up across the state, and over half the counties in Texas saw some form of the practice. Newspapers either supported or decried the act, but all recognized it as a populist movement against the enclosure of the land. As the Galveston Daily News wrote:

Fence-cutting never would have become so great and destructive if it had not met with such popular sentiment. . . . It found its way into the fireside of every home, and the grievances of the lawless element of the communistic fence-cutters was held up in glowing colours.

Though the fence cutters themselves were well-organized in the practical sense, the political side of the movement was not. Their lack of representatives allowed newspapermen and politicians to project their beliefs onto the fence cutters. For example, this note posted in Coleman County merged the fight against monopoly power with racial hatred and resentment of the progressive policies of Reconstruction, a conflation for which there is otherwise no evidence:

Down with monopolies, they can’t exist in Texas and especially in Coleman County; away with your foreign capitalists; the range and soil of Texas belong to the heroes of the South; no monopolies and don’t tax us to school the n*****; Give us homes as God intended, and not gates to churches and towns and schools and above all give us water for our stock.

Eventually, a good number of the fence cutters would be recruited into the growing Texas socialist movement of the late nineteenth and early twentieth centuries, which sought to merge the demands of rural dispossessed farmers with those of the industrial proletariat. But this work only began in earnest once the fence cutters had been thoroughly crushed.

“These Hell Hounds of Texas”

The Texas Fence Cutting Wars caused estimated losses upward of $20 million. Eventually, the cries of the landed elite in Texas were answered by the state: in 1884, a special session of the Texas Legislature was called to deal with the crisis. The debate was heated, with one legislator calling the fence cutters “the rag-tag and bob-tail ruffians, these hell hounds of Texas.”

There was little doubt that fence cutting would be criminalized, but what was to be done about ranchers who were fencing over public roads and lands? Here the Texas Legislature stood with the rich, making fence cutting a felony punishable by two to five years in prison, while for the cattle barons who encroached on public land, the punishment was a misdemeanor and a small fine of $10 to $100.

While the new laws lowered the temperature, they did not end fence cutting in Texas. That would take enforcement by the Texas Rangers, who seemed to take perverse pleasure in hunting the fence cutters. In one telling example, two Texas Rangers, Ira Aten and Jim King, embedded themselves with poor farmers in Navarro County, working with them during the day. At night, King would entertain them with his fiddle, while Aten purchased dynamite and set out to make bombs to place around fences in the area — essentially making fence cutting punishable by death.

When his superiors in Austin heard of his plans, Aten was ordered to return immediately, but the damage was done: the fear of death slowed fence cutting in the area for a while. While fence cutting did not completely go away, and would return particularly during periods of drought, increased enforcement by the Texas Rangers and the sheer scale of enclosure in Texas meant it would never rise again to its 1880s peak.

The fence cutters lost, but their devastation and the problems that came out of the enclosure remained. The veterans of the Fence Cutting Wars were eventually won over by another form of direct action: politics. The Farmers’ Alliance, the People’s Party, and the Texas Socialist Party would count many fence cutters among their ranks.

Texas has a rich history of working-class politics, from the fence cutters to the abolitionist German communes of Central Texas. Through all the dark chapters in Texas’s history, there were brave people who sacrificed to build a more just world. We should remember them as we make our own history today.