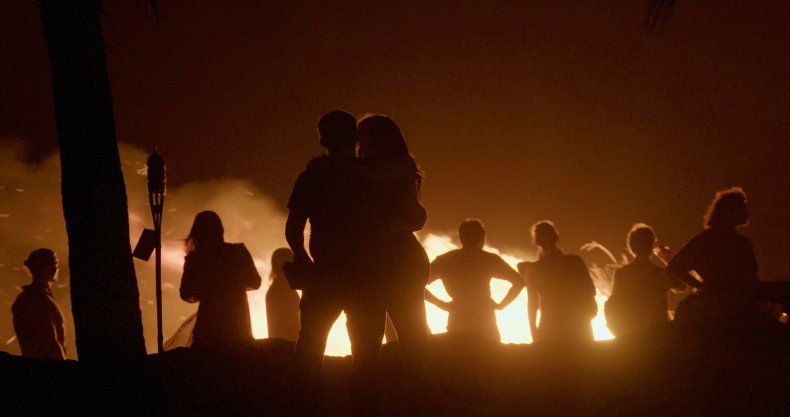 Where Is ‘The Anarchists’ Star Jason Henza Today?

“My mind got really really clear when I was injured,” Jason Henza, who appears in the six-part HBO docuseries The Anarchists, told Newsweek on August 24. “I was able to think far ahead and know the exact steps I wanted to take.”

He’s talking about being ambushed by gunfire in 2019 at the Acapulco, Mexico, home his friend, John Galton, shared with his girlfriend, Lily Forester. Henza was shot three times and Galton was killed.

“I lost my right arm for about six months,” Henza says. “It wasn’t fully working. These two fingers are still numb. I still have a bullet up in my nerve cluster in my shoulder. It cut through my pectoral muscle and went upward.”

When I ask how he’s doing emotionally, he says, “I was pretty angry at myself for allowing myself to let my life fall apart the way it was. I was blowing off police checkpoints, going on police chases, and just kind of just generally reckless behavior, so the shooting overall I would have to say kind of…it was tragic to lose John and that was really hard, but overall as far as emotionally being shot, it doesn’t affect me as much as you think it would.”

When I push him on this—how could getting shot not be traumatic?—he says, “I like violence. I watch football on Sundays. To come through on the other side of that makes me happy. I like action-adventure movies. It’s just my personality type; that’s why it’s so easy for me to get over it.”

The centerpiece of The Anarchists is Acapulco, which became a haven for the liberty set thanks to the presence of Anarchapulco, a conference for libertarian anti-state idealists founded by Canadian Jeff Berwick in 2015 that eventually grew into a sort of Coachella for crytobros. John and Lily (real names Shane Cress and Miranda Webb), whose connection to the conference was tangential, were also fugitives, hiding out in Mexico thanks to looming drug charges in the U.S. (Many people featured in the doc go by aliases somehow related to John Galt, of Ayn Rand’s objectivist tome Atlas Shrugged, which has come to be something of a sacred libertarian text.)

When the shooting happened, according to the series, the wheels were already coming off Anarchapulco, and getting shot somehow gave Henza clarity.

“I felt like I was the only sane person in the room. Calm, collected, knew what I wanted to do, I was talking to people on the phone, trying to get Lily in a safe spot and then get everybody ready to go up there and get John’s body to get it cremated. Obviously we’re freedom people. We didn’t want to do anything according to law. We just wanted to go about our business and live with the failure that we created….My mind got really clear. I got really evolved in that moment. Most of the time my mind isn’t that clear.”

Of the documentary itself, Henza says, “I thought Todd and [sound mixer Kym Kylland] did a very fair job. They were really kind and nice to everybody. They showed that they cared about us all, they didn’t just move in and use us. They were with us for about six years. Unfortunately what you guys get to see is just a tiny pinhole of our lives, these small moments. There was so much more. It wasn’t so awful and tragic as the documentary was showing.”

There are just two things that bug Henza about the doc: that the audience didn’t get to see more of his beloved dog, Sammie, who died after filming, and the title of the series.

“I would love that everybody out there to know that we didn’t choose the name of the documentary. We all identify under the large umbrella of anarchist. We are not the political movement that has struggled over hundreds of years trying to create their ideal of a society and all that kind of stuff, and I feel kind of bad for all the people that have worked for that cause, and I admire them in a way because they’re extremely charitable people.”

For Henza, though, the lines are a bit more blurry.

“I wish that they didn’t have such hard lines when they were communicating with a person like me who just wants to learn. I don’t read at all. So normally when somebody throws a book at me, I just laugh them off because I don’t read. And they expect me to understand their values and I would prefer to live it in practice. So, overall, I just wish, I think that was the hardest one for me to deal with, all the anger over the name and to have everyone say these aren’t real anarchists. Because we definitely want to live voluntarily, we definitely want to avoid coercion, we don’t want that in our lives anymore.

“We don’t want the corruption that comes with the big system that’s currently going. We just kind of want to get out of its way and do our own thing. Some people want to challenge it just because they’re crusading, which I think is just foolish. Just start building. There’s no reason to crusade. There’s a lot of people who depend on the system; you can’t just pull it out from under them.”

That’s where Lily ends up at the end of the documentary, too: that freedom works for her but that she has friends who are “statist” and the two can coexist. Says Henza, “That’s how we get along in society, or on the outskirts of society. We don’t always participate in their welfare programs and their health care system. When I was shot I went to a private hospital instead. A lot of us don’t put anything into that system, so we shouldn’t get anything out. I don’t think it’s fair. It’s why I never asked for the COVID checks.

In our community, it’s relatively small. It’s a freedom community itself. I don’t want to go out and keep hammering on the word anarchist. It does mean “without ruler” and it does upset a lot of the anarcho-communists. I care about anarcho-communists a lot. I’m a vonuan voluntarist. I prefer voluntary interactions among people. no coercion. I want to learn what they have to offer. I never want to reject the communist side.”

In freedom circles, “vonuan” signifies “one who is impervious to coercion”; “voluntarism” is the idea of relying on voluntary action (in layman’s terms, the opposite would be “statist,” a more typical form of government that relies on centralized organizations and control over citizens).

Says Henza, “My whole premise is to subvert the state or coercions that may come after me. I just sidestep things I don’t want to do….That was one of John’s major objections [to Anarchapulco]. There was just like, People aren’t doing enough freedom. All they’re doing is talking about blockchain and a party and they want to change the world? I agreed with him: Let’s decentralize, let’s build a fork, let’s do something cool and wonderful and do something for the community.”

Today, Henza is happily living in Puerto Vallarta, Mexico, sleeping in a small apartment with a hammock for a bed. He and Lily are, he says, best friends who talk every day, and he’s even dating.