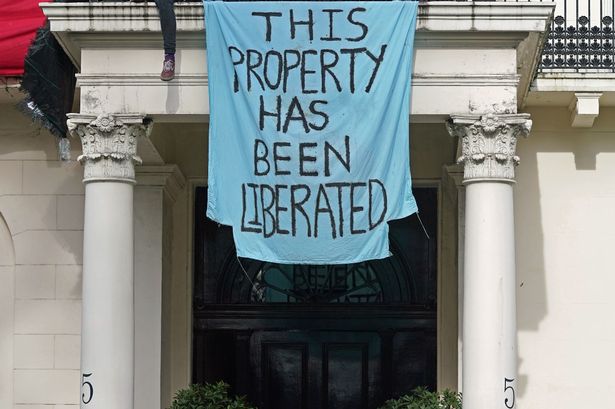 A group of squatters took over a mansion in central London linked to Russian oligarch and Putin ally Oleg Deripaska. Here’s what you need to know about the protesters who call themselves the London Makhnovists

Billionaire energy tycoon Oleg Deripaska is one of the oligarchs who have been sanctioned by the UK government after Russia’s brutal invasion of Ukraine.

Protestors in the UK took matters regarding Deripaska into their own hands on March 14, by gaining access to a London mansion linked to the billionaire.

The group who call themselves the London Makhnovists were seen on the balcony of 5 Belgrave Square in central London, saying they were reclaiming the property for Ukrainian refugees.

Here’s what you need to know about activist group and why they took over the building in Belgrave Square.

Who are the London Makhnovists?

Activists who took over the London mansion owned by Russian businessman Oleg Deripaska call themselves the London Makhnovists, named after Nestor Makhno, a Ukrainian anarchist who fought against the Russian White Army in 1918-21.

The group entered the Belgrave Square building just after midnight on March 14 and occupied the balcony, hanging Ukraine flags over the railing as well as banners that read “This property has been liberated”, as well as “Putin go f**k yourself.”

About their goals, the group stated: “By occupying this mansion, we want to show solidarity with the people of Ukraine, but also the people of Russia who never agreed to this madness.”

One of the protestors told journalists they were doing the British government’s work for them, aiming to reclaim the building for any refugees fleeing from their homes.

“We’re demanding this property belong to Ukrainian refugees. Their houses have been destroyed and this guy [Deripaska] supported the war.”

The squatters also called out UK elites who were complicit in Putin’s authoritarian attitude by adopting it, taking bribes or involving themselves with the oligarch’s assets.

They added that they had “made peace” with the possibility of arrest for their actions, with one of them saying: “I’m ready to take the consequences for something I believe.”

What happened during the protest at Belgrave Square?

After the protestors took over the building, at least 20 police vans were seen at the scene, with videos on social media showing riot police entering the building.

By 6pm GMT, a Met Police spokesperson said four arrests had been made for trespass, after the protestors had attempted to climb the back of the building, which is the Romanian Consulate.

Four people still remained on the balcony, despite police attempts to talk them down, with the spokesperson saying they would be monitored overnight.

However, by 8pm, the Met tweeted that the protest was over with eight people – four being apprehended outside the building – arrested, under section 9 of the Criminal Law Act 1977. All those arrested remain in custody.

Police searched the property and said they were satisfied there is no-one left inside, but officers were kept at the scene overnight to keep watch.

Later, the prime minister’s official spokesman spoke about the incident saying: “Squatting in residential buildings is illegal, but we are working to identify the appropriate use for seized properties while owners are subject to sanctions.”

Who is Oleg Deripaska?

Oleg Deripaska, pictured with Putin, has a multi-million property portfolio in the UK
(

Moscow-based business tycoon Oleg Deripaska is one of the oligarchs targeted by the UK government with sanctions due to the Russia-Ukraine conflict.

Mr Deripaska, who has an estimated net worth of £1.38 billion according to Forbes, has a multi-million-pound property portfolio in the UK, which includes the Belgrave Square mansion that protestors took over.

The founder of metals and hydropower company EN+ allegedly has a close relationship with the Kremlin, and has been under US sanctions since 2018.

Deripaska has said that the £25 million property belongs to his family and not him, but a 2006 High Court judgement ruled that the tycoon himself was the owner of the massive house located in one of London’s most expensive neighbourhoods.