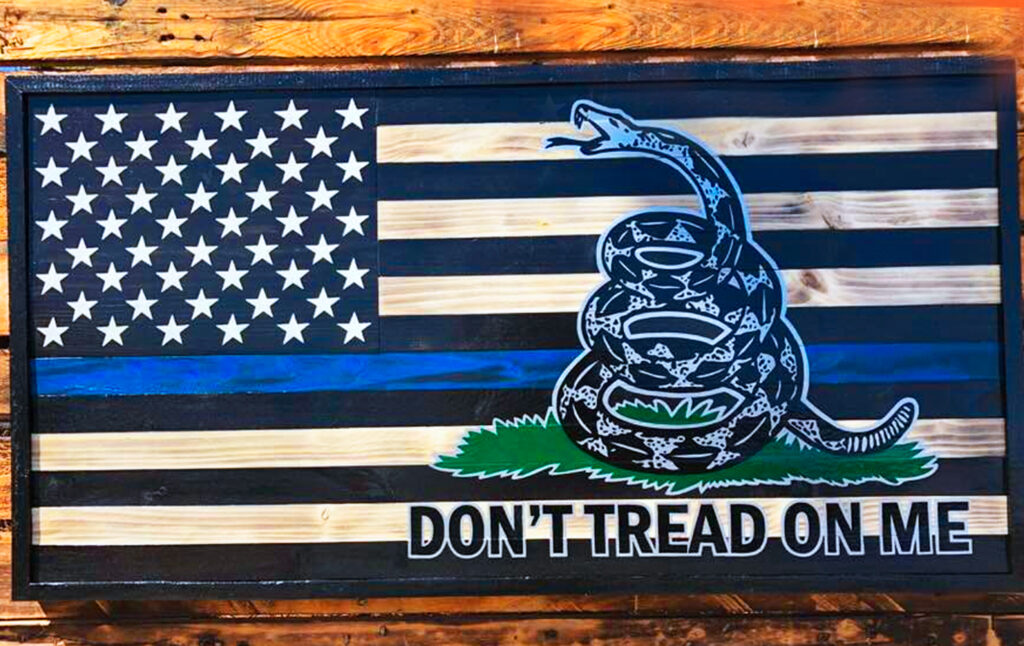 Why Conservatives Hate the Government But Love the Cops

[Content warning: photograph of the murder of George Floyd]

There is, as I am sure you know, a certain kind of conservative who likes to drive a colossal, pedestrian-mashing truck with as many flags as possible flying from it. If you have seen one of these trucks before, and you definitely have, you may have noticed that among the many flags are usually these two:

The one on the top left is the “thin blue line” flag, which is used to celebrate police officers and indicate an opposition to Black Lives Matter. The one on the bottom right is the much older Gadsden flag, today used primarily to indicate support for libertarianism and “small government.”

There is something rather amusing and ironic about seeing the two flags together: one of these flags is a defense of the state agents who put their boot on people’s necks, while the other is about not letting the state put its boot on your neck. Their messages seem diametrically opposed. The police are, after all, the arm of government empowered to use violence; there is no more coercive part of the state than the cops. Surely if the Gadsden rattlesnake is hissing at anyone, it is hissing at the police.

But the seeming contradiction is no contradiction at all, once we remember that the world is full of many different necks on which the state can put its boot. The Gadsden flag does not say “Don’t tread on ANYONE.” It says don’t tread on ME. Taken literally, it does not announce a general principle for how the government ought to treat people; it is a purely individual insistence that the bearer of the flag themselves should not be coerced. Christopher Gadsen, the designer of the flag, led the American patriot movement in South Carolina during the Revolution, and was a delegate to the Continental Congress. He also owned “a great number of slaves” and built a wharf through which 100,000 enslaved Africans were brought into America.

It is tempting to label Gadsden a hypocrite for designing a flag endorsing freedom from violent coercion while personally depriving others of their freedom through violent coercion. But Gadsden was not a hypocrite. He was just evil. His principle was that he and his fellow white property owners ought not be made to do anything they didn’t want to do. The flag says nothing about whether Black people ought or ought not be trodden on. Similarly, there is nothing peculiar about a “Blue Lives Matter” flag next to a “Don’t Tread on Me” flag. The combined message of the two is: please tread on someone else.

“Small government for me but not for thee” is the right’s implicit motto. Frank Wilhoit put this pithily when he said that conservatism consists of the single proposition that: “There must be in-groups whom the law protects but does not bind, alongside out-groups whom the law binds but does not protect.” Corey Robin argues in The Reactionary Mind that at the core of right-wing politics lies not a philosophical position on the correct size and role of government, but an attachment to traditional social hierarchies and an opposition to movements for equality.

Thus, conservatives are not really sincere when they say they believe in “small government.” What they mean is that they believe in small government when it comes to anything that could restrict them (conservatives generally but also members of the privileged in-group) from doing as they please. The lovers of liberty, however, want the government to be omnipresent and carry heavy weaponry in order to regulate all kinds of behaviors of other people.

Government can be huge, then, if it’s investigating the parents of trans children, waging war against some helpless population of rural peasants (see, e.g., the bombings of Vietnam, Cambodia, and Laos), demolishing homeless encampments, ensuring women do not empty the contents of their uterus without state permission, stopping anyone from straying across an invisible geographic line, demanding daily flag-worship, or making sure the wrong leaves don’t get smoked. But if the government were to provide public housing, pay single parents to raise their kids, or let poor people go to the doctor for free—all of which entail encroachments on the absolute property rights of the rich—suddenly there would be serious questions about the proper size of government.

All of which is to say, there is no conservative view on the correct size of government. A conservative’s conception of the size of government is that it be tailored to support the ultimate conservative principle of preserving hierarchies of property ownership, as well as traditional gender and racial hierarchies. So, for instance, it is not considered “big government” for the government to enforce the theft of land from Native Americans or enforce the rights of the descendants of enslavers to keep their illegitimately-accumulated booty. But to enforce the rights the other way, i.e., to provide reparations by giving Black Americans the inheritances they would have had if thievery hadn’t been lawful for hundreds of years, would be treated as an improper use of state power, an intrusion upon rights.

Notably, the U.S. left, who are frequently accused of both supporting anarchistic restrictions on police power and a huge, coercive state, have generally had a much better record than the right on curtailing the coercive powers of Big Government. It is leftists who have stood for civil liberties and questioned the use of excessive policing and incarceration as means of dealing with social problems, and have instead advocated a government that, if “big” in the sense of its economic largesse, is small in the amount it uses the police and the military.

There is nothing contradictory about a conservative opposing the government but loving the police, once we understand that the conservative correctly sees the police not as the agents of mass incarceration and murderers of average citizens in the streets (which is how those threatened with incarceration and police killings might see them) but as the protectors of property rights. I do not consider conservatives entirely “unprincipled,” then. It’s just that their principle is a little different from what they say it is. It is what Adam Smith called the “vile maxim of the masters of mankind”: “All for ourselves, and nothing for other people.” On this simple proposition, all of their flags are entirely consistent.