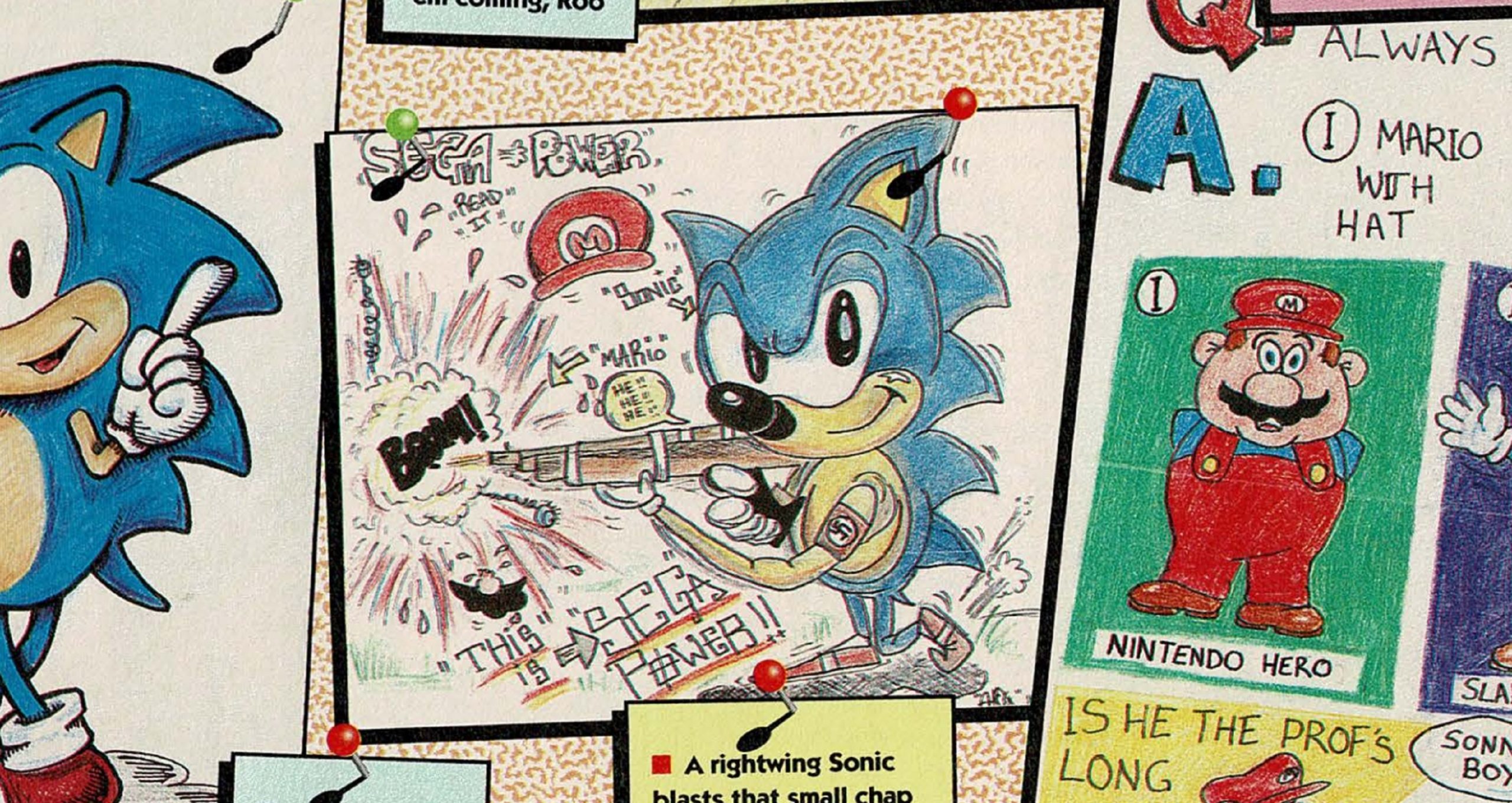 Why Did a Nazi Sonic Appear in a Sega Magazine?

Seeing an image of Sonic the Hedgehog as a Nazi wouldn’t even make me blink in the year 2022. I’ve been looking at the internet for too long to be shocked by fascist imagery or weird fan art of Sega’s beloved mascot. In a way, the marriage of the two is inevitable, a kind of Rule 34 without the sex, though you can find a sexy picture of Nazi Sonic as well if you looked.

Google Image Search “Nazi Sonic” and see the images yourself. There he is photoshopped on Hitler’s body, with his friend Tails, saluting the Nazi flag. One of these images is not like the rest, however. It’s from a moderately viral tweet from October 29, 2020, showing a lovingly hand drawn Sonic with a Swastika armband and a rifle, seemingly blowing up Mario, his rival mascot from Nintendo, to bits. Unlike the other internet detritus the Google search turns up, this one by contrast has a childish charm.

More interesting, however, is that the image was originally published in the June 1992 issue of Sega Power, a magazine devoted to the video game company, its games, and the fandom around it. How in the world, any reasonable reader today might ask, did a popular gaming magazine publish Nazi Sonic fan art?

To understand this image we must first understand its historical context. By 1992, the Cold War had ended and the Console War was heating up. It is the fourth generation or 16-bit era of consoles. The Super Nintendo Entertainment System (SNES) has been on the market for two years, and the Sega Genesis for a couple more. The Nintendo Entertainment System had completely dominated the previous generation and is widely considered to have pulled the video game industry out of 1983’s great video game crash.

In 1992, Nintendo’s position was less dominant. The Genesis launched at a lower price point and consistently outsold the SNES during the Christmas shopping season. The Genesis had a slick, black, edgier look, and the marketing to match. “Genesis does what Nintendon’t,” as the famous ad said.

Key to this edgieness was Sonic, who differentiated from Nintendo’s loveable goofball Mario by taking on a kind of rude teen attitude. If you let him idle for a bit in the game he’d break the fourth wall, look at the camera, and start tapping his foot, urging you to get on with it. Over the years, these mascots became the avatars of the console wars, which is why PlayStation launched with an ad of Crash Bandicoot in front of Nintendo headquarters calling Mario a “plumber boy.”

This intense rivalry and brand affiliation-as-gamer identity largely defined mainstream gaming culture when Sega Power published that June 1992 issue. Back then, magazines like Nintendo Power published fan art in their reader letters sections, and it’s no surprise then that the June 1992 issue of Sega Power includes a lot of anti-Nintendo drawings.

There’s a short comic where Shinobi cuts off Mario’s stomach with a sword to help him “lose some weight:” 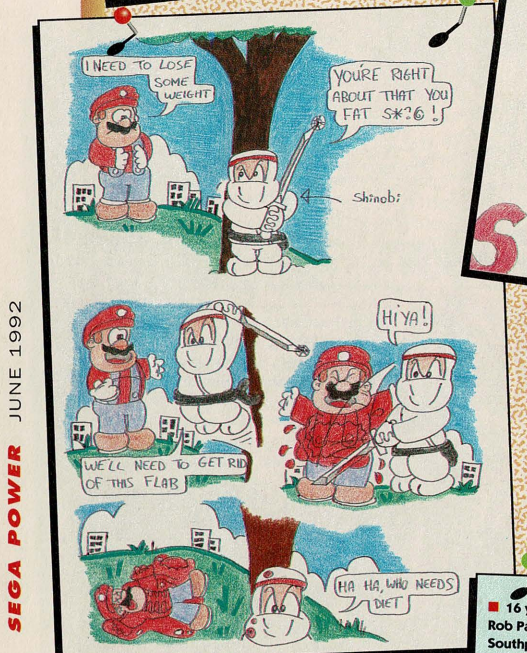 One of Sonic punching Mario’s face in: 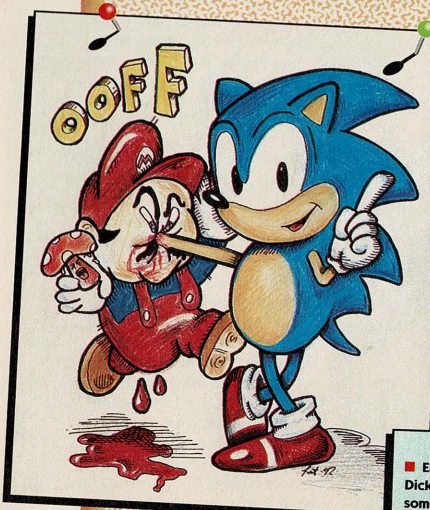 Another revealing that Mario is bald beneath his iconic hat: 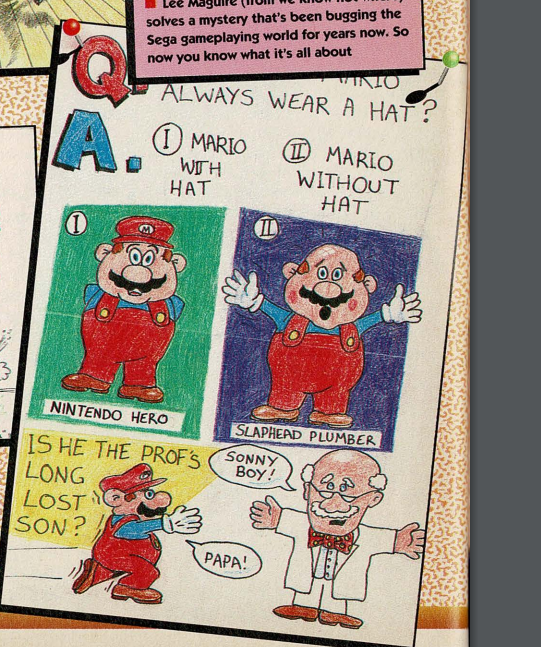 One particularly morbid fan art depicts Mario with a noose around his neck while Sonic shoots him with a pistol and Luigi is decapitated in the background by Alex Kidd: 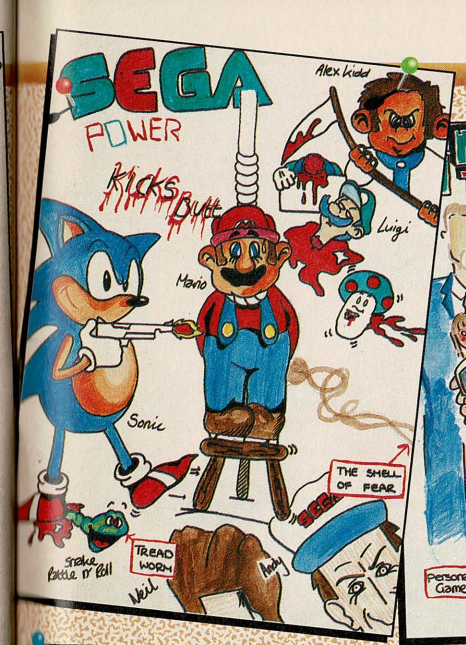 The image of Nazi Sonic is slightly less shocking when nestled among the images above, but it’s still pretty bad. A note from the editor alongside the image reads:

“A rightwing Sonic blasts that small chap who wears an M on his hat to kingdom come. The artist? None other than Alex Beardshaw from Sheffeld.”

Andy Smith, the editor of Sega Power at the time, told me that the issue was in fact published during the height of the Nintendo vs. Sega wars in the UK, and that the magazine published fan art as a way of connecting with readers. For some of those readers—kids, he assumed—seeing their art in the magazine meant the world to them.

“As to this particular image—the armband was not considered a big issue back in those days,” Smith said. “Perhaps we simply weren’t as ‘woke’ as we are now, but I think we were perhaps better at seeing things in context—the whole ‘idea’ of this particular sketch is to show Sonic (Sega) blowing away Mario (Nintendo) and that was about as far as it went.”

In Smith’s opinion, the Nazi armband was just a way to convey that Sonic was a ruthless force to be reckoned with.

“Maybe that’s my naivety, but I don’t think anyone—certainly not me as the editor at the time— thought it was so outrageous that it shouldn’t be printed. We also tagged the image as ‘rightwing’ in the caption which I hoped would give people the idea that we didn’t approve of rightwing extremism, but I doubt anyone ever noticed that.”

More than anything, Smith regrets “Dan’s Crap Corner,” a part of the letters section where Sega Power shared the worst fan art it got by mail.

“Naturally I thought I was being hilarious and thankfully someone with more sense than me told me I was being insensitive,” Smith said. “The name was dropped and simply called ‘The Sega Power Gallery’ after a few issues, but it still haunts me and I’m deeply sorry for my callous actions and unintentional pain I may of caused to anyone who ever had a picture of theirs feature in Dan’s Crap Corner.” 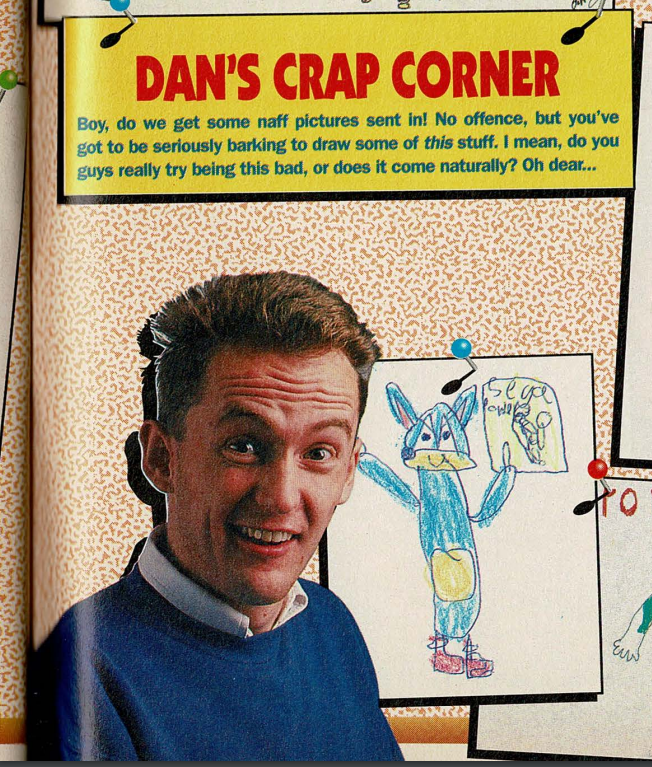 It’s hard to imagine that Smith or anyone else at Sega Power intended to do harm when they printed the Nazi Sonic image, but “naivety” is probably the right way to describe the decision. It was hard to imagine back in 1992, but the “gamer” identity, manufactured by marketing campaigns and defined by rejection of others, be they fans of competing consoles or women entirely, had dire consequences. The idea that one console is inherently better than another evolved into the idea that there’s a superior type of player, or the right way to play or like a video game. As we can see as early as 1992, this quickly evolved into a rivalry that jokes about violence.

A decade later, some of the people who were steeped in this culture and marketing went on to develop similar but more hateful views on exclusion in the form of gamergate. People were rejected and threatened with violence not just for what kind of games they liked and what consoles they played on, but their race or gender.

On one hand, labeling an image of a Nazi Sonic as "rightwing" seems to minimize a fascist, racist worldview. But on the other hand, it’s also very clear about what right-wing politics were and are. It’s an interesting sign of the times that a magazine thoughtless enough to run an image of a Nazi Sonic also felt that calling him "rightwing Sonic" was enough of a disclaimer to avoid accusations of endorsing Nazi fanart. Reactionary politics would spend the next couple decades obscuring their movement’s racism and fascism, and by the time they burst into the mainstream of gaming culture with Gamergate in 2014, they’d been successful enough that it took months or years before the movement was widely recognized as a home for extremist ideologies. If publishing the image was insensitive and "not woke" by today’s standards, the caption was at least not hand-wringing about whether it was being unfair to right-wingers when it called them Nazis.

Did a 1992 Nazi Sonic fan art predict all of that? Probably not, but the gaming culture eventually caught up with the worst way you could see that image today.