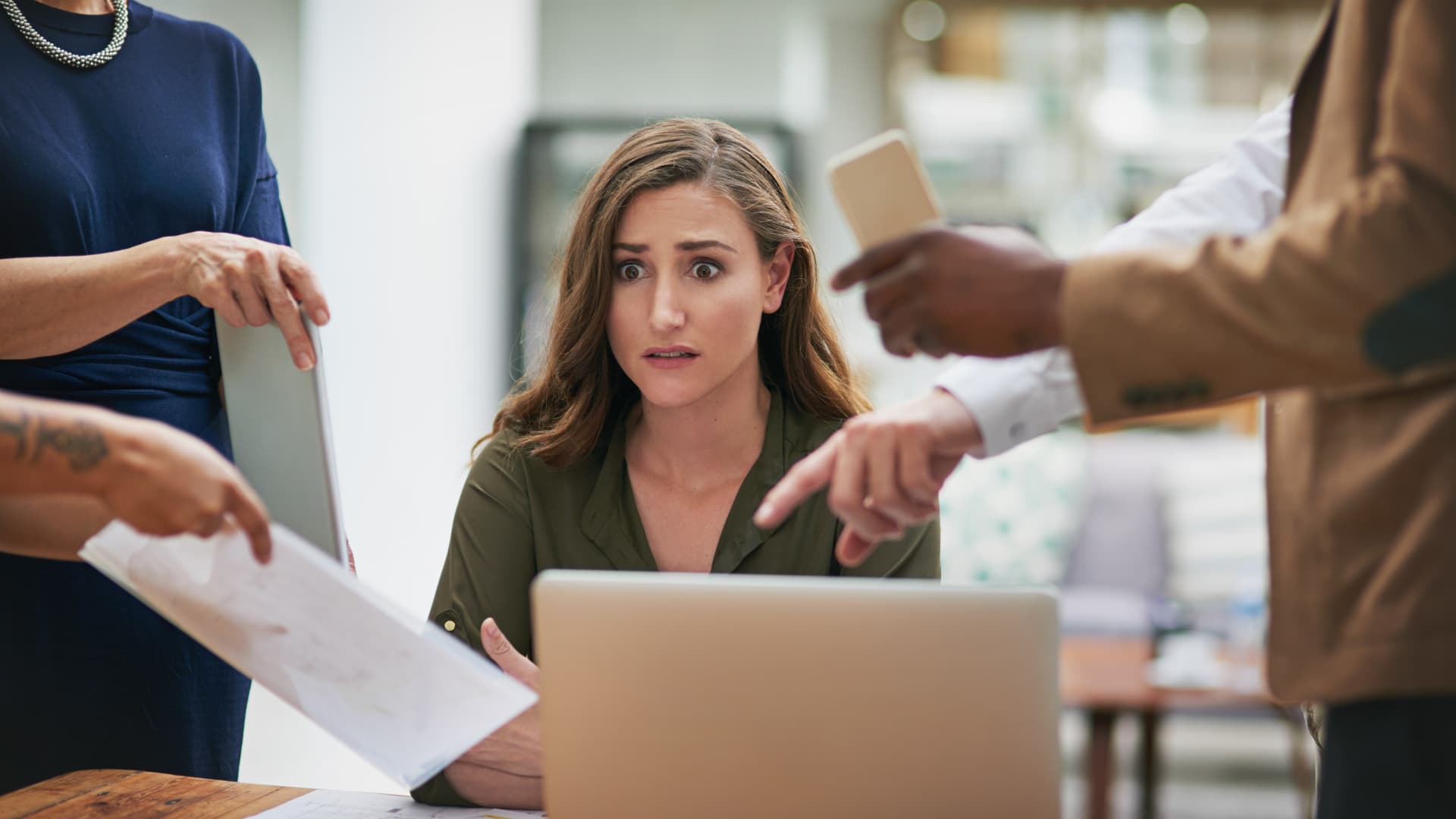 Why does work feel so dysfunctional right now? A psychologist, labor expert and CEO weigh in

Dysfunction in the Covid-era workforce has reached a fever pitch.

If you’ve talked to anyone about work in the last month, you’ve probably discussed quiet quitting (or setting boundaries), the not-so-quiet backlash from bosses, and even warnings of quiet firing (or managing out).

Railroad workers prepared to go on strike. Starbucks workers are unionizing. Teachers and nurses, burned out beyond belief in year three of the pandemic, say they’re reaching a breaking point.

All the while, the Great Resignation has become less of an anomaly as sky-high turnover every month has become the new norm. Even worries of a looming recession and mounting layoffs haven’t shaken workers’ confidence.

The power struggles between workers and bosses may have buzzy catchphrases now, but they’re really nothing new, says Sharon Block, professor and executive director of the Labor and Worklife Program at Harvard Law School.

“I’m not sure that work is any more dysfunctional now for many workers than it’s been in the past,” she tells CNBC Make It. What has shifted, though, is that the tight labor market of the last year-plus gives workers the upper hand to vocalize, even push back on, the unaccommodating ways work gets done. On an existential level, people are re-thinking how they fill their time (including spending less of it at work).

“The experiences of the pandemic have brought these conversations of dysfunction to the fore,” Block says. “More workers are speaking up and speaking out about the quality of their jobs in a way they haven’t before.”

Work has always been dysfunctional, our tolerance for it just got lower

Workers are still quitting in droves during the Great Resignation. Roughly 4 million people, or 3% of the workforce, have voluntarily left their jobs each month since April 2021. But with more than a year of headline-making turnover, the novelty of the moment is becoming more of the new normal, says Anthony Klotz, an organizational psychologist and UCL management professor who coined the term “Great Resignation” in 2021.

Despite high quits in the recovering Covid economy, Klotz agrees that today’s disruption in the workforce is similar to levels seen as recently as in 2019, then the tightest labor market on record.

“In many ways work was dysfunctional in 2019,” Klotz says. That was the year the World Health Organization officially recognized work burnout as an occupational hazard, for example. And workplace diversity, equity and inclusion efforts reignited during the pandemic address disparities that have long existed.

“There were people who felt like the world of work wasn’t sustainable in 2019, and then the pandemic happened,” he says.

Call it the Great Reawakening or Great Reshuffle (Klotz is fine with all of the Great Resignation offshoots, by the way), but it’s clear workers aren’t just walking away from bad jobs. They’re walking toward and rebuilding new ways of working. For example, remote work has given people a “glimmer of hope” that work can look different than it did in 2019, Klotz says.

The discord we’re seeing, then, is vocal pushback from employees — emboldened by a tight market and, yes, social media fervor — not wanting to return to traditional models of work, Klotz says.

“I don’t know if there’s more dysfunction so much as, in many cases, we’re saying: No, we’ve seen a better path, or we have this opportunity right now, to make the world of work better,” he says. “And there’s a frustration with people in power who aren’t seizing that opportunity.”

Is anyone happy at work?

Trends like the Great Resignation and quiet quitting are loud warnings that, to put it simply, people don’t like how work is done, according to Jon Clifton, CEO of Gallup and author of “Blind Spot: The Global Rise of Unhappiness and How Leaders Missed It.”

“Humanity is trying to figure out every way possible to get away from work,” he says. “The problem is the work environments that are created.”

While 20% employees around the world are thriving at work, according to Gallup, another 19% of workers are “downright miserable,” Clifton says.

“It’s not that they’re just emotionally detached,” he explains. “They’re angry about what’s happening at their workplace.” People who are miserable at work report more stress, anger, worry and even physical pain than people who are unemployed.

Clifton says many of the executives he speaks with think the biggest thing driving people to quit is long hours. But Gallup polling indicates people are quitting because of unfair treatment in the workplace.

The best way to keep people from “running” from work, Clifton says, is to create better work environments that address workers’ basic but unmet needs: clear expectations of the job, proper materials for people to do their best work, opportunities to learn and grow, and managers that guide them through it all.

At the end of the day, workers want respect and recognition, Clifton says: “There’s still an overwhelming amount of executives who think their employees are automatons, that you can give them all the same assignments and they should be able to do them with the same ability. That’s not true. Human beings are emotional, and there’s a gap in appreciation.”

A ‘quiet exploitation’ through coinciding crises

Beyond outright resignations, quiet quitting has caught fire as a polarizing way to signal that workers are no longer bending over backwards to go above and beyond at work when it doesn’t suit them.

Block, the Harvard professor, describes the trend as “troubling” as far as what it signals about worker sentiments, but a reasonable response given the circumstances.

Worker wages have remained stagnant for years, though productivity (and CEO paychecks) spiked during the pandemic, “so there’s this quiet exploitation where workers are contributing more and more to the economy and not seeing the benefits as they’re seeing corporate profits rise,” Block says.

“Everyone is making money off of their work, and they’re not getting return on the investment of their labor. To call that out and say, you know what, I don’t necessarily need to go above and beyond if that effort isn’t going to be valued — that’s not quiet quitting. It’s standing up for yourself.”

Some 71% of Americans now approve of labor unions, the highest level since 1965, according to Gallup. And the National Labor Relations Board reported a 57% increase in union election petitions filed during the first six months of fiscal year 2021.

Recent unionization efforts are centered around issues that have been on the table for decades, like access to paid leave, Block says. “You’re just seeing an increase in the wherewithal to actually stand up and talk about these issues.”

‘The genie’s out of the bottle’

Today, the Covid-era workplace is at another juncture. President Joe Biden declared the pandemic over, companies are ending their Covid sick leave, and corporate bosses are renewing calls to return to offices. Meanwhile, there were 424,339 reported Covid-19 cases and 2,973 deaths from the virus in the past week, according to Johns Hopkins University.

The Fed just made a “jumbo” interest rate hike, stoking another wave of recession fears. It could dampen some labor movement efforts and quiet some workplace discord if people are worried about their job security.

“There is certainly reason to believe tight labor market is contributing some to this increase in organizing,” Block says, “and the Fed has made clear their desire to rein in the labor market as a strategy to bring down inflation. It could take some of the wind out of the sails of union organizing.”

But she’s cautiously optimistic recent union wins will be enough momentum to keep workers advocating for better conditions: “The genie’s out of the bottle.”

Workers say this is the No. 1 reason they’ll quit

The best RTO perk that no one is talking about? Office gossip

Sign up now: Get smarter about your money and career with our weekly newsletter