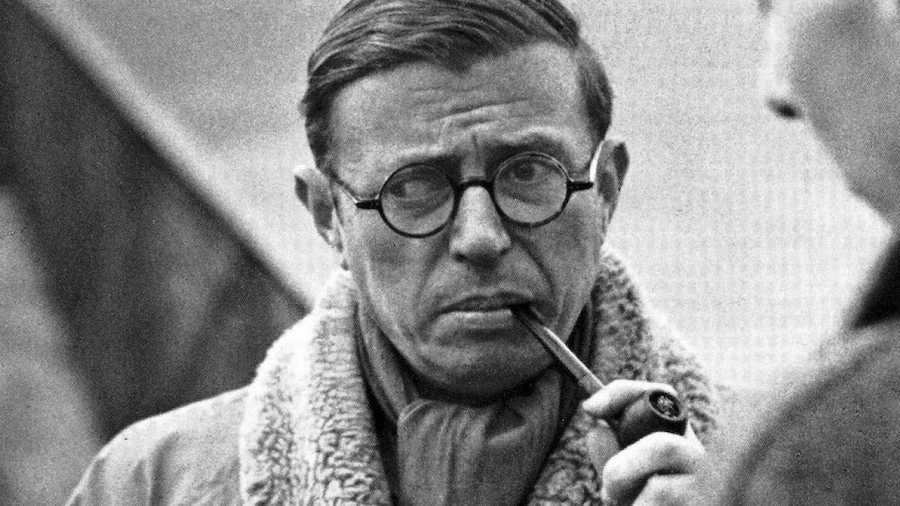 Why the World Needs Jean-Paul Sartre Now More Than Ever

Why the World Needs Jean-Paul Sartre Now More Than Ever

Many people think Sartre is a pessimistic philosopher. In his famous example of the drunk who wonders whether there’s a bottle on the table, without being able to see it, Sartre seems to suggest that we are conscious only of our own existence and not that of anything else. This has been understood as implying that we have no objective knowledge of the world and are condemned to a life of hopeless subjectivity. It might seem as if Sartre’s philosophy leaves us isolated and alienated from one another, forcing us to accept that our actions have no meaning beyond their consequences in terms of our own comfort. This interpretation misunderstands Sartre’s work. Sure, he was bleak about the implications of Modernism and its recognition that things exist independently from how they appear to human consciousness. He believed this left us with nothing but despairing awareness of our own meaningless existence: “The last Newfoundlander… will be the first man to end his solitary confinement.” But what he wrote also has something more optimistic at its core: There’s a way out. In this article, we’ll look at why so many people misunderstand Sartre and why that matters right now.

Why Jean-Paul Sartre Matters Now More than Ever

Over the last few years, Sartre’s work has seen a tremendous resurgence in popularity. This is because it speaks powerfully to the problems of our times and has a lot to offer in responding to them. In a world where people are increasingly isolated and many communities are under threat, Sartre’s philosophy offers a way to come together. Sartre’s philosophy is often misunderstood as pessimistic and focused on emphasizing human isolation. In fact, it is optimistic, emphasizing human connection and the importance of tolerance, understanding, and reconciliation. It offers an alternative to the perspectives that are currently driving the world towards increased polarization, intolerance, and fragmentation.

Sartre’s Explanation of Our Awareness of Nothingness

When talking about our awareness of nothingness, Sartre is not talking about a lack of things to be aware of. Rather, he is talking about our ability to be consciously aware of the fact that things exist independently from how they appear to us. This is the kind of awareness that allows us to know that the table is there even if we can’t see it because it’s hidden from view. While this doesn’t mean that we have knowledge of everything that exists beyond the things that are currently within our field of vision, it does mean that we have a very important kind of awareness. We are aware of the things that exist beyond the boundaries of our conscious perception of them. Thus, Sartre argues, we have a special kind of awareness that other entities do not have.

This awareness of nothingness is what leads us to the recognition that we are totally responsible for our own actions. We are not at the whims of whatever happens to cross our path. Instead, we are the ones who decide how to respond to it. In this way, Sartre argues that we are free. However, many people misunderstand this to mean that we could do absolutely anything we wanted to do. They think it means that we could just make things up and that they would thus become true. They think we could fly if we chose to just will ourselves into the air. However, Sartre does not mean that we can make anything we want to come about. Instead, he means that we are free in the sense that we are totally responsible for all of our actions. We are not at the whims of our biology or our environment. While we may have some biological impulses (for example, to eat when we’re hungry), we are not compelled to act on them.

As we’ve seen, Sartre’s philosophy recognizes that we are responsible for our actions in a way that other entities are not. However, we also have the capacity to deny or ignore this. We have the ability to make ourselves unaware of our own freedom to act and thus avoid the responsibility that goes along with it. This is what Sartre means by “bad faith.” People in bad faith are hypocrites. They’re people who are aware of their own freedom to act and yet still pretend as if they were not free. Sartre sees bad faith as the source of all human evil. He argues that, since all evil actions are ultimately rooted in a denial of freedom, we could never do something truly terrible unless we were in bad faith. This is, indeed, the only way to make sense of the fact that, in history, people have done truly horrific things. Sartre recognizes that human beings have the capacity for great evil and that, in certain situations, they have acted on that capacity.

Conclusion: Coming Together Through Tolerance, Understanding and Reconciliation

Sartre has much to teach us about how we can come together in our current political climate. He emphasizes the importance of tolerance and understanding. He argues that we should not condemn people for being in bad faith. He understands that most people are not in bad faith. Instead, he believes that it is a trap that we can escape from. Sartre does not believe that we can ever really understand another person’s actions. However, he does believe that we can recognize that other people are responsible for their own actions and have their own reasons for doing what they do. This is what we need to do in order to foster a tolerant and accepting society. Sartre knows that this is not easy, but he also recognizes that there is no other way out of our current situation.