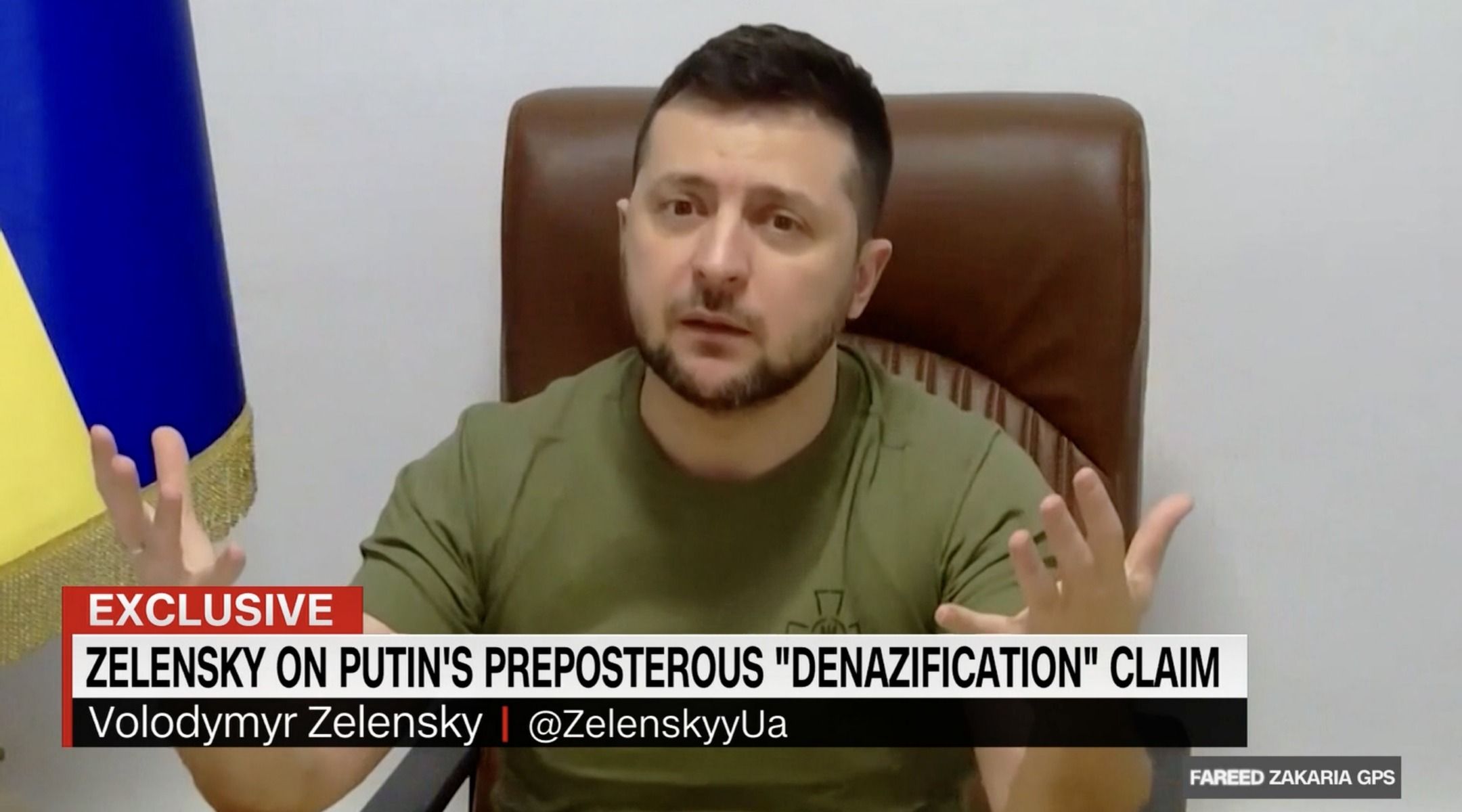 (JTA) — Ukrainian President Volodymyr Zelenskyy
‘s great-grandparents died when the Nazis burned their village, he said in an interview on CNN Monday
.

He also offered details about what happened to his grandfather’s parents that have not previously been reported in English.

“His father and his mother were killed in a terrible fire. The Nazis set ablaze the entire village where they lived and where my grandfather was born,” he said.

Zelensky did not name the village. But massacres by fire were part of the Nazi army’s playbook in Ukrainian territory and elsewhere. In one well known case, the village of Koryukovka
was burned in 1943 after its residents were shot in retaliation for partisan activity based there; the Jews of Koryukovka had largely been deported and murdered already.

Zelenskyy also did not mention the Holocaust or the fact that his grandparents were Jewish, even as Zakaria asked him to comment on Russian President Vladimir Putin’s “denazification” agenda
as “somebody who is of Jewish descent.” Instead, he talked about “the war.”

“When Russians are telling about neo-Nazis and they turn to me,” he said, “I just reply that I have lost my entire family in the war because all of them were exterminated during World War II.”

Jews from the former Soviet Union said Zelensky’s way of speaking about his family history was not surprising.

“Soviet policy after the war was one narrative: the Soviet people suffered greatly. The government would not acknowledge that the Nazis targeted the Jews specifically for extermination. They punished Soviet Jews who did not toe the party line,” Alex Zeldin, who was born in the Soviet Union and goes by Jewish Wonk online, wrote in a Twitter thread that has been shared thousands of times
.

“As a result of Soviet persecution and limiting the distribution of information about the Holocaust, later generations of Soviet Jews came to understand their family history as part of the war, even if it didn’t sound like other experiences (e.g., why did Jews have to hide?),” he added.

Zelenskyy’s interview with Zakaria — in which he relayed that he has “distant relatives” in the United States, Poland and Israel — came a day after he addressed Israeli lawmakers
, some of whom were rankled by Zelensky’s characterization of Ukrainians as having saved Jews during the Holocaust.

While 2,673 Ukrainians have been recognized by Yad Vashem,
Israel’s Holocaust memorial and museum, for their efforts to save Jews, Ukraine was also the site of notable collaboration between locals and their Nazi occupiers in the effort to murder Jews.

Zelenskyy’s speech reflected his strategy of devising pleas for support that are tailored to each of the countries he addresses. Both Israeli Prime Minister Naftali Bennett and Foreign Minister Yair Lapid indicated
that while they did not agree with Zelenskyy’s characterization of Holocaust history, they also were prepared to cut him slack because of the desperate situation his country faces.