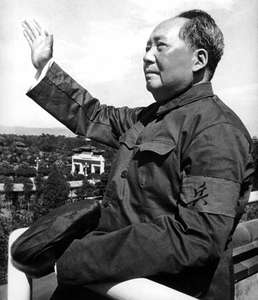 Answer: The short answer is that he supported the Maoists and the revolutionary leadership of Mao Zedong, but you’d have to make significant stretches to imagine Sartre’s political philosophy as Maoist.

The longer answer is that his motivations for supporting Mao/Maoists come from a very specific context, mostly understandable as the French Maoist opposition to the PCF (French Communist Party). In his dialogue with one of the French Maoist leaders in “It Is Right to Rebel,” it’s clear that he understood the French Maoists as an anti-authoritarian and decentralized alternative to the PCF …and a movement of the youth. Part of his understanding here is that the French Maoists were themselves not easily recognizable by the standards we’d think of Maoists today. In any case, he never considered himself a Maoist and clearly positions his support as critical.

You can read some of this online at: https://www.marxists.org/…/sartre/1974/right-to-rebel.htm and other texts in the same archive.

Even in this brief intro to “It is Right to Rebel,” Sartre is emphasizing his anarchist affinity (remember, in France at the time “Libertarian” and “Anarchist” are synonymous terms):

Sartre: If the reader wants to truly understand this book he must accompany us on the path we’ve taken from the first discussions up to the last. In other words, it’s not a matter of reading the experiences of a few people on a distant isle, ion an unknown continent; it’s a matter of seeing people who are the reader himself, of passing from a kind of necessity for the struggle to the idea in libertarian form in conjunction with current struggles.

Additionally, the wikipedia entry on Sartre makes the lighter, but similar point I articulate above:

Sartre always sympathized with the Left, and supported the French Communist Party (PCF) until the 1956 Soviet invasion of Hungary. Following the Liberation the PCF were infuriated by Sartre’s philosophy, which appeared to lure young French men and women away from the ideology of communism and into Sartre’s own existentialism. From 1956 onwards Sartre rejected the claims of the PCF to represent the French working classes, objecting to its “authoritarian tendencies”. In the late 1960s Sartre supported the Maoists, a movement that rejected the authority of established communist parties. However, despite aligning with the Maoists, Sartre said after the May events: “If one rereads all my books, one will realize that I have not changed profoundly, and that I have always remained an anarchist.” He would later explicitly allow himself to be called an anarchist.

In the long run, his quote above really is the most adequate description of his political philosophy. By any measure of the differences between anarchists and various Marxists, Sartre consistently takes positions on the side of the anarchists and this has been the case since some of his earliest writings …as highlighted in “Jean-Paul Sartre’s Anarchist Philosophy” by William L. Remley.

Some more summary insight from https://www.iep.utm.edu/sartre-p/ :

For most of his life, Sartre remained at a distance from party politics and articulated his political principles without reference to any existing parties. In 1948, however, he co-founded a short-lived non-Communist leftist party, the Rassemblement Démocratique Révolutionnaire. From 1952 to 1956 Sartre supported but did not join the French Communist Party. Later he became disillusioned by the soviet invasion of Hungary and distanced his vision of socialism from Soviet-style communism. In the last years of his life, Sartre associated himself with Maoist groups and took as a personal secretary the young Jewish-Egyptian Maoist Benny Lévy.

On the whole, Sartre’s contributions to Hegelian-Marxism are substantial. He forcefully argued against deterministic, structuralist versions of Marxism, inserting human subjectivity back into the equation. With a keen eye towards interpersonal relations, he showed that social struggle, whether among classes, races or interest groups, must be understood simultaneously at the psychological and the systemic level. Sartre, more than any Marxist of his generation, exposed the limits of classical Marxism and paved the way for a general critical theory of society.

Regarding the Rassemblement Démocratique Révolutionnaire…

Note the anarchist support of André Breton and Alexandre Hébert

From the French Wikipedia entry ( https://fr.wikipedia.org/wiki/Rassemblement_démocratique_révolutionnaire ):

The Democratic Revolutionary Rally (RDR) is a French militant party that was founded in the post-war period (late 1947-early 1948), among others by David Rousset, Georges Altman and Jean-Paul Sartre. The party did not last much more than a year.

More a movement than a party proper (it allowed, for example, dual membership), the RDR advocated a revolutionary and democratic socialism rejecting both the Stalinism of the French Communist Party and the reformism of the Social Democrats of the French Section of the Workers’ International: he thus sought to create a “third force” on the left, at once more revolutionary than the SFIO and more democratic than the PCF. However, because of its small size, he never had real political success.

Before the break-up of the RDR, Jean-Paul Sartre and Jean-René Chauvin produced what was called the “Chauvin-Sartre motion”.  This text marked the divergence of this current with the other current of the RDR led by David Rousset.

In the first issue of The Left, David Rousset writes that the objective of the RDR is “socialism, that is to say a society that has destroyed the exploitation of man by man, having suppressed classes”.  For Georges Altman, it is a question of asserting a true left-wing orientation, one that “makes strikes, revolts and revolutions against the exploiters and tyrants”, and which defends the principle: “to live free and to make equality”.  In number 4, the RDR is pronounced for “a free Democratic Revolutionary Federation of Peoples”.

The liberal philosopher Raymond Aron for his part considers this acronym oxymoric, believing that the revolution desired by the RDR can not be democratic.

The Jeunesses socialistes (about 20 000 adherents), led by André Essel and excluded from the SFIO at the end of 1947 because of the entry of the Trotskyists of the PCI, as well as the Socialist and Revolutionary Action (ASR), a trend of the SFIO led by Yves Dechezelles, join from its creation the RDR.

Former Trotskyists, such as Pierre Naville, Jean-René Chauvin (excluded from PCI because of his membership of the RDR), Gérard Rosenthal and Fred Zeller, are among them, as well as André Breton and Benjamin Péret; Jean Rous, leader of the SFIO and former Trotskyist, also (dual membership is allowed). Hubert Beuve-Méry and his newspaper Le Monde support the movement, which also counts with anarcho-syndicalists (Alexandre Hébert and the trade unionists of the Loire-Atlantique shipyards). We can also mention Roger Quilliot, who was a member of the JS, Jean-Joseph Cohen,  future Vice President of Family Planning, or Léon Boutbien, who is part of the Steering Committee and the party office.

The party had no real common point or social base (if not as a revolutionary anti-Stalinist orientation), so it failed quickly. Sartre later courted the PCF, while the Trotskyist Yvan Craipeau left to teach in Guadeloupe. Albert Demazière joined the League of Human Rights and Jean Rous created the newspaper Franc-Tireur.