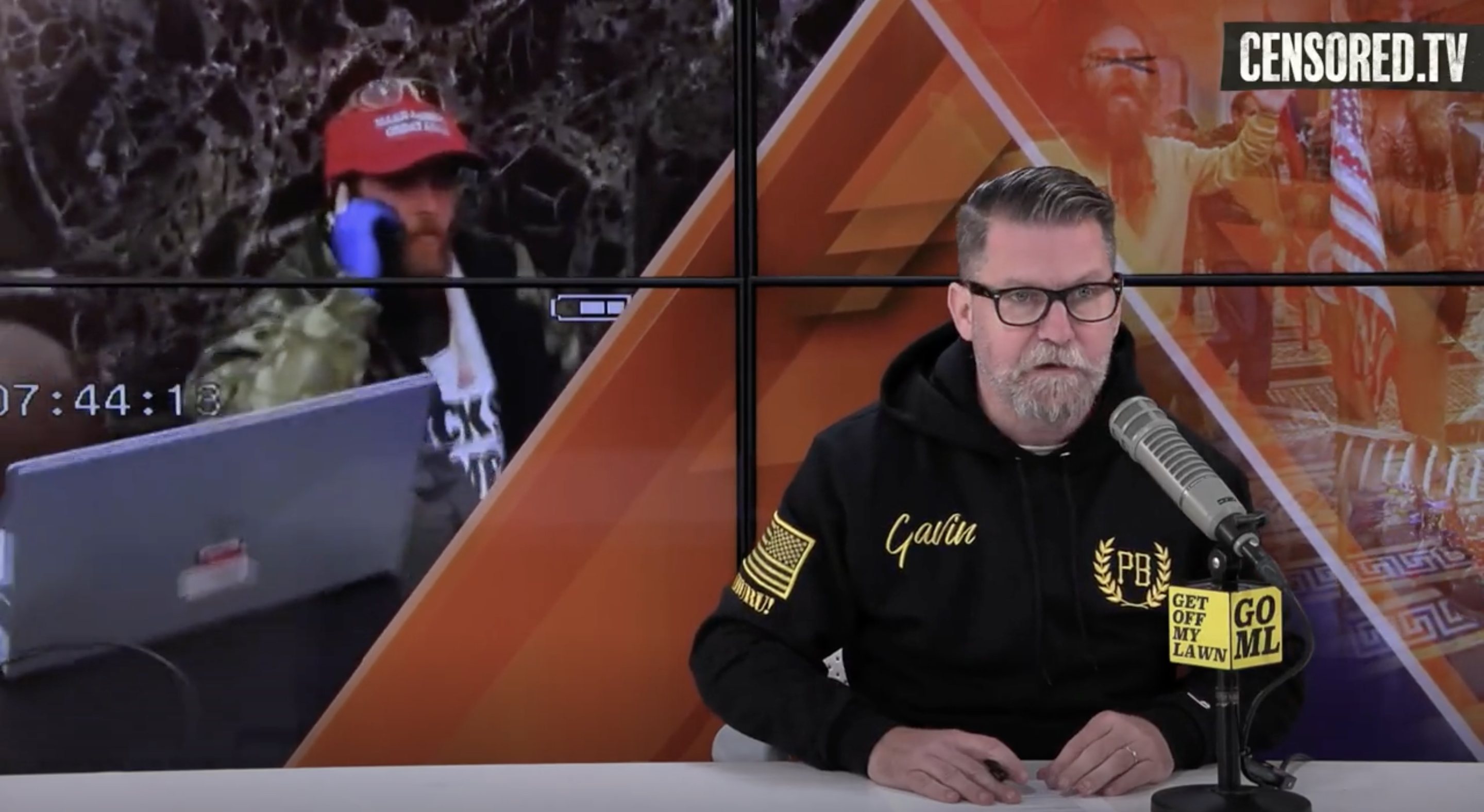 It’s been four years since Gavin McInnes announced he was leaving the Proud Boys, the far-right street-fighting gang that he founded in 2016.

But last week, for a special episode of his Get Off My Lawn podcast marking the one-year anniversary of the Jan. 6 Capitol riot, McInnes appeared wearing a black hoodie embroidered with his name in cursive writing and the gold Proud Boy logo clearly emblazoned across the front.

“Today we’re wearing Proud Boy regalia, as an homage to our brothers behind bars,” McInnes said.

The episode, titled “The Meandering,” featured interviews with Nick Ochs, one of the approximately 50 Proud Boys facing charges in connection with the attack on the Capitol, and two attorneys representing Proud Boys in their Jan. 6 cases.

In the hourlong episode, McInnes, 51, claimed that the Proud Boys were being unfairly punished. “Proud Boys are getting it worse than everyone because they’re Proud Boys, not because of what they did,” McInnes said.

The Jan. 6 anniversary was just the latest example of McInnes appearing to publicly associate himself again with the Proud Boys, raising fresh questions about his role and continuing influence on a group that’s become a household name since dozens of its members have been hit with serious federal charges in connection with the Capitol riot. (Disclosure: Gavin McInnes was a co-founder of VICE in the mid-1990s. He left the company in 2008 and has had no involvement since then. He founded the Proud Boys in 2016.)  Today, the Proud Boys claim to have 157 chapters in all states in the U.S. apart from Delaware, Wyoming, and Vermont. They also have chapters in the United Kingdom and Australia. Membership estimates range between thousands and tens of thousands.

When contacted by VICE News, McInnes responded by asking when this reporter would consider “relinquishing your obsession on the club” and didn’t address questions about his current ties to the Proud Boys.

In October, McInnes showed up in a video posted to a Telegram channel by Miami-based lawyer Gabriel Carrera, who has branded himself as the “Attorney That Rides.” In the video, both Carrera (who has denied being an official Proud Boy) and McInnes are wearing the group’s trademark black-and-gold Fred Perry polos. McInnes jokes that he’s making a “formal announcement” regarding “the club,” saying he’s planning an antifa-Proud Boy “love-in fest.” At the end of the clip, both Carrera and McInnes exclaim “Uhuru,” a slogan that Proud Boys like to bark at one another during rallies. Carrera did not respond to VICE News’ request for comment by the time of publication.

His decision to leave the group came at a particularly tense moment for the Proud Boys. Following a speaking appearance by McInnes at the Metropolitan Republican Club in Manhattan the previous month, uniformed Proud Boys marauded through the city, getting into violent brawls that were caught on security camera footage.

Of the 10 Proud Boys charged in connection with that incident, seven pleaded guilty, and two were hit with four-year prison sentences. McInnes claimed in his resignation video that he was stepping away from the group on the advice from his “legal team and law enforcement,” who told him “this gesture will help alleviate their sentencing.”

“This will show jurors they’re not dealing with a gang and there’s no head of operations,” McInnes said.

Former Proud Boy lawyer Jason Lee Van Dyke served as the group’s interregnum leader for just two days following McInnes’ resignation. During his very brief tenure, Van Dyke inadvertently released the names of eight Proud Boy “Elders.” Among them, Enrique Tarrio, from Florida, who took over as the group’s leader and has maintained that role since.

McInnes seemed to backtrack on his promise to permanently sever ties with the Proud Boys in September 2020, when, during a presidential debate, then-President Donald Trump said, “Proud Boys… stand back and stand by.” Trump’s words were interpreted by some listeners as tacit endorsement of Proud Boy activity (he later said he misspoke).

McInnes was streaming an episode of his podcast during the debate, and he appeared to nearly choke on his beer when he heard Trump’s words.

Later on, the Proud Boys posted the clip from the debate to their Parler channel, with the message “Sorry @gavinmcinnes but we got a new leader.”

VICE News identified at least five podcast episodes, dating back to when the archive on Censored.TV began, in March 2019, where McInnes was wearing Proud Boy insignia or the trademark Fred Perry shirt. (In the interest of transparency, on at least one occasion McInnes showed up wearing a T-shirt saying VICE, for an episode dedicated to analyzing old issues of VICE magazine.)  McInnes also regularly has current Proud Boys on his podcast.

McInnes’ most recent displays of affinity to the Proud Boys come as Tarrio sits in jail serving a 155-day sentence for vandalizing property belonging to a historically Black church during a Stop the Steal protest in D.C. prior to Jan. 6.

There’s been a cloud hanging over Tarrio’s leadership ever since Reuters published a bombshell report weeks after the Capitol riot, revealing that he was once a “prolific” informant for law enforcement. (Tarrio hasn’t denied working as an informant, but he says the details were blown out of proportion and that it was a long time ago). After the report came out, McInnes railed against Tarrio on his show.

A week later, he had Tarrio on the show to clear the air.

“I was very angry with him. I felt betrayed that he’d worked with the FBI and not told us,” said McInnes. “I don’t think he should have been chairman after working with the FBI.”

“If you’ve worked with the feds, you shouldn’t lead a club,” McInnes told him.

Tarrio insisted he wasn’t planning on running for reelection as chairman that September, and that he’d put a vote of no-confidence in himself to the membership. “They had reason to question me. There’s still some people who don’t like me, but welcome to reality,” said Tarrio.

McInnes has also criticized the direction of the Proud Boys under Tarrio, who helped organize high-profile, large-scale rallies through 2020 that drew considerable media attention and public scrutiny to the group. “I never quite understood the relentless rallying,” said McInnes. “Have you heard of this ‘Make Proud Boys Clandestine Again’ movement?… make them a secret organization again, just beer drinking and private meetings and that stuff.”

In the last year, the Proud Boys have moved away from the big rallies. But instead of going underground, they’re trying a new strategy: flying under the radar by embedding themselves in local politics and right-wing culture wars. VICE News recently published an article that identified 114 uniformed appearances by Proud Boys in 2021 following the Jan. 6 riots, in 73 cities across 24 states.

While McInnes weighs in more frequently on Proud Boy matters, Tarrio is due out of jail in a month. Despite saying he’d likely step away from his leadership role, Tarrio maintains the title of chairman.