Internal Slack messages from the meal kit delivery company HelloFresh show how it’s struggling to respond to ongoing union elections at its California and Colorado warehouses. In the messages, obtained by Motherboard, HelloFresh managers discuss monitoring employees who post about the union to social media, hiding union-related posts, attempting to delete a negative user review mentioning poor warehouse working conditions, and ignoring customers who have questions about the union.

The Slack messages also show how HelloFresh is trying to produce an anti-union video, specifically seeking to interview warehouse workers with “negative” experiences with unions who will tell their coworkers to “vote no” on forming a union.

These efforts coincide with a sophisticated campaign inside two of HelloFresh’s warehouses to persuade more than 1,000 workers who are in the midst of a union election to vote against the union. If workers vote to unionize, they’d be the first union in the booming meal-kit business.

Last week, HelloFresh managers contacted a freelance videographer to film and edit videos with testimonials from warehouse workers at its Richmond, California warehouse, according to internal Slack messages. 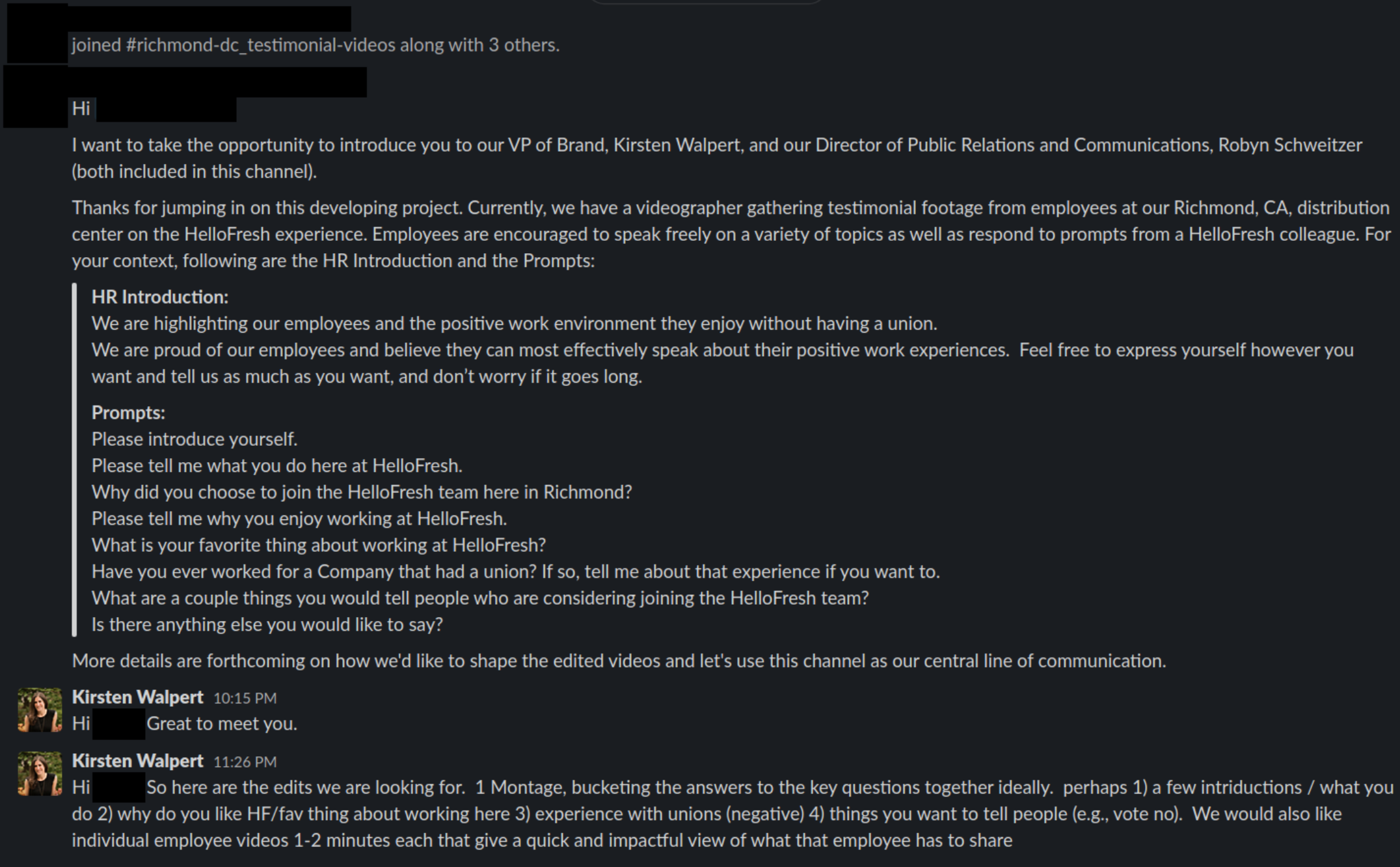 “Thanks for jumping in on this developing project,” a note from a HelloFresh senior video operations manager to the videographer on HelloFresh’s Slack said. “We are highlighting our employees and the positive work environment they enjoy without having a union. We are proud of our employees and believe they can most effectively speak about their positive work experiences.”

While those prompts might seem neutral, Kate Walpert, the company’s vice president of brand marketing, chimed in on Slack to make clear the company is looking for workers to discuss “negative” union experience and to tell coworkers to not vote for the union.

“Here are the edits we are looking for,” she said. “1. Montage, bucketing the answers to the key questions together ideally. Perhaps 1) a few introductions/what you do, 2. do you like HF/fav thing about working here 3) experience with unions (negative) 4) things you want to tell people (e.g. vote no).”

Do you have a tip to share with us? Please get in touch with Lauren Gurley, the reporter, via email at Lauren.gurley@vice.com or on Signal 201-897-2109.

Since at least September, HelloFresh’s branding, social media, and customer care teams have been tracking union-related posts on Twitter and Instagram using a social media marketing tool called Falcon and posting them to Slack.

“Hi team, does anyone remember seeing any posts about the unionization efforts from HelloFresh employees?” a social media strategist wrote on Slack.

“Would you like us to track any posts that are Employees from here on out?” they continued. “We are seeing more ‘customer’ tweets. Again not verified but claiming they are customers who will leave or have left us bc of the Union issue.”

“Yes, if you see any posts that say they’re employees, please flag them!” the social media strategist said.

HelloFresh’s customer care team, which is employed by a contractor called Sitel, has also been tasked with reporting social media posts about the union as spam, hiding posts, or removing them.

“We have 136 tweets, re-tweets, and mentions of the word Union for the past week. 54 of them are from ‘Unite Here’ on Twitter. We are not engaging. The [customer care] team is marking anything on Twitter as SPAM (let me know if you would rather they forward to me) and sharing any [Facebook] or comments,” the branding associate said.

“My 2 cents is that agents should not ever reply and that there should be a place to send social media comments/post, so only a few people reply if needed. I hope this helps,” they continued.

“Hopefully, this Union stuff goes away soon!” they wrote again to the Slack channel on October 1.

HelloFresh directed its customer care team to track but not to engage with social media posts about the union, but in some cases, users would contact the company about a delivery issue, then suddenly change the subject to the union, according to Slack messages.

“Please do not engage if the comment mentioned Unions, even if the first part was asking for help,” the branding associate wrote. “They are trying to get us to engage so please do not ask for them to [direct message] us right now.”

“We have customers only asking for help, saying something is happening with their deliveries. There [isn’t] previous history or comments, it looks real, like someone asking for help,” a Sitel customer care worker wrote. “After we offer help and ask them to [direct message] us directly, they send us messages about the union. If they mention something about the union, would you consider it better for us to delete our response offering help? There is no way to recognize who really needs help and who just wants us to engage. It’s tricky.”

In one case, a customer care representative attempted to delete a customer’s review on Google that mentioned cancelling a HelloFresh subscription because of the company’s treatment of workers.

“Customer and employee feedback that is volunteered to the Company—positive or negative—is important to us,” a spokesperson for HelloFresh told Motherboard. “Using official HelloFresh accounts to communicate with customers allows us to ensure that comments and concerns are being handled appropriately. Additionally, it is our duty to correct misinformation and mischaracterizations of our company.”

“We respect our employees’ right to vote for or against being represented by a union,” they continued. “Our goal has and always will be to present the facts about HelloFresh so employees can make informed decisions.”

After Motherboard reached out to HelloFresh for comment for this story, all of the Slack channels that had union-related posts were made private, a HelloFresh tech worker confirmed to Motherboard.

Since the union drive at HelloFresh began, union avoidance consultants descended on HelloFresh warehouses to hold mandatory anti-union meetings. Management passed out face masks and beanies emblazoned with “Vote No” messaging, and launched an anti-union website, in English, Spanish, and Mam, an indigenous Mayan language spoken by workers at some of its facilities.

In September, Motherboard reported that hundred of workers at HelloFresh facilities in Richmond, California and Aurora, Colorado, were unionizing with the hotel, casino, and food processing workers union, UNITE HERE, to address concerns about injuries, workplace safety during COVID-19, wages, benefits, and mistreatment from managers.

"We want to break the cycle that so many of us at HelloFresh are under," Mary Williams, a unionizing pack line worker at the Aurora site who earns $15 an hour, told Motherboard at the time. "It’s a cycle of low-paying work and having to work back-to-back jobs. We believe that having a union will really change things."

Roughly 400 meal kit workers began voting on whether to join UNITE HERE at the Aurora facility on October 28. Another 770 HelloFresh workers at the Richmond factory started voting on November 18. Ballots will be counted on November 22 and December 10.

In response to the company’s handling of the union drive, HelloFresh’s white-collar tech worker employees have spoken out on Slack, and have begun taking action.

“I found out via the news that some US warehouse employees are voting to create a union because of their current working conditions,” an employee wrote on a Slack channel called Berlin Advice on November 11. “I could not find any internal /public response from HelloFresh about this. This situation as well as the lack of communication is negatively affecting my employee experience, and how I feel about my company…. These testimonies are heartbreaking.” The post received more than 100 comments and reactions on Slack.

“This is beyond sad,” another employee posted with a link to a video about HelloFresh’s campaign to discredit the union published by the nonprofit news outlet More Perfect Union. More Perfect Union says that HelloFresh filed a takedown request for the video that got the video removed, but it reuploaded it to the internet.

In the video, HelloFresh workers spoke out about having their arms and legs broken and feet crushed during workplace accidents. Other workers described facing severe housing insecurity and homeless, and working two jobs to make ends meet.

During an all-hands meeting on November 12, the company avoided responding to employees’ concerns and questions about the union drive, according to an open letter to the company’s CEO that more than 50 HelloFresh tech workers wrote this week.

"I sent three questions about the union and all of them were censored,"  a HelloFresh employee who wished to remain anonymous because they feared retaliation told VICE.

The HelloFresh tech workers who wrote the letter are organizing on an encrypted messaging app, Motherboard has confirmed. In their letter to management, they demanded HelloFresh end its campaign against unionization and cancel its contract with the union avoidance firm Kulture Consulting.

“If HelloFresh is truly as egoless, data-driven, and agile as we claim, we expect to see action on the [action] points immediately,” the HelloFresh tech workers wrote.

On November 11, a HelloFresh marketing manager in Berlin posted the viral tweet from More Perfect Union about HelloFresh attempting to get its video removed from the internet in the company’s Slack. “Hi guys- this is escalating pretty quickly in the US,” they wrote, linking to the tweet from More Perfect Union. “Not sure what we can do with publishers, negative keywords, or something but we will need to keep an eye on where our ads appear.”

A social media manager also posted about hiding a Motherboard article on the union drive. And Cezanne Huq, HelloFresh’s vice president of growth, said that news articles about the union drive should be shared as PDFs instead of links on HelloFresh Slack “so that we’re not bolstering through clicks.”

In Slack posts from early October, HelloFresh talked about reaching out to influencer, advertising, and audio partners about negative media coverage and the union drive. HelloFresh partners with the actress Mindy Kaling, who launched a “sit-com style” series of cooking videos on YouTube in partnership with the company earlier this year, and Queer Eye star Antoni Porowski.

“In light of the increasing PR issues we are currently experiencing re: Unionization within our DCS [distribution centers] & organizations like ‘Unite Here!’ reaching out to top advertising partners, we are going to start taking a more proactive approach including sending out a note with additional information to top partners ASAP vs. waiting for them to receive outreach,” HelloFresh’s director of integrated media wrote. “We were previously taking a more reactive approach so as not to create more buzz, but it seems we need to shift our approach as this is gaining a bit of traction.”

The director later posted a HelloFresh response “to be personalized” and sent directly to influencer and audio partners. “We are aware that mischaracterizations and misinformation about HelloFresh have been recently shared by some groups,” the response reads. “Please know that these do not represent an accurate picture of our company and our values. We believe in taking care of our employees and are an employer of choice in every community in which we operate.”

“In recent days, HelloFresh has ramped up its increasingly nasty anti-union campaign, using tactics that are downright immoral, like printing anti-union messages on PPE and cold weather gear and handing out disparaging content about the union,” D. Taylor, the president of UNITE HERE, which represents roughly 300,000 workers in the United States and Canada, told Motherboard.

“If you’re a HelloFresh customer, a HelloFresh white collar worker, or a content creator that has partnered with the company, NOW is the time to act in support of workers who prep and assemble meal kits and speak with management,” Taylor said.