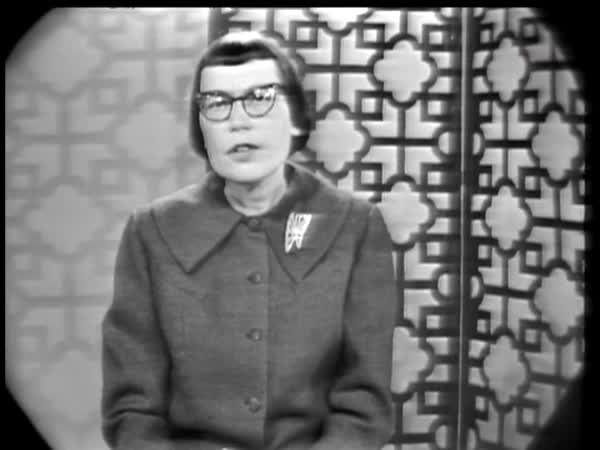 From: http://americanarchive.org/
Self Encounter is a series designed to explain and illustrate the most important principles of existential philosophy, and the implications of their application to everyday life and problems. The title suggests the two themes of the series: one, an explanation of the existential thesis that man must meet and recognize himself honestly, without recourse to myths or vain or supernatural hopes; two, the attempt to draw each viewer of the series into a closer and more careful understanding of himself. The technique used to clarify these themes is a combination of lecture and drama. Dr. Hazel E. Barnes, professor of classics at the University of Colorado and a noted student of existential philosophy, is the host for the series. She describes, in a direct, almost lecture style, the themes and topics most important to an understanding of existentialism. Her comments alternate with scenes from plays or novels by noted authors whose work reflect, or explain, existentialism; these dramatizations, performed by students at the University of Colorado, do much to clarify the material Dr. Barnes has been discussing.
The series was produced by KRMA-TV, Denver.
The 10 half-hour episodes that comprise this series were originally recorded on videotape.

Self Encounter Episode 1: Being and Nothingness

To introduce the series, Dr. Barnes discusses the definition of existentialism, explaining this philosophy’s attempt to redefine the nature of man and to provide an answer to the question, “What does it mean to be human?” She also supplies a distinction between humanistic and religious existentialism, and describes the theory of “process” or “becoming” as it applies to man considered existentially. Her lecture is illustrated by short scenes form Pirandello’s Six Characters in Search of an Author and Eugene O’Neill’s Long Day’s Journey Into Night, and a brief reading from Simone de Beauvoir’s She Came to Stay.

Self Encounter Episode 2: The Far Side of Despair

This episode begins with a scene from Sartre’s play The Devil and the Good Lord in which a priest and a layman debate on the existence of God. Then Dr. Hazel Barnes appears to discuss man’s forlornness and despair when he has rejected the idea of the existence of God. Other scenes from The Devil and The Good Lord and The Flies (also by Sartre) illustrate some problems that face existential atheists: Is man free from the absolute if God does not exist? If God does not exist to provide a moral code, is man then permitted everything? Sartre, says Dr. Barnes, was among the first to explore at length the moral implications of atheism. In the scenes from these plays, for which she provides introductions and explanations, these implications are presented dramatically and effectively.

Self Encounter Episode 3: To Leap or Not to Leap

This episode is largely an introduction to the work of Albert Camus, for whom the chief problem man must face is whether or not to commit suicide. The absurd, the hideous, the cruel surroundings in which man must live, his nausea at the prospect of living – these might impel him to take his own life. If, however, man does not commit suicide, what should he do with his life? How can he make it less empty? Can man live a meaningful life without an appeal to some higher purpose or Being? How should man create for himself a meaningful pattern of life? Does the world offer some reason for living? All these questions are clarified and illustrated on this episode.

Bad faith, the title and subject of this episode, is, explains Dr. Barnes, tantamount to original sin for the existentialists: bad faith consists of self-deception. Most often, man wishes to deceive himself about his freedom and consequent responsibility for is actions. He chooses to believe that he lives in a universe of absolute, exterior values, according to which he is obliged to judge his behavior; in fact, however, he is constantly changing or reinterpreting these “absolute” values when they do not suit him. Thus he deceives himself about his way of behaving. Man also deceives others, by being one “person” for himself in private and another for others, in public. The existentialist, who believes that life is a process, realizes that there is no single consistent “I”; he acts so that whatever he is at the moment is revealed and acted upon honestly, whether he is alone or with others. The bad faith, which results either in self-deception and self-righteousness or in cynicism, governs our relations with ourselves and others, living or dead. Man’s obligation is honesty and good faith, and a willingness to accept mankind for its good qualities. Scenes performed here were taken from two plays by Sartre, Kean (from which the Broadway musical with Alfred Drake was derived) and Nekrassov, and from Albert Camus’ The Fall.

Self Encounter Episode 5: Hell is Others

The episode begins with a scene from Sartre’s No Exit, from which comes the famous quotation, “Hell is other people.” Dr. Barnes takes this as her text, and explains how existentialism views man’s relationship with other men. We are at the same time subject and object of a relationship; we are obliged, therefore, to learn how to govern ourselves in both situations. The choices are: first, domination of the other, which in its extreme form leads to sadism; second, indifference to others, in which others are invariably regarded as objects; third, hate of others, which leads to a desire to eliminate all others. The path of love, in which one becomes object as well as subject, offers a release from these paths and a chance to lead a productive and contented life. In addition to the scene from No Exit, dramatizations of The Mandarins and She Came to Stay, by Simone de Beauvoir are performed.

Self Encounter Episode 6: A Psychology of Freedom

Many men have tried to explain man’s freedom, or lack of it. To those who deny that man is free, existentialism offers a counter-proposal: man is free to choose his life and act on it. He need not be bound by subconscious traumas, by his environment, by even the facts of history, states Dr. Barnes, although, as she explains it, Freudian psychology, determinism, and behaviorist psychology say he must be. Man is free, and must be willing to accept his freedom and act in accordance with it; he must believe in his freedom and in the freedom of others. This is the main theme of the episode: it is carefully explained by Dr. Barnes, and illustrated by scenes from Sartre’s The Flies and The Condemned of Altona and Simone de Beauvoir’s The Mandarins.

If, as the existentialists postulate, man is free, it might be thought that he need not have any responsibility for other, equally free men. If he could enter into a relationship of responsibility with other men, what pattern should this relationship assume? Secondly, if man is responsible for other men (and they for him), how can the thesis of human freedom and independence be maintained? The balancing of what appear to be conflicting ideas of freedom and responsibility occupies Dr. Barnes for the duration of this episode; as usual, her comments are supported and illustrated by enacted scenes, in this case from Simone de Beauvoir’s The Blood of Others and Sartre’s The Devil and the Good Lord.

Assuming that one has accepted the existentialist theory of human freedom, what, asks Dr. Barnes, should our attitude be towards the political and social applications and implications of that theory? Man must engage his freedom, must choose to commit himself to something. Traditionally, existentialists have assumed political postures veering toward the left, since these coincide with the existentialist belief in mans responsibility for other men. But what should man agree to in trying to implement the political policies he believes in? Should one be more devoted to an ideal than to the men who implement it? Can one make exceptions to ones political beliefs if one thinks they will conflict between ends and means? These questions are explored both through commentary by Dr. Barnes and scenes from Sartres Dirty Hands and In the Mesh and Camus The Just Assassins.

Self Encounter Episode 9: All Men are Mortal

How does man react to the knowledge that he must die? Most usually, says Dr. Barnes, he admits that other men must die but does not relate death to himself, until he becomes ill or faces grave danger. To avoid being nothing we strive to be all. It is this that pushes us towards creativity; it is the hope of achieving something lasting that will provide us with a continuing existence after our death. (Horace: I shall build me a monument more lasting than stone. Shakespeare: So long as men shall breathe and eyes shall see, So long lives this and this gives life to thee.) Is there truly a life after death? Should one hope for it even though it may not be? If you were offered immortality, would you have the courage to accept it? These points are dramatically illustrated by scenes from Miguel de Unamunos The Madness of Dr. Montarco and Simone de Beauvoirs All Men Aare Mortal.

Self Encounter Episode 10: Sin Without God

This episode deals with the way the religious existentialist and the humanistic existentialist look at the subject of sin. To those who believe in God, the concept of sin makes sense. But what becomes of good and evil, right and wrong, if there is not God to refer to? Can there be sin without God? Some say there can be, that sin takes place in the gap between what man is and what he aspires to be. Dr. Barnes relates this view of sin to the existentialist idea of freedom. Pointing up these philosophical questions are scenes from Camus The Plague and the play Native Son by Paul Green and Richard Wright. There is considerable dramatic impact in the excerpt from Native Son, which shows a Negro on trial for murder. This is its theme: This man committed a crime, but society mad him what he is, and thus society itself is on trial. The scene illustrates quite well a point that Dr. Barnes is seeking to make.