The Terrific Visual Novel Renaissance of Vampire: The Masquerade

In the 57 years since the 2019 announcement of Bloodlines 2, fans of the World of Darkness have watched in (the wrong kind of) horror as our hopes for a worthy sequel to Troika’s Vampire: The Masquerade – Bloodlines have evaporated in a flurry of departed leads and dropped developers.

But we don’t need a AAA Action-RPG to sate our desire for games that take full advantage of the long shadows, ancient plots, and mildly discomfiting eroticism of the World of Darkness. Bloodlines 1 is a classic, but we don’t have to shackle ourselves to its blueprint. If we look past our hunger for another immersive sim, we can find a set of visual novels and choose-your-own-adventures that have been obscured by their big-budget sibling, but which have grasped something essential about their setting and turned it into a collection of fascinating, if imperfect, gameplay experiences.

The aesthetic star of the show is the VNs. Draw Distance’s Coteries of New York and Shadows of New York both take place in the ever-moonlit NYC of Vampire: The Masquerade. It’s a gorgeous, haunted world inhabited by scheming cabals of dread supermodels and their vapid, grinning retainers, rendered in static images that could have been pulled right out from Vampire’s sourcebooks. Heart of the Forest — a Werewolf: The Apocalypse game from Different Tales — trades this in for the primeval Białowieża Forest, depicted in Dave McKean-style collages that alternate between the quiet, mournful placidity of the doomed woodland and the feverish, symbolistic, semi-hallucinatory violence of its lupine protectors. It’s utterly transfixing. The pearlescent smiles of the worst people in the world are replaced by dirt and fur and blood, but HotF is no less striking for it. 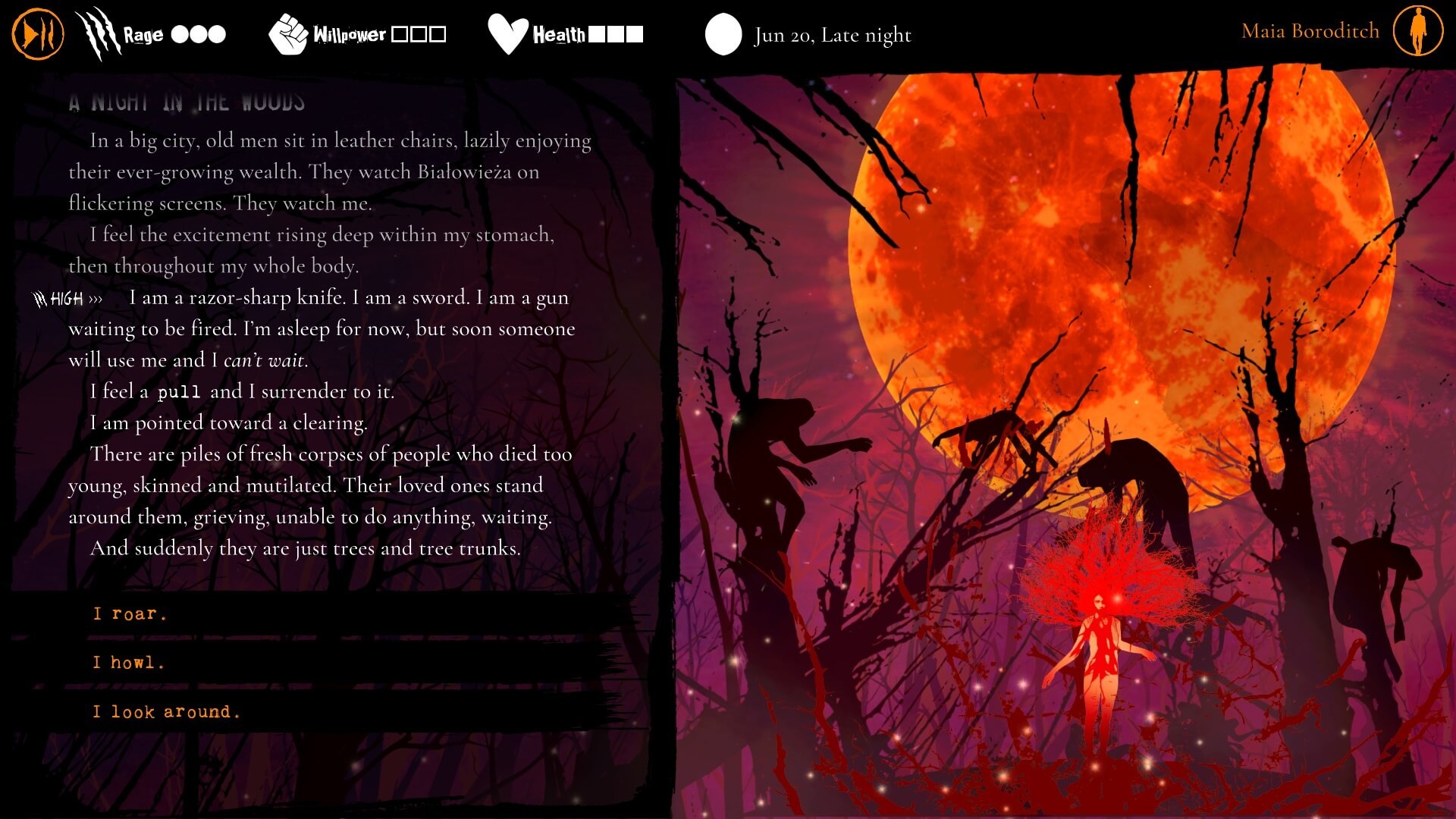 ‘Werewolf: The Apocalypse – Heart of the Forest’ screenshot courtesy of Different Tales

Each game draws on one of the better parts of the World of Darkness’ latest editions by rooting itself firmly in the present. Bloodlines 1, whatever its merits, always had one foot in the feudal: its antagonists were foppish lordlings, arrogant occultists, and the things that go bump in the night. They had the form but not the substance of horror; scary only in the sense that, yes, it certainly would be unpleasant to be trapped in a room with them. But I am not, and have never been, at risk of a flesh-wizard reconfiguring my bones into a chair. Maybe one day.

I am, however, familiar with the quotidian horror of a world choked white in the grip of a rapacious ruling class, and these games capture that sublimely. The VNs recognize that the banal daily workings of both the supernatural and human haut monde are infinitely more horrifying than even the most perverse blood mage. The protagonists of each game are hemmed in on all sides by an incestuous network of venomous social climbers, governments, and business interests. HotF is about expending great effort to wage a single battle in a losing war for the natural world, while both New York games focus on navigating a society in which you are always somehow working towards interests which are not your own. Put your body on the gears if you like, the machine won’t even stutter as it chews you up and finds a new sucker to replace you. It will only end when, one day, the ancient Antediluvians awaken and annihilate both exploiters and exploited with a lazy wave of the hand.

Seek out criticism of these VNs and you’ll find a chorus of people displeased at the lack of genuine choice and consequence. They’re right. Coteries has effectively one ending, and its attempt to add texture and differentiation to separate playthroughs with a tabletop-style discipline and ‘blood points’ system only really succeeds in irritating you. Shadows, wisely, throws the whole thing out in favour of a binary ending that hinges on a few key narrative decisions. But that’s fine; their strengths lie elsewhere, and for those seeking a tabletop-style experience of the World of Darkness, the text-based CYOAs Night Road and Out for Blood, from Choice of Games, fill the niche very well.

The text games don’t scintillate in the same way the VNs do; they lack the artwork and soundtracks, for one thing. But if what you sought from Bloodlines 2 was the stat-heavy, choice-driven story of the Troika original, you could do far worse than these text adventures, which have all the energy of a fun, short tabletop Vampire campaign run by a very lenient gamemaster. The decisions come thick and fast, and while the story doubtless has safety rails, they’re pretty hard to see amid your various possible responses to every situation. 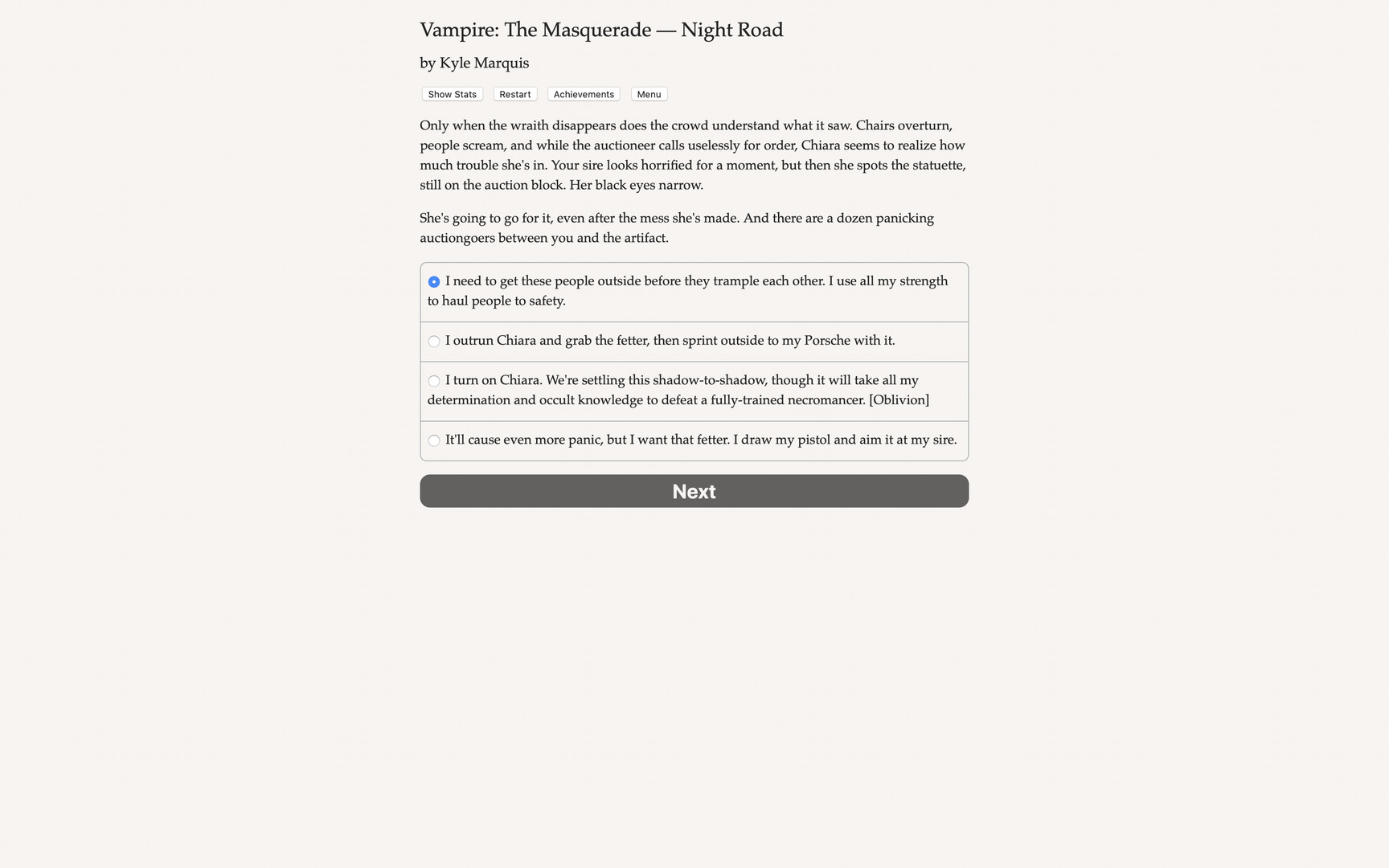 In fact, these text adventures are so committed to furnishing players with choices that it borders on comical. There’s such a variety of viable builds that it sometimes feels impossible to actually mess up. Ever resolved a Mexican standoff by applying your years of scholarly research abilities you honed at university? I have. I think I might have done it multiple times, even. But even this calls to mind the experience of pleading with a GM to let you use your strongest skill in a situation where it’s thoroughly inapplicable. Besides, a certain likeable artlessness is hardly out of step with the rest of the World of Darkness.

So while we sit Linus-like for the Great Pumpkin of ‘a cool vampire game’, maybe set some time aside for these smaller experiences. Whether Paradox’s ‘once more, with feeling’ approach to Bloodlines 2’s development creates something worthwhile is an open question, but an irrelevant one. For us, the World of Darkness is already here.