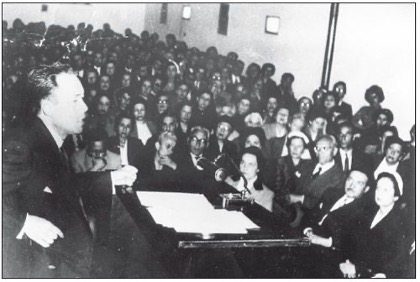 Camus’ journalistic itinerary, the premise of his openness of thought to the anarchist current, and the role of Rirette Maîtrejean

A systematic analysis of Camus’ relationship with libertarians could not be limited to philosophical and literary aspects alone. We must insist on topical debates. And, as far as Camus is concerned, they are not very comprehensible for those who do not have a detailed knowledge of his journalistic work. This is where the vast field of friendly relations that united Camus with French anarchism opens up, a fact little analyzed up to the present. Because Albert Camus not only participated in anarchist newspapers as editor and permanent collaborator, for Témoins for example, but he also acted: as a witness, he defended libertarians in court; for example Maurice Laisant, at the time head of Le Monde Libertaire, accused of being the instigator of an anti-militarist and anti-colonialist poster campaign against the Indochina war of 1945 (see the article republished here).

During the forties and fifties, Camus maintained friendly relations with several leaders of French-speaking anarchist publications. Those that linked him to Rirette Maîtrejean (1887-1968) deserve a separate mention. Rirette Maîtrejean, co-editor of the newspaper L’Anarchie before the First World War, was the one who sensitized Camus to libertarian thought and discovered the anarchist milieu to him. This happened during their common drifts with the team of the newspaper Paris-Soir in the three months following the exodus from Paris in 1940. Rirette Maîtrejean would later write for Témoins, where he would meet Camus again. Among the other leaders of libertarian organizations who maintained friendly relations with Camus, we will mention Maurice Joyeux and Maurice Laisant, of Le Monde Libertaire; Jean-Paul Samson and Robert Proix, of the cultural and antimilitarist review Témoins; Pierre Monatte, of La Révolution Prolétarienne; Louis Lecoin, of Défense de l’Homme and Liberté; Gaston Leval and Georges Fontenis, of Libertaire. This work reproduces Camus’s contributions to these titles, but also the responses to the debates they provoked. Camus also maintained friendly ties beyond the French-speaking countries, in particular with Giovanna Berneri, of Volontà (Italy), and with José Ester Borrás and Fernando Gómez Peláez, of Solidaridad Obrera (a Spanish anarcho-syndicalist publication edited in Paris, a subject addressed by Freddy Gómez, son of Fernando, in a contribution to this work). On the other hand, Camus had contact with Swedish (Arbetaren), German (Die Freie Gesellschaft) and Latin American (Reconstruir, from Buenos Aires, and Babel, from Montevideo) anarcho-syndicalist newspapers.

For example, in a conversation on the Algerian issue, Helmut Rüdiger makes clear the personal relations he had with Camus:

In an interview, Camus declared to me unequivocally that the FLN was, in his opinion, a totalitarian movement. There may be different opinions on this subject, the literature and publications of the FLN can be interpreted [sic]. On the other hand, a large number of trade unionists share Camus’ opinion and think that the future of Algeria can only be based on the cooperation of the rival movements, which today are mercilessly killing each other.

Rüdiger was a contributor to Die Freie Gesellschaft, a post-war German libertarian socialist journal, and also to the Swedish anarcho-syndicalist newspaper Arbetaren. During the Spanish revolution, Rüdiger served as secretary of the International Workers’ Association (IWA), whose headquarters were in Paris. After 1939, he lived in Sweden and was one of the most important theoreticians of the Swedish anarcho-syndicalist movement. According to information from Hans Jürgen Degen, a great acquaintance of Rüdiger, the latter met Camus on several occasions. In 1957, on the occasion of Camus’ stay in Sweden for the awarding of the Nobel Prize, he gave an interview in French to the magazine Arbetaren for the magazine Demain, dated October 24, 1957. Camus, for his part, visited the premises of the Sveriges Arbetaren Centralorganisation (SAC), the Swedish anarcho-syndicalist organization, and its printing house in Stockholm. It seems that other meetings between Rüdiger and Camus took place in Paris. Camus’ knowledge of Swedish anarcho-syndicalism came first from Louis Lecoin, of La Révolution Prolétarienne, and then from Rüdiger. This Swedish syndicalist could express himself perfectly well in French. Moreover, it was Rüdiger who translated into Swedish the articles by Camus published in Arbetaren.

Although Camus’ uncle, Gustave Acault, and his university professor, Jean Grenier, encouraged him to read writers such as Fourier, Zola, etc., it was his experiences during his time in Algiers and Oran in the late 1930s that most facilitated his predisposition towards libertarian analyses. He was soon excluded from the Communist Party (1937). At least from the revolt of the Asturian miners in 1934 onwards, Camus closely observed the events in Republican Spain, strongly dominated by the anarcho-syndicalist movement. Because of his relations with Francine Faure (his second wife), he was regularly present in Spanish immigrant circles, especially those of Oran. The report of these visits and the series of articles in Alger Républicain on the colonial exploitation of the Kabyle population, and finally the censorship that affected Le Soir Républicain led him to support pacifist positions. This attitude appears clearly in his articles in Le Soir Républicain of 1939 and 1940, often written in collaboration with Pascal Pia. They are not reproduced here, since Le Soir Républicain did not officially qualify itself as “libertarian” and Camus’ articles, often written under a pseudonym, did not categorically coincide with anarchist themes. Nevertheless, events had pushed Camus and Pia to take radical positions.

For example, in the “Manifeste du conformisme intégral”, Camus and Pia presented a satire of statist conformism and censorship. In “Profession de foi”, they described themselves as pacifists and criticized France’s “professional nationalism”. In “Notre position” they defended the individual right to conscientious objection during World War II-a commitment that will return, for Camus, through his collaboration with Louis Lecoin and the monthly Liberté in the 1950s on the occasion of the Algerian war. However, Camus and Pia were not in a position of calm, they criticized governmental pacifism and the Munich agreements of 1938. In “Comment aller vers un ordre nouveau”, Camus warned against the dynamism and cruelty of war, and advocated a cease-fire. On the other hand, Czechoslovakia and Poland did not have to be his victims. Already at this time, Camus launched the idea of a League of Nations that should not be subject to the will of nation states. In the post-war series of articles “Ni victimes, ni bourreaux” (“Neither victims, nor executioners”), he again argued in favor of a world parliament elected by direct suffrage.

Some articles in Le Soir Républicain presented a political analysis of society that could easily be shared by the anarchists of the time. This is what clearly emerges from the “Fondements juridiques de la liberté”, where Camus and Pia study the internal evolution of France and note that the capitalist and democratic states are not capable of defending themselves against the fascist dictatorships of the time and that, moreover, they themselves show a tendency towards dictatorship. In France, this tendency manifests itself by the promulgation of undemocratic governmental decrees (as in Germany with Papen/Schleicher) and, in Algeria, in the form of a declared military dictatorship. Thus, bourgeois and capitalist democracies are not understood as an alternative to fascism, but as a precursor to it, which was a typical anarchist analysis of that time, which had already manifested itself in the readings of German and Italian evolution up to fascism and National Socialism.

Even if Le Soir Républicain did not present itself as an anarchist newspaper, the reading of its articles clearly shows why one of Camus’ biographers, Herbert R. Lottman, could affirm the contrary, that is to say that Pia and Camus “did not take long to turn it into an anarchist organ”. It is a reproach that the financier Jean-Pierre Faure – not related to Francine Faure – had also formulated; surprised by the “anarchist course” of the newspaper, he wanted to interrupt his financial support at the precise moment when the military censor prohibited it. Camus himself defined his role in Le Soir Républicain as provoked by political events. And this opened him to the anarchist movement.

However, a second event was necessary for Camus to become really acquainted with the history and thought of the libertarian tradition. This decisive event was, as we have already said, his meeting with Rirette Maîtrejean before, during and after the exodus from Paris with the team of secretaries, typographers and proofreaders of the bourgeois newspaper Paris-Soir. Indeed, Rirette Maîtrejean worked there as a proofreader. Before the First World War, she was co-editor of the newspaper L’Anarchie with her friend the Belgian anarchist Victor Kibálchich, who later took the name of Victor Serge. According to Rirette Maîtrejean, there was even a meeting between Camus and Serge before the exodus from Paris. At that time, a cordial relationship was born at the Platine between Camus, editorial secretary or editor, and the book workers, typographers, proofreaders and printers, often of anarchist or anarcho-syndicalist tendency. Over the course of about three months, Rirette Maîtrejean and Camus saw each other frequently, during the exodus from Clermont to Lyon. It was then that Rirette almost initiated Camus into the libertarian tradition of France. That experience laid the foundations of a strong and lasting friendship between the two. Camus met Rirette again in the 1950s during his collaboration with Témoins. With Robert Proix, he even took the initiative of organizing meetings with revolutionary syndicalists and anarchists who collaborated with Témoins, either at Rirette Maîtrejean’s house or at his home. These meetings were attended by, among others, Pierre Monatte, André Prudhommeaux, Gaston Leval, Georges Navel, Daniel Martinet and Gilbert Walusinski.

André Prudhommeaux, who wrote under the pseudonym of André Prunier in several libertarian newspapers, was the one who described Camus, in 1948, on the occasion of a debate with the Cercle des Étudiants Anarchistes, as “a libertarian sympathizer and one who knows anarchist thought very well”. The meeting with Rirette Maîtrejean had much to do with it.